A CHEEKY Prince Philip today joked with a soldier about his weight as he returned to work three years after his retirement. 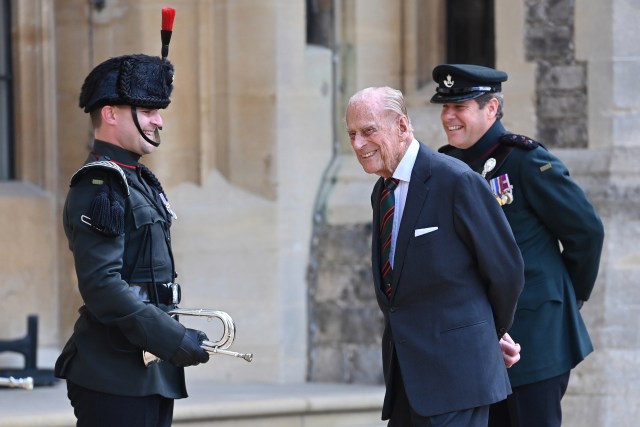 The sprightly 99-year-old royal appeared in good spirits as he made the rare public appearance this afternoon to pass on his role as Colonel-in-Chief of The Rifles to Camilla Parker Bowles.

And Philip – who is known for his gaffes that are not always politically correct – shared a chuckle with Lance Corporal Colin Streetin, 33, as he met four buglers at the event at Windsor Castle.

The pair were pictured laughing together – with L/Cpl Streetin later saying Philip had quizzed him about his other work when he wasn’t playing the bugle.

The musician said he highlighted his work as an assault pioneer, providing engineering support to frontline troops.

The soldier said he told the duke: “We’re assault pioneers as well”, and he replied “Oh, you’re keeping up your fitness then?”

He added: “But he looked me up and down and I thought ‘Are you trying to say I’m fat?’ – that’s what we were laughing about. He’s a very fit man himself for 99. Just incredible.”

L/Cpl Streetin said the ceremony had meant a lot to himself and his colleagues, saying: “In my lifetime I don’t think I will ever do anything like this again. I don’t think the Colonel-in-Chief will change again in the time I’ll be doing it.

“So it’s been a great honour to step in. Someone of his character, his charisma, you can’t go wrong.

At Windsor Castle, four buglers from the Band and Bugles of The Rifles stood to attention when the duke – who served as a Royal Navy officer during the Second World War – walked down the steps of the Equerries’ Entrance.

Fit Philip stood ram-rod straight and listened as he was thanked for his 67 years of support for The Rifles, and their forming and antecedent regiments, by Assistant Colonel Commandant Major General Tom Copinger-Symes.

The duke appeared to be in good health – despite having a hip replacement in 2018 and spending a night in hospital just six months ago – waving and smiling as he chatted with officers standing to attention in the quadrangle at Windsor Castle.

After chatting to the four buglers taking part in the ceremony the duke was off following a wave and a “thank you”, and he walked back inside the castle.

The ceremony comes almost three years after the Queen’s husband bowed out of public office following 65 years of service.

The Duke of Edinburgh has been one of the hardest working royals during his decades of service by Her Majesty’s side – conducting 22,219 solo engagements since 1952 including 637 overseas tours.

Today’s return to royal duties saw him pass the special military title into the good hands of his daughter-in-law, the Duchess of Cornwall.

And moments after the ceremony in Windsor, Camilla, 73, was welcomed as the new colonel-in-chief by The Rifles’ Colonel Commandant, General Sir Patrick Sanders in Highgrove House in Gloucestershire, 100 miles from Philip in Berkshire.

Speaking before the ceremony, General Sanders said: “We feel it’s a bittersweet day because we’re enormously proud of our association with the Duke of Edinburgh who has been the most amazing Colonel-in-Chief and we’ve really flourished under his tenure.

“But it’s also really special to have the Duchess of Cornwall coming in because she has a long association with The Rifles.

“She has been absolutely inspiring and the support that she’s given and the way that she sustained that through some quite difficult and bloody tours.”

It is understood that the duke had been asked by The Rifles if they could mark his service with today’s event and the 99-year-old was happy to agree.

Major General Copinger-Symes said they could not have been “more lucky” in having the duke as their Colonel-in-Chief, and highlighting some of his qualities added: “The ability to make an instant connection with Riflemen, whether junior or senior, of all ranks.

“And just to be able to put them at their ease and get the best from them and leave them feeling like they’re the only person in the room – or indeed the quadrangle of Windsor Castle – which you saw in the eyes of the buglers.”

Prince Philip today looked like he had never retired, donning a sharp suit with a green and red tie for the event today.

Meanwhile Camilla, the 73-year-old wife of Prince Charles, wore a Rifles brooch for today’s ceremony on a bespoke green dress based on the Rifles’ uniform.

It was complete with buttons with a bugle design on them – the same buttons as worn on the soldiers’ tunics.

July 22 is celebrated each year by The Rifles as their Regimental Day, which commemorates the Battle of Salamanca during the Peninsula War in 1812, at which all four forming regiments of The Rifles fought together and were victorious against the army of Napoleon.

The duchess has been Royal Colonel of 4th Battalion The Rifles since 2007 and will continue to hold the position.

She supported the battalion during the Iraq and Afghanistan conflicts, writing to next of kin, sending letters to the injured, and meeting families – as well as the traditional medals parades.

Most recently, Camilla visited New Normandy Barracks in Aldershot in May last year to present service medals and meet members of the battalion and their families.

The duchess also has personal links to military organisations connected to her father, Major Bruce Shand, who was awarded two Military Crosses.

Two battalions of The Rifles today form part of the celebrated 7th Infantry Brigade, otherwise known as the Desert Rats, with whom Major Shand served, and the duchess is patron of The Desert Rats Association.

The Duke of Edinburgh has been isolating with the Queen in Windsor since March 19.

However, Buckingham Palace today confirmed the couple would travel to Balmoral Castle in Aberdeenshire for their annual summer break in early August.

It’s the first time the couple will travel after relocating to Windsor for the coronavirus lockdown.

A palace spokesman said: “The Queen and The Duke Of Edinburgh plan to move to Balmoral Castle in early August to commence their annual summer stay.

“All arrangements will be in line with the relevant guidelines and advice.”

Prince Philip officially stepped down as a full-time working royal in August 2017 when he was 96, carrying out his last duty in the backyard of Buckingham Palace.

The 99-year-old has previously been described as the Queen’s “constant strength” and has been known as the “Protector” of the Royal Family.

And despite stepping down from official engagements, he has continued to attend family events.

PRINCE Philip has accompanied the Queen around the world multiple times in the 70 years they have been married.

But he hasn’t always been the best at diplomacy, making several gaffes while on duty.

Last week, he attended the secret wedding of Princess Beatrice and Edoardo Mapelli Mozzi with the Queen, maintaining a safe two-metre distance from other guests throughout.

Earlier this year, he again stepped out of retirement to issue an address to the nation to praise frontline workers in the fight against coronavirus.

Philip was recently pictured with the Queen at Windsor to mark his 99th birthday in June.

He was also seen at a big event when he was a guest at Lady Gabriella Windsor’s wedding in May 2019.

https://imasdk.googleapis.com/js/core/bridge3.398.1_en.html#goog_986264682 The Queen describes Prince Philip as ‘her constant strength’ because ‘family is so important to her’, royal expert reveals