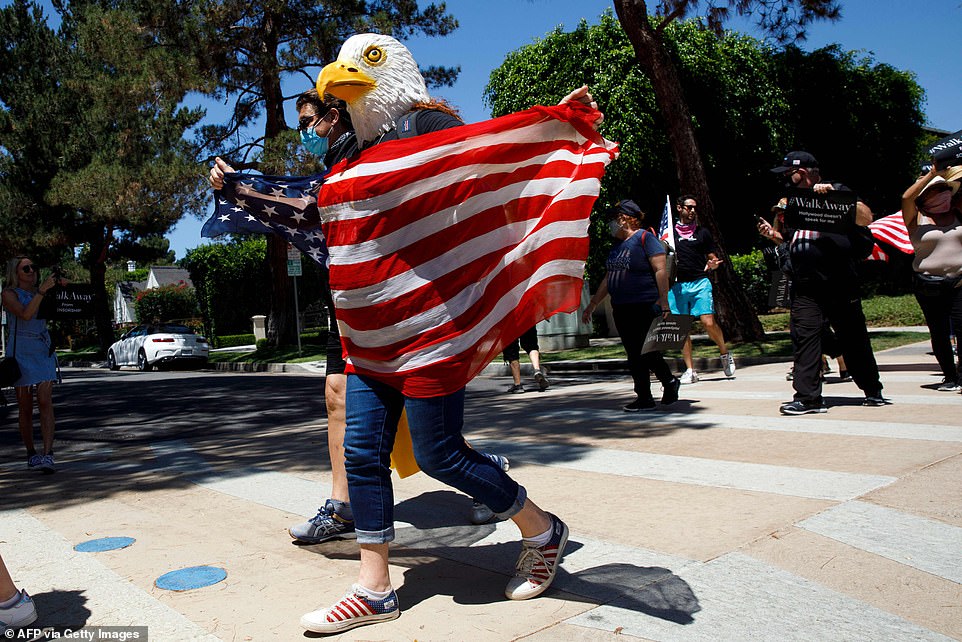 Hundreds of President Trump supporters descended onto the streets of Beverly Hills to protest property destruction and the ‘villainization’ of police while two similar demonstrations were held in Texas.

These counter-demonstrations are in response to a series of anti-racism and Black Lives Matter protests that have gripped the country since George Floyd‘s death on Memorial Day.

At the heart of such protests are a staunch distaste for law enforcement, which has been increasingly scrutinized for using excessive force, racial profiling and brutality.

President Trump has on several occasions labeled Black Lives Matter protesters as liberal ‘anarchists,’ but he was dubbed hypocritical in light of conservative citizens brandishing firearms during anti-lockdown demonstrations.

On Saturday, a crowd of around 200 Americans carried signs reading ‘Trump 2020’ as they marched from West Hollywood to Beverly Hills.

These protests appear to be in response to a number of police brutality demonstrations that were sparked three months ago with the death of George Floyd in Minneapolis, Minnesota

Pictured: Several Americans who attended the event held signs that read ‘walk away,’ ‘Trump 2020’ and paired them with a number of large American flags

Many of the signs displayed were reportedly meant to urge liberals and Democrats to ‘walk away.’

By 2pm, the demonstration doubled to 400 protesters as they gathered at the Beverly Hills sign at Beverly Gardens Park.

At one point during the demonstration, a white Black Lives Matter counter-protester was confronted by a group of irate Trump supporters.

It’s unclear what exactly was said, but one man can be seen getting close to the counter-protester’s face and points for him to leave.

Pictured: A demonstrator wears an eagle mask and holds a US flag during as they march in support of the US president during a WalkAway rally on Saturday in Beverly Hills

The march was hosted by #WalkAwayFoundation, which was founded in 2018 and encourages liberals to ‘walk away’ from the Democratic Party

Although the #WalkAwayFoundation event was mostly attended by Trump supporters, some Black Lives Matter and anti-police brutality residents showed up

KTLA reports that the event was organized by the #WalkAwayFoundation, which was founded in 2018 by Brandon Straka from New York City.

The #WalkAwayFoundation, which started as a social media campaign, grew into a nonprofit organization that ‘encourages and supports those on the Left to walk away from the divisive tenets endorsed and mandated by the Democratic Party of today.’

The scores of pro-Trump protesters in California on Saturday were speaking out against ‘destruction of property and lives, the villainization of law enforcement, and the weaponization of tragedies’.

The group is most likely referring to a number of Confederate statues that have been damaged, toppled over and removed since protest began three months ago.

A number of Americans, including Black Lives Matter demonstrators, have said Confederate statues should be removed because of their connection to slavery and racism in America.

Similar arguments have been made about the controversial Confederate emblem, which last month was officially removed from Mississippi state flag.

The group also appears to be disparagingly referring to the national attention the deaths of George Floyd, Breonna Taylor and several other minorities who were killed in police custody.

Those deaths have galvanized much of the United States and brought a renewed energy to removing racial inequality from several institutions.

In addition to Straka, the protest was visited by singer-songwriter Joy Villa, actors Scott Baio and Lorenzo Lamas, and conservative activists like Ricky Rebel and Mike Harlow.

Among the 400 pro-Trump protesters were actors Lorenzo Lamas (left) and Scott Baio, who spoke to the crowd at one point during the event

Pictured: A demonstrator wears a face mask reading ‘This mask is as useless as our governor’ referring to the governor of California during a WalkAway rally on Saturday

Demonstrators wave flags as they gather in support of the US president during a WalkAway rally at Beverly Gardens Park on August 8, 2020 in Beverly Hills, California

The #WalkAwayFoundation specifically held Saturday’s protests to fight ‘destruction of property and lives, the villainization of law enforcement, and the weaponization of tragedies’

Three woman carrying an American flag and a pro-law enforcement flag cross the street in Beverly Hills, California, as a large group of demonstrators stand adjacent

We Have Rights, the protest organizer, demanded on its website that Newsom fully reopen California from public health restrictions implemented to curb COVID-19.

California was among a number of states that rolled back lockdown restrictions in May, but since then COVID-19 infections and deaths have skyrocketed across the state.

Los Angeles County has taken the brunt of the pandemic with  207,000 infections and nearly 5,000 deaths.

Pictured: a protester holds a sign reading ‘fanning the flames of freedom’ during a demonstration railing against California Gov. Gavin Newsom

We Have Rights: ”We have the right to work and we can do so while exercising preventative safety measures. ‘We CANNOT SURVIVE this shutdown any longer!’ Pictured: a man holds a sign reading ‘Open CA…Close Newscum’

Indoor activities at restaurants, bars, museums, zoos and entertainment spots were once again shuttered as the state surpassed 7,000 deaths at the time.

‘We are demanding that Newsom FULLY REOPEN CALIFORNIA NOW. We demand our rights are restored, ‘We Have Rights wrote.

‘We have the right to work and we can do so while exercising preventative safety measures. ‘We CANNOT SURVIVE this shutdown any longer’

‘People have been stripped of their rights to freedom of religion. They have no right to shut us down from our churches. The right to practice your religion free from government interference is absolutely essential freedom to every person. This government overreach violates 1st amendment rights and WE WON’T STAND FOR IT!’

Photos taken at the Recall Newsom Beach Party showed people waving ‘We have rights’ and ‘fanning the flames of freedom’ signs.

Other signs urged for churches to fully reopen and one banner read, ‘Open CA…Close Newscum.’

California was among a number of states that rolled back lockdown restrictions in May, but since then COVID-19 infections and deaths have skyrocketed across the state

An organization called Silent No More – We Back Our Protectors gathered outside of the Williamson County Precinct 1 Constable’s Office in Round Rock, CBS Austin reports.

The demonstration would take residents to a number of police departments in different cities in the Austin-area. The event will also take place on Sunday, when protesters will visit three police departments before lunching at the American Legion.

‘We shall stay silent no more! Join us in a two-day weekend to let your community police department officers and sheriff’s deputies know they are NOT alone,’ the group wrote on Facebook.

‘They are appreciated and loved. They have support from the community they protect with their lives. It is time we stand up and speak!’

Bikers Backing Blue in Austin rode in support of law enforcement on Saturday in Austin, Texas, as police are scrutinized across the nation

Bikers Backing Blue in Austin urged attendees to be vocal about their support, noting ‘Being peaceful in no way means being passive. We want you to be LOUD and PROUD of our actions’

Pictured: Latinos For Trump host a rally at Sunrise Mall in Corpus Christi, Texas, on Friday as the November election nears

A number of Bikers Backing Blue in Austin also met outside the Travis County Courthouse at noon.

Organizers told attendees that they should be ready to ‘recite the pledge of allegiance and offer a prayer for our leaders, our country, and its citizens.’ while there.

The group urged its demonstrators to be loud with their support for law enforcement.

‘Being peaceful in no way means being passive. We want you to be LOUD and PROUD of our actions,’ they wrote.

‘Plan on afterward, having a “Roaring of the Engines” moment as an exclamation point on our purpose, Bikers Backing Blue!

‘Nothing will change until those of us who love this country, express that love in a greater, more dominant way than those who hate it. Only then will we be heard for ours is a Just cause!