Leo Tolstoy vs. the Police 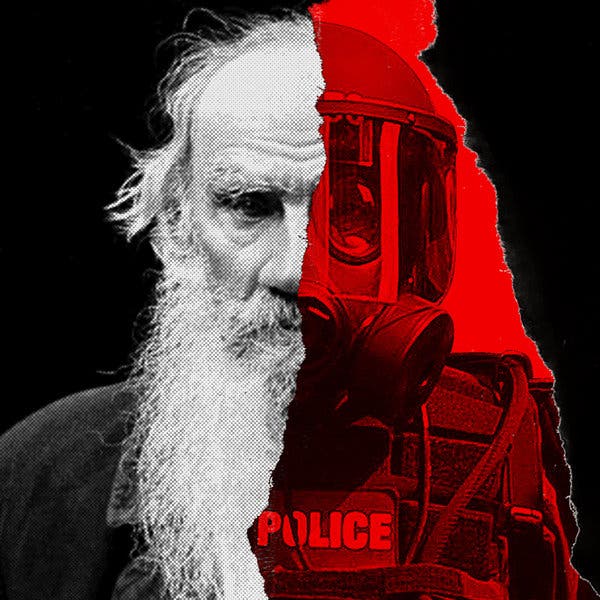 In the early months of lockdown, many people stuck at home found themselves turning to unusual sources of comfort: Gov. Andrew Cuomo’s PowerPoint presentations, bread-baking (especially, for reasons unclear, sourdough) and “War and Peace,” Leo Tolstoy’s 1,200-page novel about the Napoleonic era in Russia.

Gathering online around the hashtag #TolstoyTogether, readers perhaps unsurprisingly found themselves drawn to a book about a country grappling with uncertainty and ordinary people subjected to the whims of mercurial and ineffectual political leaders. For all of its literary force and physical heft (this last often cited as explanation for why the book made for an ideal pandemic distraction), “War and Peace” seemed to me insufficiently radical for the present moment, particularly given the breadth of Tolstoy’s social thought. In the early days of the pandemic, I found myself gravitating instead to “The Death of Ivan Ilyich” (1886), Tolstoy’s novella about a wealthy and ambitious court official who succumbs to an illness that mystifies his doctors; in sickness, Ivan Ilyich finds clarity — he realizes how much his society is structured to value profits over people.

Tolstoy was drawn to seekers, to characters perpetually in the throes of spiritual crisis; George Orwell described them as figures “struggling to make their souls.” Indeed, Tolstoy saw emergencies, personal and social, as necessary ruptures that could spark a deeper questioning of society and the beliefs that supported it. Of his own spiritual reawakening, captured in his memoir “A Confession” (1882), he described feeling as though the ground beneath him had collapsed. It is no wonder, then, that readers are finding new urgency in his work at a time when the racial and economic inequities revealed by Covid-19 and police killings have inspired unprecedented numbers of people to begin questioning some of this country’s foundational myths. With calls to defund the police, many are asking, for the first time in their lives, not just how our institutions function but whether they should exist at all.

One of Tolstoy’s seekers who found himself on such a path is Ivan Vassilievich, the protagonist of his 1903 short story “After the Ball.” Ivan is a young society man who falls in love with the daughter of a colonel, and plans to enlist himself until a fateful early-morning walk. He has spent the previous night at a ball in town, dancing with the daughter, a “bony” young beauty named Varenka: “Though I was a fancier of champagne,” he reflects, “I did not drink, because, without any wine, I was drunk with love.” However, Ivan falls as much in love with Varenka’s father, a kind and gentle-seeming man, who, Ivan tenderly notes, wears plain boots to the ball because he prefers to spend all his extra money on his daughter. After the ball, Ivan returns home, but is still so full of enchantment that he cannot sleep.

Instead, he takes a walk across the snowy streets in the direction of Varenka’s home, but when he arrives, he encounters a confounding scene: “Soldiers in black uniforms were standing in two rows facing each other, holding their guns at their sides and not moving. Behind them stood the drummer and fifer, ceaselessly repeating the same unpleasant, shrill melody.” It is a military gantlet and the accused, a young Tatar officer (Tatars were an ethnic minority in Russia), is being punished for desertion. Ivan looks on, frozen, as the young man’s body becomes bloodied: “His whole body jerking, his feet splashing through the melting snow, the punished man moved toward me under a shower of blows.” Ivan sees that the colonel leading the procession is none other than Varenka’s father, the man he thought of only hours before as loving and warm. Ivan runs off, desperately trying to forget what he has just witnessed. It is no use, though; as he attempts to sleep, he continues to hear the young officer’s plea: “Have mercy, brothers.” Ivan decides not to enlist, and he wonders whether it’s possible to participate in a society where such violence is not only carried out but sanctioned by the state.

“After the Ball” was written in what scholars call Tolstoy’s post-conversion period, beginning around 1879, when he started to turn away from fiction to focus on political applications of his Christian faith (which manifested as a kind of anarchism). During this period, which made up roughly the last three decades of his life, Tolstoy wrote moral treatises and powerful essays calling for the dissolution of private property, the abolition of the state and the end of military conscription.

Tolstoy’s views, particularly his strong invective against state-sponsored violence, riled authorities who consequently placed the writer under near constant police surveillance. His later works were censored in Russia and available largely abroad, in translation. His antiwar stance was even given as a reason for denying him the Nobel Prize in Literature. The secretary of the Swedish Academy rejected his nomination, claiming, in part, that Tolstoy, by preaching pacifism, had “denied the right of both individuals and nations to self-defense.”

“After the Ball” in fact belongs to a late chapter in Tolstoy’s long-simmering critique of state violence. As a young soldier fighting in the Caucasus and, later, in Crimea, he wrote in his diaries about the gruesome scenes of violence he witnessed up close. In many ways, “War and Peace” was meant as a corrective to popular histories and fictions about war that glorified battle; Tolstoy instead showed war as disorienting, chaotic and humbling. Those views eventually turned into a broader critique of the use of violence, which he believed served to maintain a social order that benefited only the wealthy and ruling classes. “Violence no longer rests on the belief in its utility,” he later wrote, “but only on the fact of its having existed so long, and being organized by the ruling classes who profit by it.” Tolstoy’s late views were considered especially dangerous in part because he was not merely calling for reform, but for the abolition of institutions upheld and guided by the use of force.

Richard Gustafson, the author of “Tolstoy: Resident and Stranger” (1986), wrote that for Tolstoy nonviolence meant “the rejection of coercion as the glue of the commonwealth.” Tolstoy asked that we embrace other forms of sociality instead, rooted in love, brotherhood and mutual aid. Perhaps the calls we hear now for defunding or abolishing police departments might also be heard in a similar way — as calls for love. Activists demanding divestment from police departments have urged that those same funds be redistributed to organizations and in support of policies that benefit the poor, the mentally ill and those who lack secure housing.