Protests spark battles across the US: Antifa and Proud Boys brawl in Michigan, cops clash with BLM marchers in Chicago and pro-police demonstrators fire gunshots in Portland as rallies turn violent 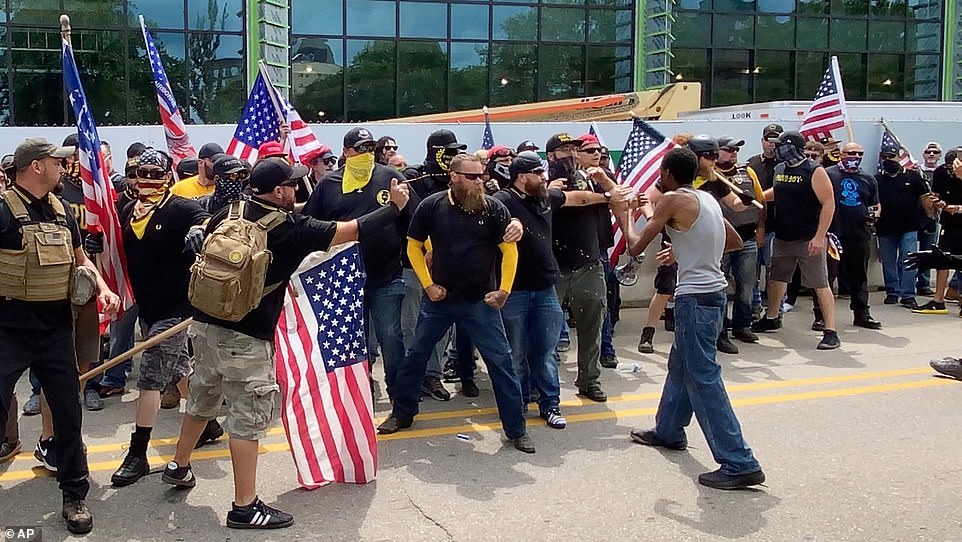 Brawls between Antifa and far-right Proud Boys broke out on the streets of a Michigan city on Saturday, as protests turned violent across the United States this weekend.

From Portland in the west to Miami in the east, via Michigan, Salt Lake City, Minneapolis and Chicago, Americans took to the streets on Saturday to demand change.

In Michigan, a rally by the far-right group Proud Boys turned violent in downtown Kalamazoo, with demonstrators clashing with anti-racism protesters at a vigil organized by the First Congregational Church.

‘The Proud Boys, they not only have hatred for Jewish people and Muslim people, but they’re also very hateful of anybody who doesn’t look like them or act like them,’ said The Rev. Nathan Dannison, the church’s pastor.

Addressing the gathered crowd, Dannison urged those present to commit themselves to non-violence and non-aggression, MLive reported.

In Kalamazoo, Michigan, anti-racism protesters attending a church-organized rally fought with Proud Boys in the streets

Members of the far-right Proud Boys group clash with anti-racism protesters in Kalamazoo, Michigan, on Saturday

Police did not arrive to separate the rival warring factions until almost 2pm, by which time downtown Kalamazoo was chaotic

Violence broke out soon after, with Proud Boys attacking counter-protesters with fists, kicks, and shoves.

Police arrived around 2pm to try and separate the rival protests.

In Chicago, police used pepper spray and batons to repel hundreds of demonstrators, who took to the streets calling for the defunding of police.

One protester was seen apparently bashing an officer over the head with a skateboard.

Officers then ripped umbrellas and bikes from protesters’ hands and sprayed the crowd with a chemical irritant, the Chicago Sun-Times reported.

The demonstrations began at Chicago’s iconic Bean before the group traveled to Michigan Avenue and Wacker Drive.

Multiple arrests were witnessed at the scene, NBC 5 said.

The group then continued to Michigan Avenue and Randolph Street, heading toward Chicago’s Loop as city bridges remained lifted, preventing them from crossing the Chicago River.

A heavy police presence was seen in the area with several officers both in front and behind the marching demonstrators and other lines of officers blocking streets.

The group chanted things like ‘no justice, no peace’ as they called for defunding the police, removing police from the city’s public schools, and abolishing Immigrations and Customs Enforcement (ICE).

Large numbers of Chicago police officers, many on bicycles, swarmed the center of the city to kettle protesters

Chicago police prevent demonstrators from marching towards the freeway, raising their batons to keep the crowd at bay

Activists calling for an end to police presence in Chicago’s schools, among other things, confronted officers on Saturday

About 200 anti-police brutality protesters marched in the neighborhood of Bronzeville, in Chicago, on Saturday

Drawbridges to the downtown of Chicago were raised, to prevent protesters from entering the central areas

Saturday began with a noon counter-protest, as around 30 right-wing demonstrators gathered in front of the Justice Center to support police.

A seemingly equal number of protesters arrived there to oppose them, Oregon Live reported, and skirmishes broke out between the opposing demonstrations.

The pro-police protesters maced and fired some kind of pellet guns toward counter-protesters, the site reported.

A man holds aloft a sign in Portland, Oregon, on Saturday during the 80th day of demonstrations in the city

Members of the Proud Boys, an alt-right, pro-Trump group, face off with activists in Portland, Oregon on Saturday

With his Proud Boy tattoo proudly on display, an alt-right counter-protester aims his paint ball gun at anti-racism protesters

One of their number then fired a gun twice from a car as they left a parking garage counter-protesters chased them into, the site said.

A witness on the KOIN live stream said a protester had thrown a bottle at the car carrying right-wing protesters before the shots were fired.

In Georgia, supporters of the Confederate flag argued and tussled with Black Lives Matter activists at Stone Mountain, just outside Atlanta.

Inside the park is a huge rock featuring the Confederate Memorial Carving, which depicts Civil War generals Stonewall Jackson and Robert E. Lee, plus Jefferson Davis.

The park was closed on Saturday after several far-right groups, including militias and white supremacists, announced plans to rally, and a broad coalition of leftist anti-racist groups organized a counter-demonstration.

The militia-backed protesters were met by hundreds of counter demonstrators eager to shout them down. That group included mainline civil rights organizations like the NAACP but also far-left anarchists and socialists, some of whom arrived with assault weapons and were as heavily armed as the militia.

Saturday’s demonstration drew a large police presence from around the metro area and the Georgia State Patrol, but they stayed on the periphery of the protests, and there were no arrests.

In Minneapolis, crowds gathered to remember George Floyd at the spot where he was killed, on May 25.

The four white police officers involved in the death of the black man are due to go on trial next year.

A vigil was held commemorating the life of Floyd and calling for the pressure to be maintained, for police to reform

On the other side of the country, in Miami, a protest was held to demand justice for a man who died in ICE custody.

Kuan Hui Lee, 51, from Taiwan, had been held by ICE since January and died on August 5 at Kendall Regional Medical Center, where he had been in critical condition with a diagnosis of a massive intercranial hemorrhage.

Activists held a vigil for Lee, demanding the abolition of ICE and waving placards reading: ‘Detention is Death’.

And in Virginia, heavily-armed Black Lives Matter supporters, who also proclaim their defense of the Second Amendment, marched through Richmond.

A Black Lives Matter affiliate, which calls for the defense of the Second Amendment, protests on the streets of Richmond, VA

Demonstrators pose for photo during an open carry rally in Richmond, Virginia on Saturday afternoon

Demonstrators in Richmond, Virginia promote the defense of the Second Amendment