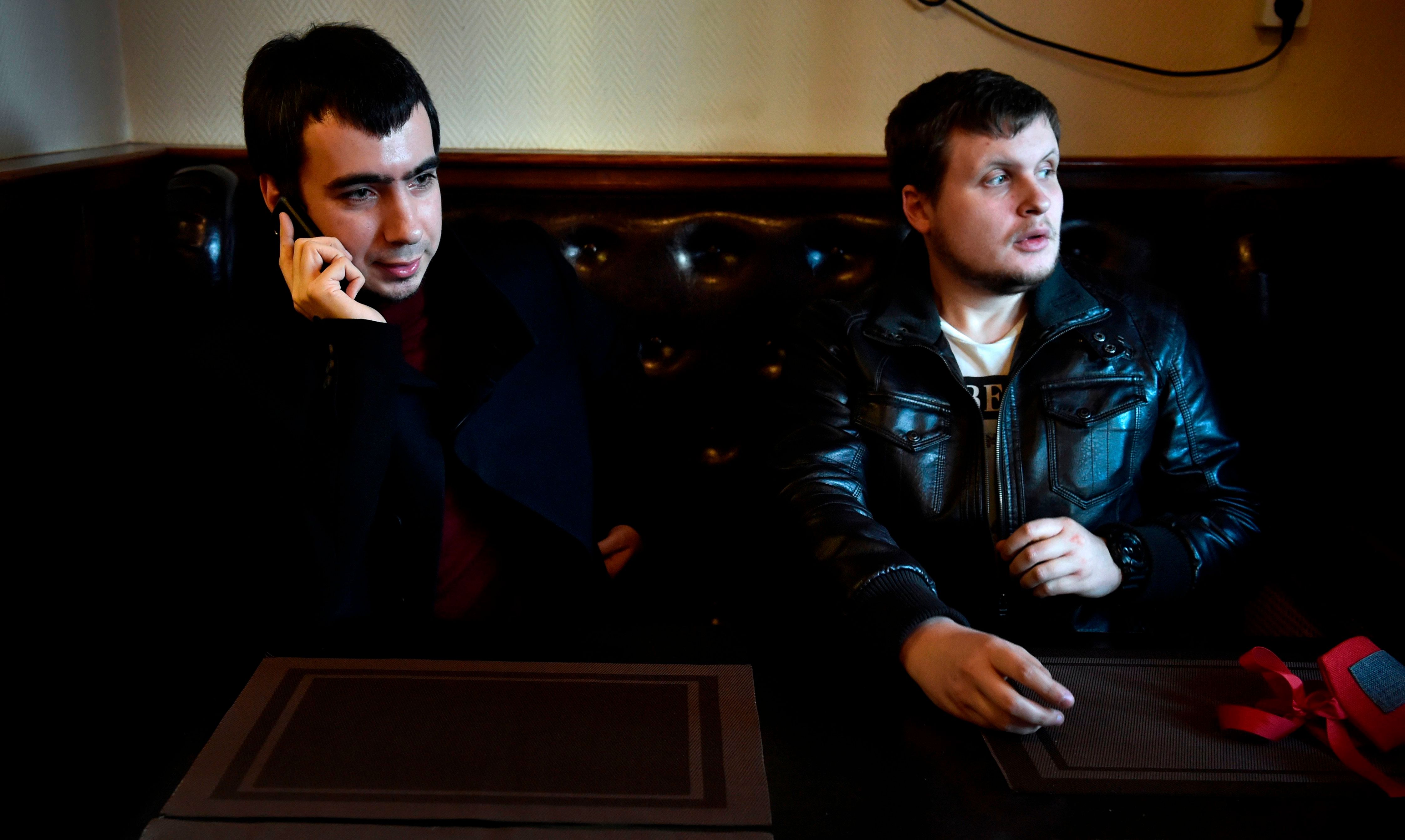 RUSSIAN pranksters duped Kamala Harris by posing as Greta Thunberg in a phone call as they discussed climate change and Donald Trump.

The US Sun can reveal infamous duo of Vovan and Lexus got a chat with Joe Biden’s VP as they posed as Greta offering dirt on Trump.

Exclusive audio of the three minute chat has California senator Kamala enthusiastically greeting who she thought was teenage climate activist Greta over the phone around January.

“Greta” claims she has “nightmares” about meeting Trump at the UN last September as they talk over Kamala’s climate plan and her campaign.

The pranksters then say that they have a secret recording of Trump whispering “you will never achieve the goal” to Greta.

“Greta” and a prankster posing as her dad Svante then offer to provide the audio to help the campaign.

Kamala replies: “Thank you, that would be wonderful”.

It is illegal to record people’s conversations without both parties’ consent in 15 states – but not in New York where “Greta” claims she recorded Trump.

Security experts branded the prank a “wake-up call” and said Kamala’s team failed to carry out simple checks to verify who was on the other end of the phone.

The audio has been revealed days after Harris was named Biden’s choice for VP as battlelines are drawn for the 2020 presidential election.

It also comes as Biden and Harris were officially crowned as the Democrat’s White House challengers at showstopping party convention.

Harris officially accepted the Democratic vice-presidential nomination on Wednesday on a night when Barack Obama launched a blistering attack on his successor, Trump.

The prank call – which happened after Harris dropped out of the Democratic race in December – begins as Kamala says: “Hello Greta, congratulations on all of your leadership, I am so inspired by your courage and your voice.”

‘Greta’ then asks if there is anyway she can support Kamala’s campaign, saying it would be “cool”.

Speaking at the US Senate in Washington DC, the Democrat says she would like ‘Greta’ to talk about her climate plan and encourages her to follow up with her policy team – with any support being “very helpful”.

‘Greta’ claims she has tried to speak to other politicians but not had any luck, and she laments being slammed by Russian leader Vladimir Putin was “not what I wanted”.

Kamala replies: “There are forces working against our movement and we have to fight for these things.

“This is that moment, and you have been great warrior in this cause.”

The pranksters then claims ‘Greta’ cannot eat or sleep when she sees Trump – saying she is “terrified” of what he is doing, and saying the meeting at the UN was “terrible”.

‘Greta’ says she shouted at Trump in a corridor urging him sign the Paris climate agreement.

She adds that the President came over and “softly” whispered “you will never achieve the goal” in her ear.

The pranksters try to keep up the fake anecdote as ‘Greta’ says “he continued, he continued”.

But they are cut off by Kamala who offers words of encouragement for her cause.

Here is the full transcript of “Greta

STAFFER: Svante, I have you here with Senator Kamala Harris

KAMALA: Hello Greta, congratulations on all of your leadership. I am so inspired by your courage and your voice.

“GRETA“: Umm, it would be cool to support you in your campaign. What is the best way to do it?

KAMALA: The best way to do it would be to talk about my climate plan. You know what I can do is, I can ask my policy team to follow up with you with more detail on what exactly would be helpful and what is something you would like to do. Then we can talk in more detail about how that can work and that would be very helpful, and I thank you for that.

“GRETA”: We wrote to many politicians, but not many people respond. How sad it is.

“SVANTE“: Recently, even President Putin said about you…

KAMALA: Well it just highlights the need that we have to be active. There are forces working against our movement and we have to fight for these things. This is that moment, and you have been a great warrior in this cause.

“GRETA“: I am so terrified of what Trump is doing, I even cannot eat or sleep when I see him on TV. That terrible meeting in the UN building in September, I have nightmares. I saw him in the corridor and shouted to him to sign the Paris climate agreement. He came over and he said softly to me ‘you will never achieve the goal’.

KAMALA: No, but Greta…

KAMALA: …do not be discouraged, you have the ability to see what is possible in a way that many do not and there will be people who are going to work against progress. That is always the case, always in history there have been people who work against progress. Listen, nothing that has been achieved in this world that has been about progress came without a fight. This is the nature of it.

“GRETA”: But it is very sick to behave like that – I mean President Trump

KAMALA: Yes, it is similar to previous times in history when some people could not imagine how things can be different and then leaders did imagine and could see and lead. You have been a great leader, do not be deterred.

“SVANTE”: Greta has a recorder always with her, and when it happened…

GRETA: In my pocket, yes.

“SVANTE”: ….it was on Greta’s recorder. If you would like to get it, we can provide it.

“GRETA“: Maybe this recording can help you.

KAMALA: Thank you, that would be wonderful.

“GRETA”: In my side, I can testify against this terrible man.

KAMALA: Yes definitely, thank you so much.

“SVANTE”: Thank you so much.

KAMALA: I am sorry I have to hang up now, but Josh will follow up with you and we will stay in touch and work together. I look forward to working with you.

“SVANTE”: We are in Canada now, but we will be in the US soon.

KAMALA: Oh good, we should make a plan then. I would like that.

“SVANTE”: I hope that you will not arrest us…

KAMALA: I look forward to seeing you, be well, and I’ll talk to you soon. Bye, bye.

‘Greta’ describes Trump’s actions as “sick” – and then Svante offers up the recording to help “against this terrible man”.

Kamala seems interested in getting a copy of the audio – but then she goes to end the call, saying “I look forward to working with you”.

‘Greta’ and ‘Svante’ then say they will be in the US soon and offer to meet up with Kamala, saying “I hope you won’t arrest us”.

She can be heard saying “I don’t want to go to jail” in the background as Kamala says “no, no, no”.

Kamala finishes the call saying “I look forward to seeing you, be well, and I’ll talk to you soon, bye bye”.

Pranking all over the world

KAMALA Harris’s hoaxers have been hoodwinking the great and good with bogus calls for years and count Bernie Sanders and Prince Harry among their many victims.

In January, they convinced Sanders, Harry and Hollywood star Joaquin Phoenix they were chatting to Swedish eco-activist Greta Thunberg.

They promised Sanders she could arrange for Kanye West and Billie Eilish to perform a “cool rap” for his Democrat campaign.

Delighted Sanders replied: “They would be willing to do something on the internet?”

Phoenix spoke to “Greta” along with his fiancee Rooney Mara, with the pranksters managing to convince him to laugh like the Joker.

In 2015, they had Elton believing he was chatting to Vladimir Putin about laws on gay rights in Russia.

The singer, believing he was talking through an interpreter, said it was “a great privilege to . . . speak to one of the most influential people in the whole world”.

President Putin did call Elton to clear up the gaffe.

The pranksters deny claims they are “Putin Puppets” who target Western celebrities and politicians to make them look stupid.

She warned Kamala could have been duped into giving over sensitive information that could potentially put her in danger – describing the chat as a “wake-up call”.

Ms Payton said: “Often people just assume when they are on the phone it is more secure than on the internet.

“Extra care needs to be taken by the handlers to find out who is calling. A few simple questions and they could have turned it over to someone on the security team to do a quick check.

“A couple of quick checks would have taken a few minutes.”

Will Geddes, a former bodyguard who now runs his own firm International Corporate Protection Group, also told The US Sun it is a “wake up call” for Kamala’s security team.

“It is a pretty elaborate scam but it does highlight she doesn’t have good protocols in place.

“Obviously, a senator wouldn’t have the same security as in the White House, but it is concerning if her staff are not following protocols to find out who it is on the phone.”

He added: “It’s a stark reminder there are those out there who have more malicious than humorous intentions.”

Vovan and Lexus have carried out a string of high profile pranks and posted the chats on their YouTube channel vovan222prank – which has 100,000 subscribers.

The Greta character was used earlier this year to trick Bernie Sanders and Prince Harry.

They promised Sanders she could arrange for Kanye West and Billie Eilish to perform a “cool rap” for his Democrat campaign.

Harry meanwhile accused Trump of having “blood on his hands” in his chat with “Greta”.

He also opened up over his separation from the British Royal Family with his wife Meghan Markle, saying its a “this decision certainly wasn’t the easy one”.

‘Greta’ also spoke to Joker star Joaquin Phoenix and his partner Rooney Mara, before the couple twigged it was a prank.

They also managed to use the persona to chat to Billie Eilish.

And back in 2015, the pranksters convinced singer Elton John he was chatting to Vladimir Putin about laws on gay rights in Russia.

The singer, believing he was talking through an interpreter, said it was “a great privilege to . . . speak to one of the most influential people in the whole world”.

In another audio clip, the pair tricked US congresswoman Maxine Waters into believing she was helping to support people in need on the fictional island of Chunga-Changa.

Vovan and Lexus have previously been accused of being stooges with links to Russia’s security services and the Kremlin.

However, they deny working for Putin’s regime – saying in 2016 ““we work for ourselves, for nobody else”.

Stolyarov told The Guardian: “People are always offering us to get involved in their dirty games. I was offered $100,000 to secretly prank an MP. But we refuse.”

Kuznetsov added: “We only choose the subjects we are interested in ourselves.”

The US Sun has contacted the Biden-Harris campaign for comment on the prank.https://imasdk.googleapis.com/js/core/bridge3.402.1_en.html#goog_597838338 Prince Harry claims Donald Trump has ‘blood on his hands’ in call from hoaxers posing as activist Greta Thunberg

We pay for your stories!

Do you have a story for The US Sun team?