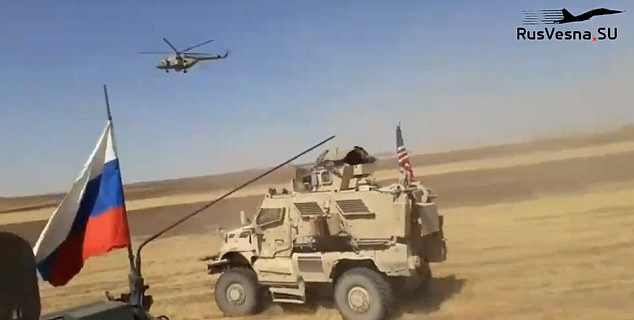 Four U.S. troops were injured after a Russian military vehicle deliberately rammed the vehicle they were driving following a tense high-speed confrontation in the east of Syria.

Video tweeted of the incident bearing Russian markings shows the drama that resulted in the apparent ramming. The precise location of the skirmish was unclear.

In it, a Russian helicopter can be seen overhead while military vehicles bearing U.S. and Russian flags circle.

A military scholar who reposted the video said U.S. forces appear to be blocking the path of a Russian patrol in an open field. https://www.dailymail.co.uk/news/article-8667009/Four-American-troops-wounded-Russian-forces-RAMMED-vehicle-Northern-Syria.html#v-812450659144086634

High-speed confrontation: This is the moment before the Russian vehicle from which the video footage came hits the U.S. armored vehicle as the two patrols move fast across a field in the east of Syria with a Russian military helicopter flying low overhead

Russian presence: One still from the video shows how the Russian armored vehicle which rammed the American troop-carrier was not alone – at the right is another armored Russian vehicle

A U.S. and Russian vehicle then collide.

The U.S. has several hundred troops in Syria, following a pullout President Trump announced. They are mostly in the east of the country.

The U.S. has supported Syrian Democratic Force in the conflict, while Russia has backed the government of President Bashar al-Assad.

The clash on the ground comes after U.S. and Russian diplomats have taken steps to avoid accidental military engagements between the two nuclear powers.

The two sides negotiated in 2015 under the Obama administration over rules for the skies as both sides exercised air power in the civil war.

The two sides have continued to maintain communication in an effort to avoid confrontations between the two superpowers.

Other videos appear to show a Russian helicopter hovering over U.S. forces in an attempt to make them disperse.

The U.S. vehicle in the encounter appears to be an MRAP, Mine-Resistant Ambush Protected, which is designed to provide protection against roadside bombs.

President Trump announced a pullout from northern Syria in 2019, but faced blowback from critics who said he was ceding the ground to Assad and yielding to Russian influence in the region.

High stakes: The revelation that Russian forces rammed an American patrol vehicle and left four troops injured comes after warnings Vladimir Putin was paying bounties to the Taliban for killing U.S. troops in Afghanistan, which Donald Trump said he was never briefed on

The video, which allegedly occurred on Monday according to footage, emerged on the third day of the Republican National Convention.

It comes weeks after Trump faced political blowback after reports that the U.S. received intelligence that Russia was paying bounties to forces in Afghanistan for killing U.S. troops.

The White House said Trump was never briefed verbally on specific intelligence because it was not fully vetted, although the New York Times reported it was included in his daily intelligence brief.

Trump said late last month that he has never raised the issue of Russian bounties with Russian President Vladimir Putin.

Secretary of State Mike Pompeo has warned his Russian counterpart against paying bounties for killing U.S. troops, the Times reported August 7 in what appears to be the first U.S. rebuke since the information emerged.

The U.S. military has repeatedly complained to Moscow about harassment from Russian military forces in the air, land, and sea.

In April, Russian jets buzzed U.S. and NATO aircraft in the Baltic and over the Mediterranean.

‘For the second time in four Days, Russian pilots flew in an unsafe and unprofessional manner while intercepting a #USNavy P-8A Maritime Patrol and Reconnaissance Aircraft in @USNavyEurope,’ the Navy tweeted at the time.

Russia responded that it had raised an aircraft from a Syrian base in compliance with rules over international waters.

In late 2019, NATO complained about Russia’s repeated buzzing and harassing of U.S. ships.