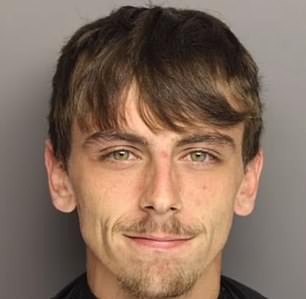 Sheriff’s deputies have released bodycam footage of the moment they fatally shot an armed man in the back while he tried to escape them in South Carolina.

Michael Culbertson, a 26-year-old white man wanted for reckless driving and resisting arrest, died in the shooting by Greenville County deputies on July 11.

The footage shows Culbertson reaching for a firearm before he is shot in a hail of bullets with five of the seven deputies firing at him as he tried to run away.

Culbertson fell to the ground and his own ammunition supply was discovered on the road before he was taken to hospital and pronounced dead, authorities said.

The deputies involved in the shooting have been cleared of violating Greenville County policy, Sheriff Hobart Lewis said.

However, a state criminal investigation into whether shooting Culbertson was justified is still ongoing.

The sheriff’s office released the edited body camera footage with commentary from its own deputies on Tuesday.

Captain Michael Brown said the shooting unfolded at around 5pm on July 11 after deputies tracked down Culbertson in their unmarked vehicle.

Culbertson had ‘multiple active warrants for his arrest’ for reckless driving, resisting arrest, failure to stop for blue lights and interfering with police, Brown said, and his death ended two days of searching for him.

The footage starts with the deputies jumping from the back of their van to confront Culbertson, with one officer yelling: ‘Let me see your f***ing hands’.

Within three seconds, Culbertson was reaching for his pocket to retrieve a weapon with his right hand – prompting one of the officers to open fire.

After failing to arrest Culbertson the previous day, sheriff’s deputies tracked him down in an unmarked van before jumping out to confront him

Officers said Culbertson was reaching for a firearm in his right pocket, prompting five of the seven deputies to open fire at him

There was a brief pause after the first shot as Culbertson keeps running and appears to try to shift the gun in his right hand, while holding a cell phone in his left.

Then a barrage of shots from deputies is heard and seen as Culbertson falls to the street about 10 seconds after the first officer jumped from the van.

The footage then shows a 9mm handgun and a magazine containing ‘multiple rounds of ammunition’ lying on the ground near Culberton’s body as deputies run up and begin first aid.

Deputies carried out CPR until emergency services arrived on the scene and took Culbertson to a hospital, where he was pronounced dead.

Michael Culbertson (pictured) was wanted for reckless driving, interfering with police, failing to stop for blue lights and resisting arrest

The State Law Enforcement Division investigation into the shooting continues.

The names of the deputies have not been released. Two were in uniform and five others were part of a special team to arrest fugitives, authorities said.

Deputies tried to arrest Culbertson the day before the shooting, but he evaded arrest, the sheriff’s office said.

Investigators then spoke to his family, and Culbertson’s grandfather, who lives a few houses away from where he was killed and took a call from his grandson as a deputy stood near enough to hear the conversation.

Culberton refused to say where he was, but told his grandfather ‘I’m not going to jail. They’ll have to kill me,’ Carey Reese said.

Reese told The Greenville News he thinks that comment led deputies to decide to shoot at his grandson instead of trying something else.

‘Michael had a mouth,’ Reese said.

Culbertson called his grandfather three more times, but Reese did not answer.

‘I could just kick myself. I didn’t talk to him. That would have been the last chance I could have talked to him,’ Reese said.

Five of the seven officers opened fire at Culbertson, but an investigation by the sheriff’s office has been cleared of violating Greenville County policy

Incidents such as this have been under severe scrutiny in recent months following the death of George Floyd in Minneapolis and resulting wave of protests against police brutality.

The most recent wave of anger has surrounded the shooting of Jacob Blake, a black man who is in hospital after being shot seven times at point-blank range by police.

The Wisconsin Department of Justice yesterday gave its first official account of Blake’s shooting, saying he had a knife ‘in his possession’ when he was shot.

But anger over the shooting has led to nightly protests in Kenosha, which ended in further gunfire on Tuesday night that left two people dead.

Democratic rival Joe Biden meanwhile said he has spoken to Blake’s family, and promised them ‘justice.’

‘What I saw on that video makes me sick,’ Biden said of the shooting footage. ‘I told them justice must and will be done.’