John A. Macdonald statue: Put it back, move it or drop it in the river? 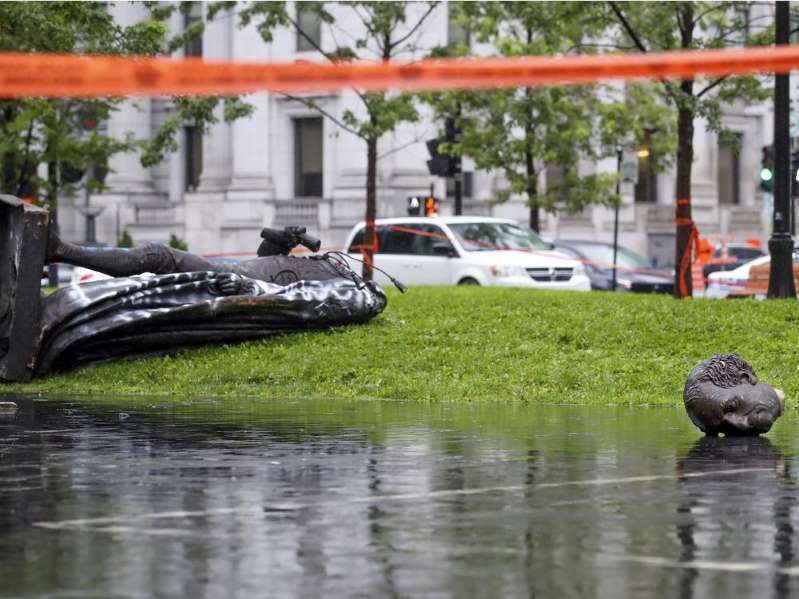 © John Mahoney The statue of Sir John A. Macdonald lies in two pieces at the base of the monument from which it was pulled during demonstration by the Coalition for BIPOC Liberation in Montreal on Saturday, Aug. 29, 2020.

Should Sir John A. be put back on his pedestal?

The long-simmering controversy over the legacy of Canada’s first prime minister boiled over Saturday, when protesters toppled the 125-year-old statue of Macdonald in downtown Montreal .

“Such gestures cannot be accepted nor tolerated,” she tweeted.

“Whatever one might think of John A. Macdonald,” said Premier François Legault, such acts have “no place in our democracy and the statue must be restored.”

Alberta Premier Jason Kenney offered on Twitter to take the statue if Montreal doesn’t want it.

Plante said the city will coordinate the statue’s restoration and consult heritage experts over the next steps to be taken.

The question now is what those steps will be.

Will the statue be restored to its perch in Place du Canada, where it has been repeatedly doused with paint, damaged and even suffered decapitation in 1992?

© GORDON BECK The John A. Macdonald statue after nationalist sympathizers removed its head in 1992.

Will it be moved to another site?

Or will Macdonald’s effigy be permanently removed from public view, to emphasize that the racist views of Canada’s first Father of Confederation are unacceptable in today’s Canada?

“Drop it in the middle of the St. Lawrence River,” suggested Daniel Paul, a Miꞌkmaq elder, author and human rights activist in Halifax.

Paul, the author of We Were Not the Savages, a 1993 history of the Mi’kmaq people under British colonialism, was instrumental in the removal of the statue of British general Edward Cornwallis from Cornwallis Park in Halifax and the renaming of that park.

But historian Jack Granatstein said the statue should be restored to the site where it has stood since 1895.

“He’s the founder of Canada. He’s the man who created this country, which for all its faults, and there are many, is still the best place in the world to live,” said Granatstein, a Distinguished Research Professor of History Emeritus at York University.

A plaque could be added explaining the darker aspects of Macdonald’s legacy, he said.

Those include creating the residential school system to assimilate Indigenous Peoples, forcing them onto reserves by refusing food aid during a famine and barring people of Chinese origin from voting.

Macdonald’s “views were shared by 99 per cent of Canadians at the time. If you condemn Macdonald, you condemn everyone who lived then,” Granatstein said.

But many think otherwise. As of Sunday, 45,716 people had signed an online petition calling on Plante to remove the statue, charging that it glorifies a leader who pursued Indigenous genocide.

McGill University historian Allan Greer said the monument sends a message that “is distasteful and offensive, particularly to Indigenous Canadians, but to the rest of us as well.”

“I think in the current circumstances, it has to go,” he said.

It aggrandized Macdonald’s role while leaving out the stories of the less powerful, he said.

Monuments “are never apolitical,” he said.

But Dinu Bumbaru, policy director of Heritage Montreal, said by email there is no reason why the statue should not be returned to its site, calling the vandalism “very unfortunate” and “undemocratic.”

Montreal has a tradition of monuments that express diverse political views, he noted. For example, he pointed to the statue of Liberal Prime Minister Wilfrid Laurier in Dorchester Square, across René Lévesque Blvd. from that of Macdonald.

Rather than removing the statue or adding a plaque, Bumbaru suggested creating a contemporary monument near it that would express a different perspective.

In 2018, Victoria removed a statue of Macdonald as a gesture of reconciliation with First Nations. Monuments to the first PM have come under fire in other cities from Regina to Charlottetown.

© John Mahoney Protesters walk in the rain up Jeanne Mance St. during a demonstration by the Coalition for BIPOC Liberation in Montreal on Saturday Aug. 29, 2020.

Saturday’s protest, organized by the Coalition for BIPOC Liberation, which describes itself as a collective of social justice groups led by Black and Indigenous Peoples, started peacefully with about 200 marchers.

However, after arriving at Place du Canada, participants, hidden behind banners, climbed up the base of the statue and pulled it down. The statue’s head fell off when it hit the ground.

Several dozen police accompanied the marchers but did not intervene when the statue came down. No arrests were made.

Pat Hickey of the Montreal Gazette contributed to this report