‘It’s vile, but this is the new norm’: Woman is seen ‘performing sex act on a man while relieving herself’ in the street on the Upper West Side as the once upmarket neighborhood falls victim to increased crime and homelessness 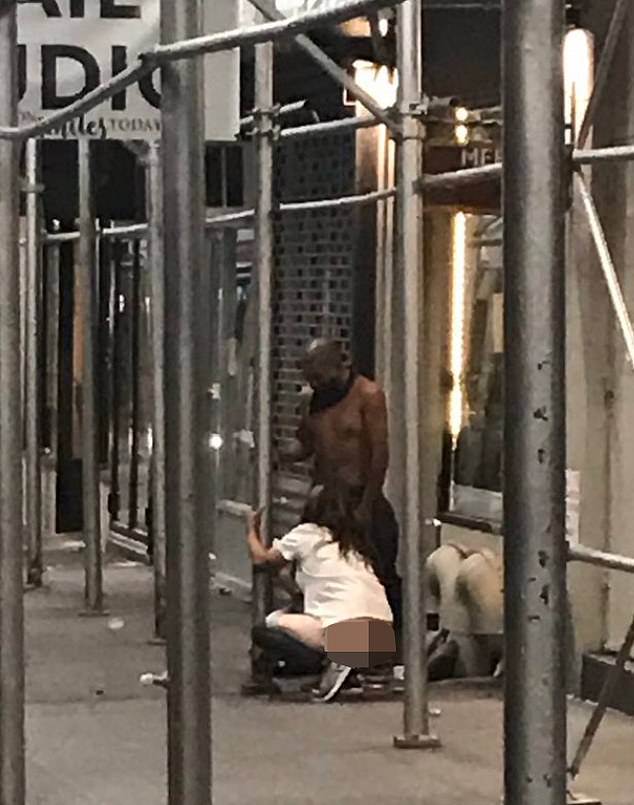 A shocking photo has emerged showing a woman performing a sex act in the street in the Upper West Side, in another alarming indication of how one of New York City‘s wealthiest neighborhoods is being overtaken by crime and homelessness.

In a disturbing picture shared on Twitter, the woman can be seen crouching down while apparently performing oral sex on a shirtless man near W 79th Street and Broadway around 9pm on Sunday.

She also appears to be undressed from the waist down, with her pants around her knees.

A witness who took the photo told DailyMail.com the woman had removed her pants to relieve herself on the sidewalk during the encounter.

A woman was seen performing oral sex on a man on the streets of the Upper West Side on Sunday evening.  A witness said she had pulled her pants down to relieve herself during the encounter

The photo was shared on Twitter by Save the Upper West Side, an online community group which has been calling on public officials to restore order to the streets

The neighborhood, home to some of Manhattan’s wealthiest residents, has recently been overtaken by crime, homelessness and public drug use. Pictured: W 78th and Broadway, where the incident reportedly took place

‘It was vile, but [this] has become the norm for that area,’ Upper West Side resident Mike G said.

‘It was Sunday night. Not much foot traffic. There were probably one or two others that walked by.

‘I don’t usually take pictures of others’ misfortunes, but this was a level of degeneracy I haven’t seen out in the open in the neighborhood yet,’ he added.

It comes as New York City – especially the Upper West Side – continues to grapple with a surge in crime and homelessness that has emerged during the pandemic.

The photo had been shared on Wednesday by ‘Save the Upper West Side’, an online group of more than 13,000 members that has been lobbying to restore order to the streets.

‘Is oral sex the compassion needed? Quality of life no longer exists on the UWS. Would you want children to see this on Bway btw 78-79 as you walk around?’ the group said in a tweet.

Upper West Side residents say three hotels that are housing hundreds of homeless people during the coronavirus pandemic have turned the area into a spectacle of public urination, cat-calling and open drug use

Residents say the area has been turned into a spectacle of public urination, cat-calling and brazen drug use

A representative of the group told DailyMail.com: ‘9pm on a summer evening on the UWS – hardly imaginable a few months ago.

‘Usually children [are] enjoying an ice cream cone after an evening at the playground. Now open prostitution. The change in the neighborhood since the use of hotels as shelters in undeniable,’ the person added.

Homelessness in New York City has been escalating since March and has been made worse by residents fleeing and the NYPD budget cuts, which dissolved its homeless outreach unit.