DOVER’S anti-migrant protest has seen ten arrested during clashes with cops when demonstrators blocked the A20. 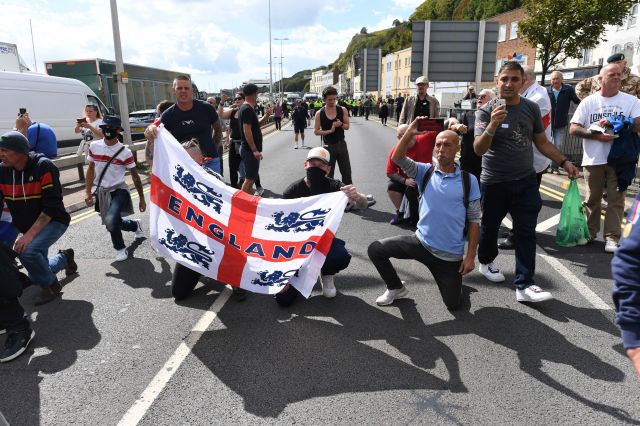 Around 100 demonstrators gathered at the harbour protesting the surge in migrants who have crossed the Channel from France in recent weeks.

Angry protesters tried to stop traffic on the A20 entering the Kent seaside town before a handful were hauled away by cops.

They were arrested on suspicion of offences including violent disorder, assaulting an emergency worker and a racially aggravated public order offence, police said after the crowds were dispersed.

Dover has become a flash-point for the refugee crisis in the UK as people seeking asylum make the perilous journey across one of the world’s busiest shipping lanes to forge new lives.

Many demonstrators wore Union Jack flag face masks and waved the England flag. Some shouted “England ’til I die” and sang Rule Britannia.

They were protesting against the arrival of thousands of migrants in small boats in recent weeks.

Chief Superintendent Nigel Brookes of Kent Police said it was “unacceptable” for anyone to use the march “as an excuse for criminal behaviour”.

He added: “Kent Police was clear that we would facilitate peaceful protest but would not tolerate violence or disorder.

“Our experienced officers sought to keep transport routes moving and balance the rights of those taking part in the protests with those living and working in Dover.

“We stated that it was unacceptable for anyone to use the event as an excuse for criminal behaviour and we were robust in taking action against those who did.

“Enquiries will continue to identify any further offences which took place during the protests.”

The total number of migrants who have crossed the sea to Britain in 2020 is now more than 5,600 with more than 400 people crossing the channel in just 30 boats.

Home Secretary Priti Patel has vowed to make the routes into British waters “unviable”, saying she wanted to stop the boats from even leaving France in the first place and returning anyone found attempting to make a crossing.

However, people are still trying to cross the Channel, despite the treacherous conditions.

Just last month a 28-year-old Sudanese refugee, Abdulfatah Hamdallah, drowned while trying to reach the UK in a toy dinghy.

Fears have also continued to grow that smuggling kingpins are making millions by preying on the desperate migrants, forcing them into overcrowded boats for the perilous journey.

Britain is now struggling to deport around 1,000 illegal migrants who crossed the channel.

In chaotic scenes today, police clashed with protesters with one person photographed being restrained on the ground by cops.

It is thought that the groups had travelled to Dover from across the country.

They held signs which read “welcome” and “we stand with you”.

Addressing a crowd of about 100, Peter Keenan from Kent Refugee Help said when society sees people who are fleeing war and turns them away “that says something about the state of your society”.

He continued: “We are not those people. We are standing up and welcoming people who are in desperate circumstances fleeing from awful situations.”

The scenes come despite pleas from local MP Natalie Elphicke to “stay away” to prevent a second wave of Covid-19.

They follow a projection of the words “Rise above fear. Refugees welcome” which were beamed onto the White Cliffs of Dover by humanitarian charity Freedom From Torture on Friday night.

Anti-racist group Hope Not Hate had raised concerns in advance of the event that violence would come – and that splintered parts of the British far-right may travel to Dover.

Chief Superintendent Nigel Brookes from Kent Police said: “As a force, it is our responsibility to facilitate peaceful protests, however we will not tolerate violence or disorder.

“Anyone planning to visit Dover with the intention of committing offences should be aware they are not welcome here and that we will seek to prosecute anyone who breaks the law.”

Prime Minister Boris Johnson recently reiterated his pledge to take advantage of Brexit to make it easier to deport migrants who have come here illegally.

Boris said he had “a great deal of sympathy” for parents so desperate that they are putting their children in dinghies and even paddling pools to cross the Channel.

But he said that they are falling prey to criminal gangs and vowed to change the law to help tackle the crisis.