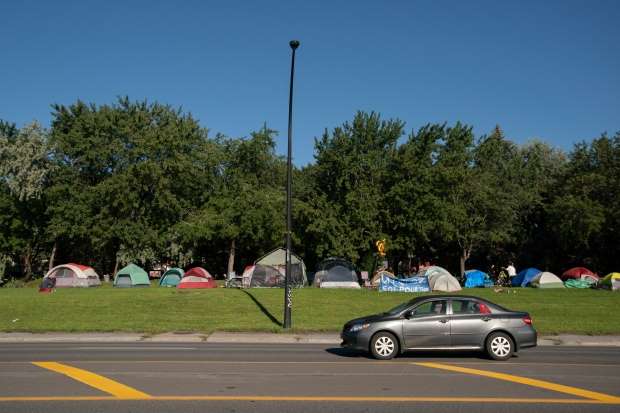 © Simon Nakonechny/CBC Jacques Brochu was one of the first residents of the encampment. ‘Here we’re a little gang,’ he said. ‘We know each other. We take care of each other.’

Jacques Brochu stands in the morning sun as a steady stream of cars and trucks barrel past along Notre-Dame Street.

The banner in his arms reads: “Merci de vos klaxon,” or thank you for honking.

Truckers, especially, were happy to oblige.

Brochu is among several dozen people, mostly men, still camped in tents on a sliver of green space east of downtown.

The city gave them until the beginning of September to vacate the encampment, and offered up space to stay in a nearby YMCA.

But Brochu is among those who are choosing to stay at the camp. He worries being confined to a shelter will make him more likely to get COVID-19.

“Here we’re a little gang. We know each other. We take care of each other,” said Brochu, one of the encampment’s first residents.

© Ivanoh Demers/Radio-Canada Tents began to appear on the stretch of province-owned land east of the Jacques Cartier Bridge in the spring as the pandemic worsened.

The homeless camp serves as a stark reminder of the tight housing market in Montreal, and the challenges of caring for the homeless during the pandemic.https://www.dianomi.com/smartads.epl?id=3533

Tents began to appear on the stretch of province-owned land east of the Jacques Cartier Bridge in the spring, as the pandemic worsened.

Housing advocates believe many of the people who found themselves there are homeless for the first time, victims of the economic downturn provoked by the pandemic.

Montreal recently announced it was opening three new homeless shelters for this winter, but the shortage of affordable housing remains largely unaddressed.

With thousands on a waiting list for a spot, Montreal Mayor Valerie Plante has called on Quebec and the federal government to finalize an agreement that would put more money toward addressing the problem.

In 2017, Ottawa promised Quebec $1.4 billion in funding for social housing. But the deal has yet to be finalized, due to a dispute for control over how the money is spent.

In an open letter to Prime Minister Justin Trudeau and Premier François Legault, Plante expressed frustration with both levels of government, demanding they come to terms on a deal.

© Simon Nakonechny/CBC Pierre Godbout is a volunteer who helps at the homeless camp.

Darby MacDonald, a community organizer with Project Genesis, a housing organization, said the political conflict is taking a toll on people’s lives.

“I mean, it’s hugely disappointing to see people suffer the way that they do in these unsafe housing situations and these unclean housing situations to not be able to eat, to have to struggle, to get by and to watch the government stagnate and sit on this money,” she said.

On Friday, NDP MP Alexandre Boulerice visited the camp and blasted the Trudeau Liberals for failing to act on the file.

“If it’s a question of conditions or no conditions and it’s a battle of flags between Ottawa and Quebec, I think it’s completely ludicrous,” he said.

In a statement released Thursday, a spokesperson for Ahmed Hussen, the federal minister of families, children and social development, said it’s still not clear when negotiations with the province will be completed, but that Ottawa “will continue to work with all levels of government.”

Quebec’s minister for social affairs and housing, Andrée Laforest issued a statement Friday saying the government was confident it would reach an agreement quickly.

“We’re working hard to ensure Ottawa respects Quebec’s competence in this matter and understands that Quebec has it’s own particular challenges and issues related to housing,” Laforest’s office said.

Brochu, who has emerged as the unofficial leader of the encampment, has no plans to leave. He collects cans for deposit to help pay for supplies at the camp.