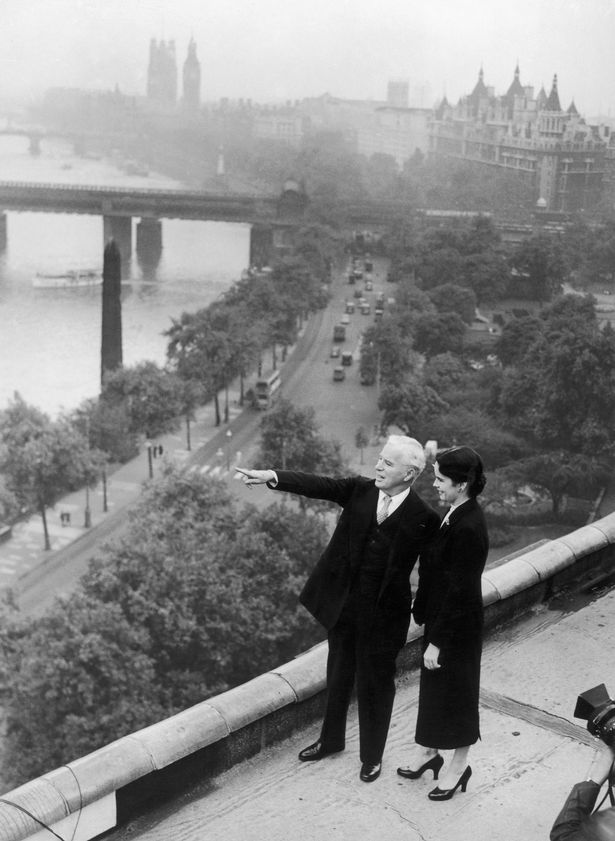 EXCLUSIVE: One of the most famous hotels in the world has been open for 130 years and has hosted some of the biggest celebrities and royal family members, from Alfred Hitchcock to Marilyn Monroe

Through two world wars and the great depression, the Savoy stayed resolutely open come rain or shine, and opulence remained the name of the game.

In its 130-year history the grand hotel on the Strand in Central London has only closed for a renovation a few years ago – and now for the lockdown.

It has maintained the same discreet charm since it was a favourite of Alfred Hitchcock, F Scott Fitzgerald, Frank Sinatra, Marlene Dietrich and Edward VII and his mistress Lillie Langtry.

Richard D’Oyly Carte opened what he called the “Hotel de Luxe of the World” with great pomp in 1889.

He understood what the newly minted Victorian wealthy wanted, because he was one of them. A Victorian Simon Cowell with cigars, spats and a top hat, he had made money as the business brains behind Gilbert and Sullivan.

The Savoy hotel and theatre went on to be run by D’Oyly Carte’s son and then his granddaughter until the 1980s.

In the 1920s stars flocked in as the hotel offered in-house jazz bands, cabarets and dinner-dances.

Some cards even recorded preferred porridge temperatures and mattress firmness and diagrams of how guests liked their toiletries laid out in the bathroom, which started with Noel Coward, who had a precise way of ordering things.

Actor Lionel Barrymore, who liked to smoke while reading in bed, was provided with a fire-retardant eiderdown after an incident with singed bedding.

When Louis Armstrong stayed, staff came up with strategically placed soundproofed padding to allow him to practise his trumpet in bed, and the set-up was drawn for future reference.

A Savoy pageboy was made available to take an all-expenses-paid trip to India at the behest of the Maharajah of Patalia, to deliver a small parcel. When the Maharajah took over a floor in 1930 with 50 attendants, the hotel installed a silver bathtub especially for him.

Staff rules included no running in front of guests and absolute silence when picking up and putting down crockery, glassware and cutlery. Specialist jobs included a waiter to spend hours in a fur coat in the -17C ice cavern, chipping away at the walls to supply the American Bar.

There was a maid to clear away the beads from the flapper dresses in between dances, and a pageboy to tactfully put out footstools for tired ladies to rest their feet.

Every morning the hotel had to be returned to perfection. A carpet spotter patrolled the halls, looking for loose threads and stains. One had the job for 33 years. A painter went around every day with a tray of 20 little pots and fine brushes, looking for nicks and scratches on the doors, chairs and skirting boards and making them vanish.

When the Queen and Prince Philip married in 1947, royals from around the world stayed including three kings, four queens and a “crush of princes, princesses and grand dukes”.

After the war Agatha Christie, then in her 60s, held court at the restaurant on her trips to London from her home in Devon, and threw parties there for the opening nights of her plays in the West End. In 1958, she invited 1,000 guests to celebrate The Mousetrap becoming the longest-running play in British history, after a 10-year run. It is still running now.

Dame Agatha wielded a big knife to cut the cake that weighed half a ton and ran the length of a small dining table, embedded with roses and ferns along the sides, with sugar mice and a huge icing mousetrap on top.

Outlandish cakes were a speciality. For the 1963 premiere of Cleopatra starring Elizabeth Taylor and Richard Burton, the towering pyramid confection was so spectacular it merited description in the Encyclopaedia Britannica. Taylor’s first stay had been in 1950, aged 18, for the honeymoon of her eight-month marriage to her first husband Conrad Hilton Junior. Richard Burton would later account for both her fifth and sixth marriages.

Charlie Chaplin, who stayed each year from 1952 until he died in 1977, moved in for three months when he felt unwelcome in America, his adoptive home.

As the Un-American Activities Committee searched for communists working in Hollywood, Chaplin would have been questioned had he returned. So he, wife Oona and their four children lived at the Savoy while they arranged to move to Switzerland. As female guests were not allowed into the bar, Oona was often seen waiting for Charlie outside while he had a few martinis before dinner.

In the 60s the hotel drew a mix of stars. The Beatles, Rolling Stones and Bob Dylan stayed alongside Hollywood royalty Katherine Hepburn, Marlon Brando, Cary Grant and Jane Fonda. Audrey Hepburn was in town for the premiere of My Fair Lady, and Ronald Reagan – then a fledgling actor a long way from the White House – stayed for film festivals.

Judy Garland, who had first visited as a child star, returned with her own young family, including daughter Liza Minelli. The most fashionable figures of the day checked in, apparently unworried that tour- nedos rossini and duck à l’orange were still on the menu, and that the Thames Foyer was decorated with old-fashioned wingback chairs and walnut side tables.

The hotel’s theatrical connections meant it hosted opening-night parties and awards ceremonies, which by the 60s had taken over from the debutante balls that once occupied the ballroom. The Savoy hosted the first Baftas which, unlike today’s marathon ceremonies, conferred only seven awards and kept it snappy, leaving the dinner as the main event.

In the 50s, the hotel’s pictures show Ava Gardner and Ingrid Bergman looking demure in calf-length, long-sleeved dresses, and Margot Fonteyn in her pearls and ballerina bun.

A decade on, in 1965, Sophia Loren cut an altogether different figure as she posed smoking and drinking in a sheer mesh top when she was in town to promote A Countess From Hong Kong, her film with Charlie Chaplin.

In 1969, Bond girl Ursula Andress sent photographers wild as she arrived in a sequinned mini dress. And when Marilyn Monroe promoted The Prince and the Showgirl, she was snapped wearing a dress with a transparent midriff, extremely risque for the time.