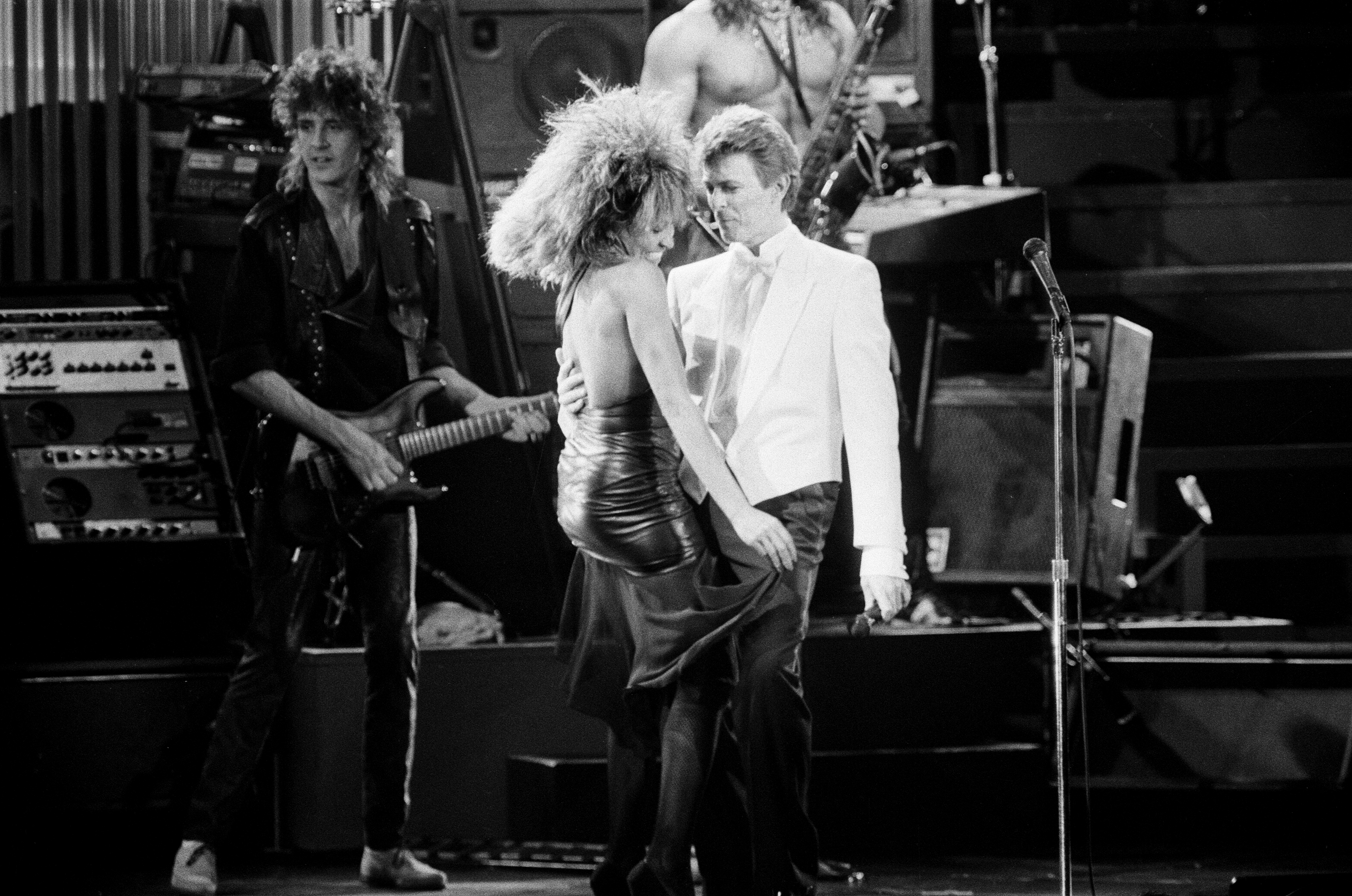 David Bowie told Tina Turner ‘I want you’ then came in naked in one of her wigs, pal reveals

AFTER four years chasing Tina Turner, David Bowie finally seduced her by ­singing her one of her songs in a hotel room – wearing nothing but one of her famous wigs.

In a new interview, her confidant and personal assistant for two decades, Eddy Hampton Armani, has revealed the singer’s secret admirers — who read like a Who’s Who of rock ­royalty.

But it was her song Proud Mary that Bowie sang for her.

Eddy, 62, said: “It was in 1985 and they were performing at ­Birmingham’s NEC on the UK leg of her Private Dancer tour.

“She told me David had already told her many times, ‘I want you’.

“I was asked to collect sushi from David’s favourite Mayfair restaurant in London and bring it up to ­Birmingham for them.

“I arrived to see their sound-check on stage and they were teasing each other. Later they went back to the hotel and had the sushi.

“The next morning I went to Tina’s room and she was acting really strangely. She said, ‘Oh my god, David is so naughty’.

“Then Tina started laughing and said, ‘He went to have a shower, then he walks out, stark naked, wearing one of my spare wigs.

“He started singing Rolling On The River and was dancing just like me’.

“They had fun. It wasn’t love, it wasn’t an affair, it was just a moment of explosive chemistry. It definitely brought a whole new meaning to ‘Private Dancer’ [Tina’s 1984 hit ].

“That night I went with Tina to the NEC for the performance. David appeared at the top of a long flight of stairs on the stage.

“Tina turned round with the biggest smile that said, ‘I had an exciting night’. The atmosphere between them was electric.

“On stage he whispered something to her and Tina burst out laughing.

The singer, known as the Queen of Rock ’n’ Roll, rose to fame as a duo with her husband Ike. After she walked out on the abusive marriage in 1976 she was left penniless.

Eddy said: “She was chased by ­bailiffs for fees for concerts that didn’t happen.

‘I WOULD BE TINA’S DECOY’

“Bailiffs would even try to serve her on stage. She struggled to get a recording contract as a solo artist.

“We would have to sneak her out of gigs and would have two cars, one at the front and back, and I would often be her decoy in a big scarf to make myself look like her.”

But at the age of 45 she made a comeback with 1984’s multi-platinum album Private Dancer and went on to have hits including We Don’t Need Another Hero, The Best and James Bond theme song GoldenEye.

In a career spanning more than half a century, Tina has sold more than 200 million records and is worth an estimated £200million.

Last month she came out of retirement for the Kygo collaboration, scoring another seven No1s worldwide.

And the man who witnessed it all was Eddy. He was just 14 when he set up her first official fan club and over the next two decades he became her confidant and friend.

He said: “She is the ultimate ­survivor. With a combination of ­determination, grit, talent and sexual charisma, she became a legend.” She also became a magnet for the male rock and roll stars of the time.

But Eddy said: “She was the Queen of Rock but she never slept around.

“She was great friends with the Rolling Stones though. Keith Richards would blush like a schoolboy whenever she was around.

“She told me she wasn’t attracted to him. He was too wild for her and she didn’t like their drugs and excess.

“One day Mick Jagger came to see her when they were all performing in New Jersey and said, ‘Tina, can you do us a favour? Can you ask Keith to do something with his teeth?’

“Mick knew Keith would take the criticism from her but she said, ‘No, I’m not getting involved’, in a jokey way. She didn’t want to go there.”

Tina recorded the 1986 song Tearing Us Apart with Eric Clapton, who also flirted. Eddy said: “She thought he was too wild for her and said, ‘He’s flirting but I am not going there’.”

But he revealed it was a different story with Dire Straits frontman Mark Knopfler, who wrote Private Dancer.

Eddy said: “Tina had a major crush on him. She fancied him like mad, but he was married.

“She knew what it was like to be on the receiving end of another woman because of Ike’s many affairs.

“She could never do that to someone else. He was definitely off limits. Nothing happened.”

Tina also fancied Blade Runner actor Rutger Hauer. When she recorded her album Break Every Rule in 1986 she requested he appear in her video for the song Typical Male.

Eddy said: “He was the Dutch blue-eyed heart-throb of the moment. She said she wanted him in the palm of her hands.

“But her world came crashing down when he didn’t respond to her request.

‘HER DRESS STARTED TO FALL’

“She tried to brush it off, saying, ‘He doesn’t know what he’s lost’. But she was sensitive.

“While she was an international sex symbol wearing risqué outfits on stage and oozing sex appeal, that was just an act.

“The risqué outfits had their issues too. Tina didn’t always wear a bra under her tiny dresses. I remember one night she was wearing a gold chainmail dress on stage and the ­double hooks came undone.

“I was in the wings and she turned to me, holding her breasts as her dress started to fall. I ran on and hooked it up.

“Another night Shirley Bassey came to see her perform at the Fairmont Hotel’s supper club in San Francisco.

“Champagne had been flowing all ­evening and as she got up, saying, ‘Oh, where’s Tina?’ her heel caught the tablecloth and the table — everything, went on the floor.

“Shirley was left lying face down. She later told Tina, ‘Darling, I had to lie there and let them check my pulse’.”

Despite her amazing career Tina never fully recovered from her ­abusive first marriage and even kept a shotgun in her bedroom.

She threatened Michael ­Jackson’s brother Randy with it when he visited Tina’s house ­looking for his girlfriend after an argument.

American Eddy, who lives in London’s West End, said: “Randy was in such a rage he threw a potted palm plant through Tina’s window. She shouted, ‘I left all that ghetto stuff behind and I’m not ­having it’. She grabbed the shotgun and warned him off her property.

“When he didn’t move, she fired to make him go.”

Today Tina lives in Switzerland with her second husband, former music executive Erwin Bach, who she ­married in 2013.