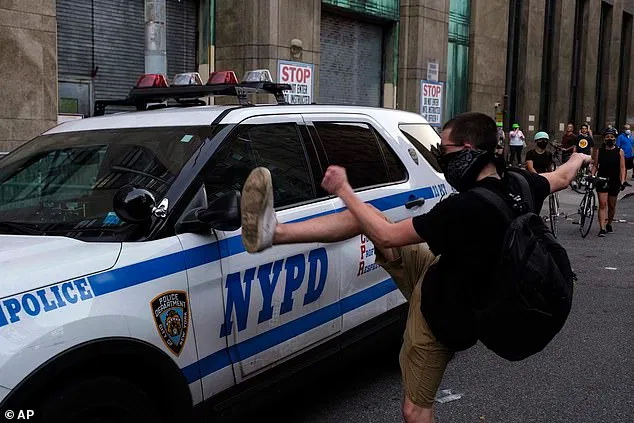 The Justice Department declared New York City, Portland and Seattle as ‘anarchist jurisdictions that can have federal funding ripped away for failing to clamp down on violence according to its criteria.

It listed the three cities as among those ‘that have permitted violence and destruction of property to persist and have refused to undertake reasonable measures to counteract criminal activity.’

The designation comes with billions of dollars in federal funding at stake, following President Donald Trump‘s order to make the designations amid violence and property damage that occurred during a summer of protests over the killing of George Floyd by Minneapolis police during his arrest.

The agency made the designation in a document it titled: ‘Memorandum on Reviewing Funding to State and Local Government Recipients That Are Permitting Anarchy, Violence, and Destruction in American Cities.’

It comes weeks before Election Day while President Trump campaigns across the country on ‘law and order.’

The White House Office of Management and Budget is to make further determinations in the coming month.

The financial stakes for a city of New York’s size are huge. Federal funding accounts for $7 billion in funding as it faces shortfalls amid the coronavirus, NBC New York reported.

Protesters clash with police during a rally against the death of Minneapolis, Minnesota man George Floyd at the hands of police on May 28, 2020 in Union Square in New York City

The memo lists Portland (above), Seattle , and New York City

A protester kicks a police vehicle in an attempt to break its side mirror during a ‘Solidarity with Portland’ protest Saturday, July 25, 2020, in New York. The memo faults DAs in the city for failing to prosecute disorderly conduct

Mayhem and chaos in the CHAD/CHAZ zone of Seattle, at midnight of the day that police took back their precinct and arrested over 40 protestors who were occupying the Capitol Hill area, following the first set of riotous protests following the murder of George Floyd

The decision was accompanied by a statement from Trump loyalist Attorney General Bill Barr, who recently visited Chicago, another city Trump and the White House repeatedly single out for being saddled with violent crime.

‘When state and local leaders impede their own law enforcement officers and agencies from doing their jobs, it endangers innocent citizens who deserve to be protected, including those who are trying to peacefully assemble and protest,’ Barr said.

‘We cannot allow federal tax dollars to be wasted when the safety of the citizenry hangs in the balance. It is my hope that the cities identified by the Department of Justice today will reverse course and become serious about performing the basic function of government and start protecting their own citizens.’

In the case of New York, DOJ cites a 177 per cent jump in shootings in July compared to the prior year.

It called out DAs in Manhattan and Brooklyn who have ‘declined to prosecute charges of disorderly conduct and unlawful assembly arising from the protests.’

It also called out Portland for the way it handled 100 nights of consecutive protests, and Seattle for allowing protesters to set up and maintain the ‘Capitol Hill Autonomous Zone’ (CHAZ) downtown.

The release states that they have ‘permitted violence and destruction of property to persist and have refused to undertake reasonable measures to counteract criminal activities.’

The move follows a directive by President Trump for the agency to designate ‘anarchist jurisdictions.’

The move to have DOJ call out local police forces for changes to their police budgets comes after the Republican Party spent decades building the brand as the party of federalism and local control.

‘For the past few months, several state and local governments have contributed to the violence and destruction in their jurisdictions by failing to enforce the law, disempowering and significantly defunding their police departments, and refusing to accept offers of federal law enforcement assistance,’ Trump said earlier this month announcing the program.

‘To ensure that Federal funds are neither unduly wasted nor spent in a manner that directly violates our Government’s promise to protect life, liberty, and property, it is imperative that the Federal Government review the use of Federal funds by jurisdictions that permit anarchy, violence, and destruction in America’s cities,’  said.