As royalties they should stay neutral, but they support Biden. Such jerks. 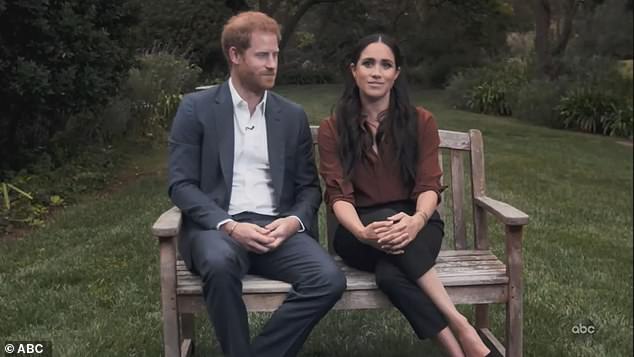 Prince Harry and Meghan Markle want Joe Biden to become the next President of the United States.

They haven’t actually said that in so many words.

But it’s very obvious from a video message they released last night via Time magazine which way they want the result of the election to go and it’s not in Donald Trump‘s direction.

Meghan, a US citizen and well-known Trump-hater (she’s called him ‘divisive’ and a ‘misogynist’ and once told me herself how much she loathed him) said: ‘We’re just six weeks out from Election Day and today is National Voter Registration Day. Every four years we are told the same thing, that this is the most important election of our lifetime. But this one is.’

She added: ‘When we vote, our values are put into action and our voices are heard. Your voice is a reminder that you matter, because you do, and you deserve to be heard.’

Prince Harry and Meghan Markle have spoken out about the upcoming U.S. election, in a stark break with British tradition that prohibits royal involvement in politics

Harry, after saying he can’t vote in the States and, like other royals, doesn’t vote in UK elections, urged Americans to vote and said: ‘As we approach this November, it’s vital that we reject hate speech, misinformation and online negativity. When the bad outweighs the good, for many, whether we realize it or not, it erodes our ability to have compassion and our ability to put ourself in someone else’s shoes. Because when one person buys into negativity online, the effects are felt exponentially. It’s time to not only reflect, but act.’

Although they never mentioned Biden’s name, it is crystal clear whose side they’re on and it’s not the guy sitting in the White House tweeting hateful disingenuous rhetoric 24/7.

By expressing themselves in such a brazenly partisan manner, they’ve crossed a massive line which should now have serious consequences for the couple who specialize in wanting their royal cake and the freedom to eat it.

The Royals don’t do politics.

It’s one of the cast-iron rules of being a member of the Royal Family – that you don’t spout off your own political opinions for public consumption because it would damage the integrity of the Monarchy.

In the video Meghan said: ‘When we vote, our values are put into action and our voices are heard. Your voice is a reminder that you matter, because you do, and you deserve to be heard’

On the Queen’s official website, it states: ‘As Head of State, The Queen has to remain strictly neutral with respect to political matters.’

This is because Her Majesty has to deal with governments of all political persuasion, both at home and abroad, and must be seen to be scrupulously impartial to them all.

Queen Elizabeth II has protected this neutrality ferociously during her 65-year reign, never once telling us a political opinion or identifying with any ideology.

Of course, that doesn’t mean she has no opinions.

In her private weekly meeting with the 14 British Prime Ministers who’ve served under her, she regularly tells them exactly she thinks.

But she never expresses those views in public.

Let alone interferes in the politics of another country that isn’t even a member of her beloved Commonwealth.

It’s a rule that other members of the Royal Family have generally assiduously followed, knowing that to publicly declare any kind of partisan views would make the Queen’s life extremely difficult.

But it appears Meghan and Harry didn’t get the memo.

Or rather, they got it – but they don’t want to abide by it.

Queen Elizabeth II has protected this neutrality ferociously during her 65-year reign, never once telling us a political opinion or identifying with any ideology. She is pictured with Trump in June 2019 during his state visit

The royal rules, as they’ve made repeatedly clear, just aren’t for them which is why they quit the Royal Family in a blaze of self-aggrandising publicity at the start of this year to ‘find freedom’.

Only, they didn’t really quit the Royal Family at all.

They just quit the boring bits, like having to turn up to an old people’s care home on a wet winter Wednesday.

However, they kept many of their royal titles, probably a lot more than anyone realizes.

Harry, for instance, remains a prince of the United Kingdom, His Royal Highness Prince Henry of Wales, the Duke of Sussex, the Earl of Dumbarton and Baron Kilkeel.

Meghan, meanwhile, remains a princess of the United Kingdom, Her Royal Highness, the Duchess of Sussex, Countess of Dumbarton and Baroness Kilkeel.

They’re very proud of these titles.

For all their constant talk of ‘equality’, they deliberately brand themselves as royals, perhaps the most elitist, unequal, privileged group of human beings on earth.

And they do that because it makes them massively more commercially attractive to the likes of Netflix who just shelled out a rumored $150 million to have them produce woke documentaries.

Markle has made her position on the 2020 election clear in a number of appearances in recent weeks, expressing enthusiasm for the Democratic ticket

But keeping the royal titles prohibits them from sticking their noses into the political trough as they’ve now done.

Especially Harry, who is a UK citizen and sixth in line to the throne of the British Monarchy.

In other words, it’s possible – albeit thankfully very unlikely – that he might one day be King.

To spell out how this could happen in brutally simplistic hypothetical terms: if the Queen, Prince Charles, Prince William and William’s three children are all killed in a terror attack, we automatically get King Harry.

So, everything he does and says could carry enormous significance if he was one day the Monarch.

Yet here he is, the Queen’s grandson, telling Americans to vote against President Trump – the man to whom the Queen afforded an official state visit to the UK last year.

Harry’s comments have already gone down like a cup of cold vomit with Trump supporters who think he should keep his royal hooter out of their election.

And I don’t blame them for feeling angry.

It’s frankly outrageous for two members of the Royal Family to abuse their positions and embarrass their country in such a shameless way.

And I would say exactly the same if they suggested a preference for Trump over Biden.

As I’ve said many times, Meghan and Harry can do and say what the hell they like so long as they’re not living off British taxpayer money or trading off their royal titles.

Several weeks ago, they announced they will now be financially independent which if true, is good long overdue news.

But they cannot stay royals and take political sides in the way they’re now doing.

On their website, the Sussexes proclaim: ‘As they move to become members of the Royal Family, with financial independence, their commitment to The Monarch is resolute, and they aim to continue to fly the flag for Her Majesty Queen Elizabeth II, as called upon.’

Fine words, but how do they sit with them now deliberately sparking a political firestorm by directing US voters how to vote in an election?

Their typically self-interested intervention has damaged the Royal Family’s reputation for neutrality, and this self-evidently makes the Queen’s life more difficult.

It also makes a mockery of the Sussexes’ stated motivation for quitting royal duty, which, as their website details, was to ‘live a more independent life as a family, by removing the supposed ‘public interest’ justification for media intrusion into their lives’.

There can be no bigger ‘public interest’ justification for media intrusion than two high profile royals trying to influence the result of an election.

And they’re not ‘independent’ at all, they’re still royals with royal titles that bring them huge earning power.

The bottom line is this: if they don’t want to play by the royal rules, then they should give up all their royal titles.

Of course, this is about as likely as them stopping lecturing us all about equality from their $15 million Californian mansion.

So, Meghan and Harry have now left the Queen with no choice: she must strip them of their titles before they do even further damage.

The integrity and neutrality of the Monarchy demands it.