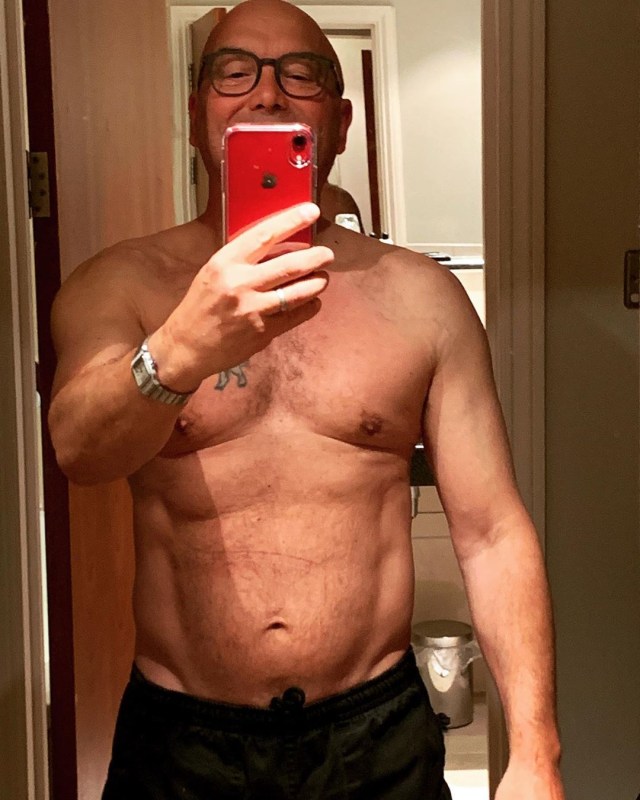 The chef amazed fans once again with his trim figure after throwing himself into fitness.

Gregg posed in the gym surrounded by treadmills, while wearing a pair of black shorts and white trainers.

He had a big smile on his face as he showed off his toned figure.

A second said: “Happy birthday Gregg looking fantastic! 😘 X” with a third remarking: “Happy belated. You’re an inspiration to us👊🏼”

The MasterChef star previously credited his wife Anne-Marie Sterpini, 34, as the reason he slimmed down.

He was inspired to get “fit and healthy” mainly to be able to see his son, Sid, 16 months, grow up.

Doctors had give Gregg a pretty serious warning that if he didn’t do something about his weight, he was on the fast track to a heart attack.

“Having my baby boy made me want to be fit and strong. I can now go for long walks, which I wouldn’t have been able to do before,” he told Closer magazine.

He also pointed to the two decade age difference between him and his wife as another major reason for getting into shape.

“Anne being younger than me was even more of an inspiration to be fit – you can have an old husband but she didn’t have to have a fat, old husband,” Gregg revealed.

The real threat of illness has pushed Gregg to keep up his healthier lifestyle no matter what.

“There are days when I lack motivation – but I still workout. I just look in the mirror and think ‘I’m 55 and I’m stronger now than I was at 25’,” he said.

“I still struggle with some exercises, but I’m leaner now since lockdown.”

The telly star married wife Anne-Marie, 34, in 2016 after they met on Twitter.

The star, who used to be 16½st, decided to overhaul his life a few years ago – after admitting he was drinking booze most days and frequently ordering takeaways.