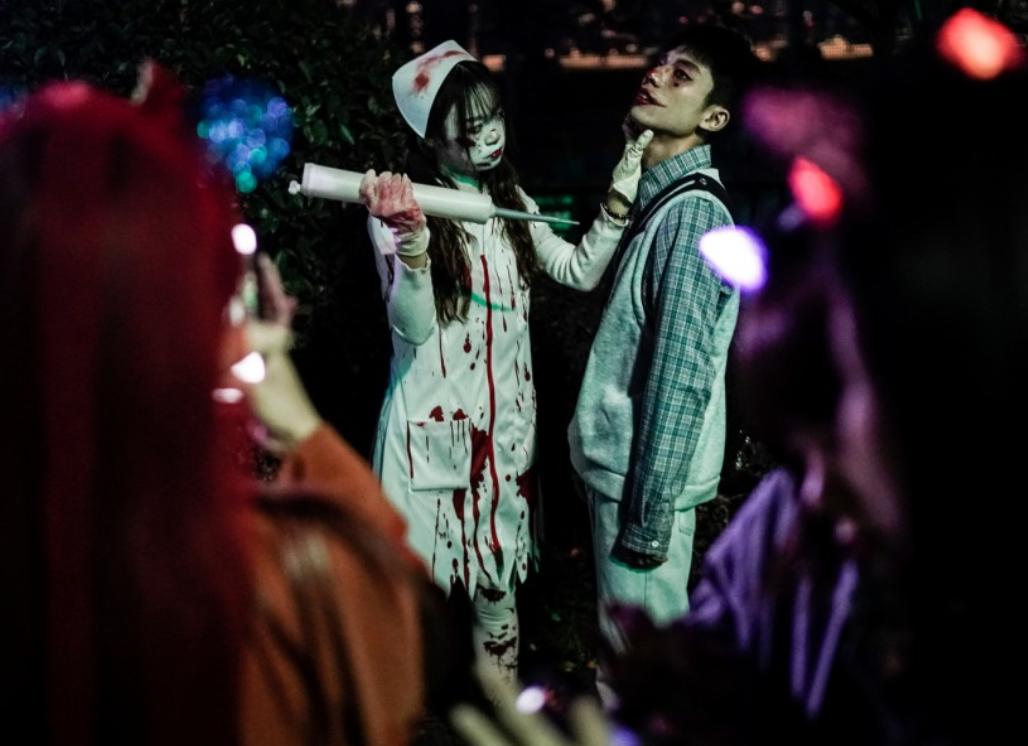 THOUSANDS of people pack the streets of Wuhan for Halloween while the rest of the world scraps celebration plans after a surge in coronavirus infections.

In pictures, several people are out enjoying Halloween celebrations in the Chinese city with some dressed as medical officials.

Another picture shows a reveler dressed as a nurse while mimicking giving an injection to a patient.

In what looks like a huge street party, locals are seen dancing and posing for pictures in various costumes.

Only a handful of residents are wearing masks, even though the majority of the world now have to do so as it battles with the second wave of the deadly bug.

Others who are wearing the masks have them lowered to their chin as they enjoy the party.

Celebrants are also seen in close contact while the rest of the world is forced to maintain social distancing guidelines and scrap Halloween celebrations in order to prevent even more infections.

The UK government earlier this week urged parents to use “common sense” if they plan to send their kids off trick or treating this year.

In a stark contrast a few months ago, Wuhan and China in general became a ghost town as 56 million people went under lockdown.

Streets became eerily deserted, shopping malls were empty, and schools were abandoned as the whole nation came to a standstill.

During the height of the lockdown in the country, public transport and some of the country’s biggest tourist attractions such as The Great Wall were also suspended.

Chinese New Year celebrations were also cancelled as the country struggled to keep a grip on the disease which has so far killed nearly 1.2 million people around the world.

The lockdown measures were in response to Wuhan being the epicentre of the virus.

It has been largely reported that coronavirus begun at a wet market in the city, where animals such as snakes and bats – both living and dead – were kept in close contact with humans.

Wuhan, with a population of 11 million was the first in the world to confirm a case of the infection.

In recent months however, as China began to report less cases of the virus, the country eased restrictions and has now been returned to normal.

Nightclubs where people dance in close contact have reopened and several festivals showing several people packed together have been had.

Earlier this month, Wuhan showed off turning an arena which was used to treat Covid-19 patients into a sports centre.

Meanwhile, countries around the world are still struggling to come to terms with the insurgence of the disease.

Yesterday, the world saw the single highest rise in infections as 500,000 cases were confirmed across the globe.