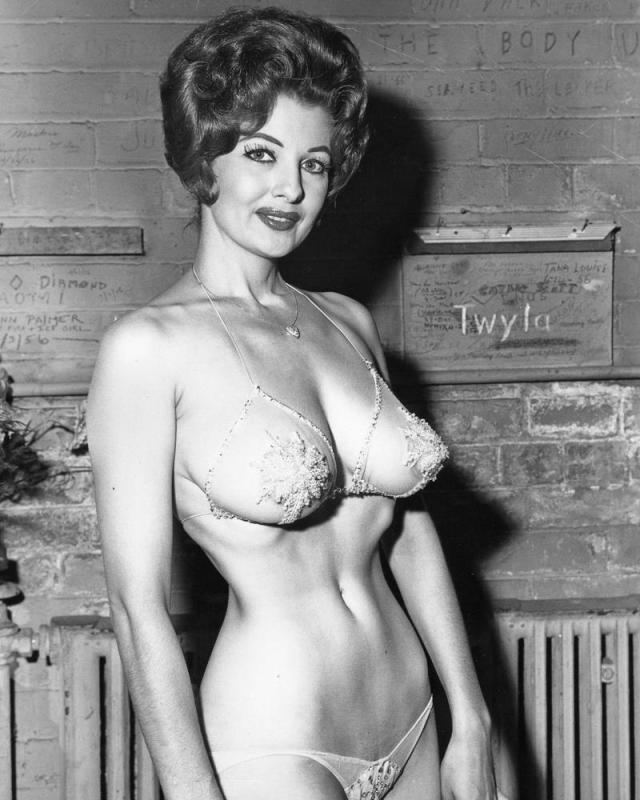 September 1955– American burlesque performer Blaze Starr poses for American painter Joseph Sheppard in his studio as he finishes a 4’X6′ portrait of her. Starr wears a semi-transparent bra and panty set with high heels. –Photo by Hulton Archive/Getty Images

(Above, left) 1954, San Francisco, CA– Designer James Berry strips tape and jersey form from the body of Burlesque queen Tempest Storm in preparation for a mannequin of the buxom striptease in San Francisco, where a celebration will mark the 1,000,000th dollar she has drawn through box offices to date. The completed mannequin will adorn the theater marquee where she appears as part of the event.  (Above, right) ca. 1954, Hollywood, CA– United Press Hollywood correspondent Vernon Scott muses over his tape measure after checking the dimensions of stripper Tempest Storm’s curves.  Scott interviewed the 24 year old strip queen in regard to the one million dollar insurance policy she has taken on her body with Lloyd’s of London. She said she took the policy, “to protect my million dollar income.”  She claims she amassed the million dollars in only four years of shedding her clothes on burlesque stages. Also, she is afraid she might injure herself as she did recently. For Lloyd’s of London, she listed her measurements as follows– neck, 16 inches; wrist, 6; ankle, 9; bust, 41, waist, 24; and hips, 34. She shed a sweater for her press conference but when gawking reporters asked if she’d ever visited a nudist camp, she blushed. “I shouldn’t say not,” she exclaimed. “That wouldn’t be nice at all.” –Images by © Bettmann/Corbis

Legendary stripper and burlesque dancer “Blaze Starr” was born Fannie Belle Fleming in 1932, in West Virginia. She ran-away when she was fifteen yrs old, and ended up in Washington, D.C., where she was discovered working as a hat-check girl by her first manager Red Snyder– who convinced her to strip. It was Snyder who gave her the stagename “Blaze Starr.” Their time together would be short lived after he tried to rape her. With her fiery red hair, and voluptuous 38D-24-37 figure, and sultry, energetic and captivating stage presence (her stage routines included a comedic exploding coach gag and having a large trained black panther untie a ribbon on her costume which made it fall to the floor), Blaze became a major headliner at the “Two O`Clock Club” in Baltimore, Maryland and earned the nicknames “Miss Spontaneous Combustion” and “The Hottest Blaze in Burlesque.”

Blaze Starr made $1,500 dollars per week at the peak of her stripping career. She achieved national stardom after she was featured in the February 1954 Esquire magazine article, “B-Belles of Burlesque: You Get Strip Tease With Your Beer in Baltimore.” Starr also appeared in many other men’s magazines, including– “Sizzle,” “Ace,” “Scamp,” “Sir!,” “Best for Men,” “Rogue,” and “Modern Man.” She also posed for noted fetish photographer Irving Klaw (as did Bettie Page). Starr achieved her greatest notoriety in the late ’50s for her affair with Louisiana governor, Earl Kemp Long. Their affair inspired the 1989 feature film “Blaze,” in which  she had a cameo role as a stripper.  Blaze Starr retired from stripping in 1983, and  now owns and operates the “Two O`Clock Club” in Baltimore, Maryland. via

Stripper “Tempest Storm” poses under a theater marquee for her burlesque act, 1954. The marquee reads– “Final Week/Tempest Storm and Her Bosom Pals.” –Photo by Graphic House/Getty Images. Storm was born Annie Blanche Banks in Eastman, Georgia. By the age of 20, she had already been twice married and divorced, and decided to head for Hollywood. Her natural beauty landed her work as a chorus girl– but her menacing figure and magnetism led her to a highly successful career in burlesque. She adopted the stage name “Tempest Storm” and made her professional debut at El Rey Theater in Oakland, CA.

Tempest Storm was legendary for her physical endowments– 44DD-25-35, and her natural, fiery, red hair. She was featured in numerous men’s magazines and burlesque movies, including Irving Klaw’s 1955 “Teaserama,” which also featured Bettie Page. In the late 1950s, her breasts, or her “moneymakers” as she called them, were insured by Lloyds of London for one million dollars. Storm officially retired at 67 yrs old, but would strip occasionally well into her eighties. via

circa 1955– Portrait of American burlesque performer Blaze Starr, wearing a bikini and high heels, sitting on a patio and holding up a beach ball to her lips. –Photo by Hulton Archive/Getty Images

Burlesque stripper Blaze Starr standing in front of her marquee

The legendary Blaze Starr outside her “Two O`Clock Club” in Baltimore, Maryland.