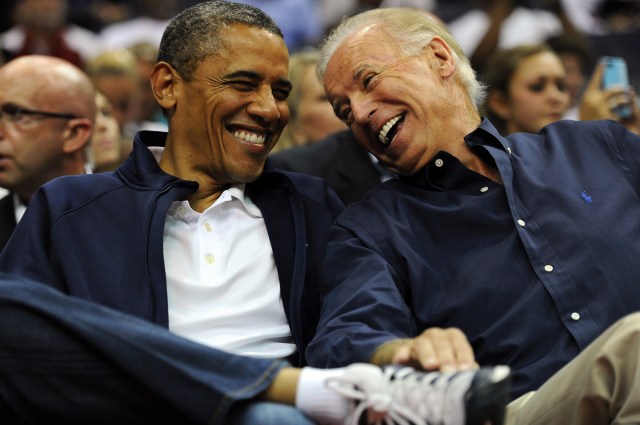 HE is a self-confessed “gaffe machine”, has a harrowing backstory and is older than any other previous US President – but Joe Biden has likely succeeded in ousting Donald Trump.

Labelled “Sleepy Joe” and accused of having dementia by his caustic opponent, in recent days Biden has apparently confused his granddaughter with his long-dead son and appeared to forget Trump’s name.

Yet Joseph Robinette Biden Jr is on course to become the Commander-in-Chief of the world’s most potent superpower.

As the 46th President of the United States, he will be 78 when taking office.

His folksie Irish charm has resonated with the crucial rust-belt Mid West states key to winning the election.

For many it is simply enough that he is not the bombastic Donald.

On December 18, 1972, a few weeks after a 29-year-old Biden had been first elected as Senator for Delaware, his world would fall apart.

He was in Washington finalising a deal on a new home for his young family when the call came through.

His beautiful young wife Neilia had been out shopping for a Christmas tree with their three young children when her car was hit by a lorry.

Neilia and their infant daughter, Naomi, were killed. His two young sons, Beau and Hunter, were also seriously injured.

Biden later wrote in his memoir: “I could not speak, only felt this hollow core grow in my chest, like I was going to be sucked inside a black hole.”

‘I HAD NOT KNOWN I WAS CAPABLE OF SUCH RAGE’

The teetotaller considered giving up the Senate seat he had just won and joining the priesthood.

He would take evening walks in rough neighbourhoods, looking for a fight.

“I had not known I was capable of such rage,” he wrote. “I felt God had played a horrible trick on me, and I was angry.”

Until that day, Biden’s rise to become the Democratic Party’s golden boy had appeared seamless.

The first of four siblings in a blue-collar Irish-American Catholic family, Biden was born on November 20, 1942, in Scranton, a coal and textile town in Pennsylvania.

During what Biden has described as a “hardscrabble” upbringing, mum Jean would tell him: “You’re not better than anybody else, but nobody is better than you.”

The family moved to Wilmington, Delaware, in 1953 after his father, Joe Sr, found a job cleaning boilers there.

Joe Jr struggled with a stutter which he has called “the single most defining thing” in his life.

He was teased by classmates, leading to playground brawls.

Biden said: “Even today I can remember the dread, the shame, the absolute rage, as vividly as the day it was happening.”

Once, a teacher who was a nun made fun of him, calling him “Mr. Bu-bu-bu-Biden”.

He walked out of class but mum Jean took him back and confronted the teacher, telling her: “If you ever speak to my son like that again, I’ll come back and rip that bonnet off your head.”

Biden overcame his stutter by reciting Irish poetry while gazing into a mirror.

More adept on the American football field than the classroom, he graduated 506th of 688 from the University of Delaware in Newark in 1965. While on Spring Break in the Bahamas in 1964, he met his future wife, Neilia Hunter, a student at Syracuse University.

Biden told a friend as they strolled on the beach: “I’ve got the blonde.”

He sidled over to Neilia, asked her out for dinner that night and in two years they were married.

He studied law at Syracuse University and was not part of the era’s countercultural anti-war demonstrations.

Biden practised law before winning a seat on a county council as his route into politics. In 1972 he won an election to become a senator for Delaware aged just 29. When his term began two months later he had just turned 30 — the minimum age to serve in the Senate under US law.

Then came the horror crash that devastated his young family.

In 1975 he met bank cashier’s daughter Jill Jacobs — nine years his junior — on a blind date.

Straight-laced Biden wore a suit and polished shoes and shook hands when it came the time to say goodnight.

Jill told her mother that evening: “I have finally found a gentleman.”

However, her first husband Bill Stevenson says this fairytale account is a lie and that Joe and Jill actually had an affair while Jill was still married to him.

Joe and Jill married in 1977 and had one child, daughter Ashley, in 1981. The couple’s favourite song is Van Morrison’s Have I Told You Lately (That I Love You).

In 1987 Biden had his first shot at the Presidency.

His bid was over in three months after he was accused of lifting a passage from a speech by then Labour Party leader Neil Kinnock.

He had also made several false or exaggerated claims about his early life.

The following year he collapsed in a hotel after a blood vessel ballooned in his brain.

After complications, doctors feared he might have permanent brain damage.

Running for President a second time in 2008, Biden described Barack Obama, his fellow Democrat challenger for the nomination, as “the first mainstream African-American who is articulate and bright and clean and a nice-looking guy”. It was a gaffe his campaign never recovered from.

A two-term buddy act as Vice President to Obama followed, with the US public becoming accustomed to his foot-in-mouth remarks — known as Bidenisms.

They include asking a wheelchair-bound politician to stand for applause and lamenting the death of the Irish prime minister’s mum when she was very much alive.

Biden seemed an obvious pick to take on Hillary Clinton for the 2016 nomination, yet tragedy would again engulf him.

In May 2015 his beloved son Beau Biden — who had also pursued a political career — died of brain cancer at the age of 46. Biden wrote: “He had all the best of me, but with the bugs and flaws engineered out.”

Joe was in no state to run for the White House, saying: “I wasn’t sure if I would be able to find the emotional energy, and I knew from previous experience that grief is a process that respects no schedule and no timetable.”

As the Trump years rolled on, Biden again felt the calling.

But shortly before he announced the formal launch of his 2020 Presidential campaign, a number of women complained that Biden had touched them in an inappropriate and unwanted manner.

He promised to be “more mindful and respectful” in the future. He later flatly denied allegations of sexual assault made by Tara Reade, who once worked in his office.

Then, last month, the New York Post published a photo of Biden’s son Hunter with a crack pipe hanging out of his mouth.

The paper — through a cache of emails — also claimed that when Biden was Vice President his son used his position to gain favours for a Ukrainian energy company on whose board Hunter sat.

Joe denies corruption and dismisses the allegations as a “smear campaign”.

As for wayward Hunter — who has a long history of alcohol and cocaine abuse and fathered a child by an ex-stripper — his father says: “My son, like a lot of people we know at home, had a drug problem. He’s fixed it.” In the last few days of campaigning there have been some apparent lapses of memory.

Even his most ardent fans must have winced when he hugged his granddaughter Finnegan and introduced her to a cheering crowd as “my son Beau Biden”.

It appeared Biden had clumsily meant to introduce her as Beau’s daughter.

Except, he had got that wrong as well.

Haplessly, he continued at the Philadelphia election day rally: “This is my granddaughter, Natalie. No wait, we got the wrong one.”

Finnegan is Hunter’s daughter. He finally corrected himself by draping his arm around her cousin Natalie, who is Beau’s daughter.

And last week Biden — who will sign off on any trade deal with the UK — even appeared to forget his Republican opponent’s name.

At a live concert, Biden mouthed ”about four more years of George, er, George . . . “ as wife Jill repeatedly muttered “Trump” under her breath.

The apparent lapses allowed Trump to attack his rival, with characteristic poor taste.

What a Joe Biden presidency could mean for the US on healthcare, guns & more

He posted a tweet of Biden photoshopped among a group of care-home pensioners, with a caption amended from “Biden for President” to “Biden for Resident”.

If, as seems likely, Joe takes the Oval Office, be prepared for a string of Bidenisms.

As the man himself puts it: “I am a gaffe machine — but, my God, what a wonderful thing compared to a guy who can’t tell the truth.”