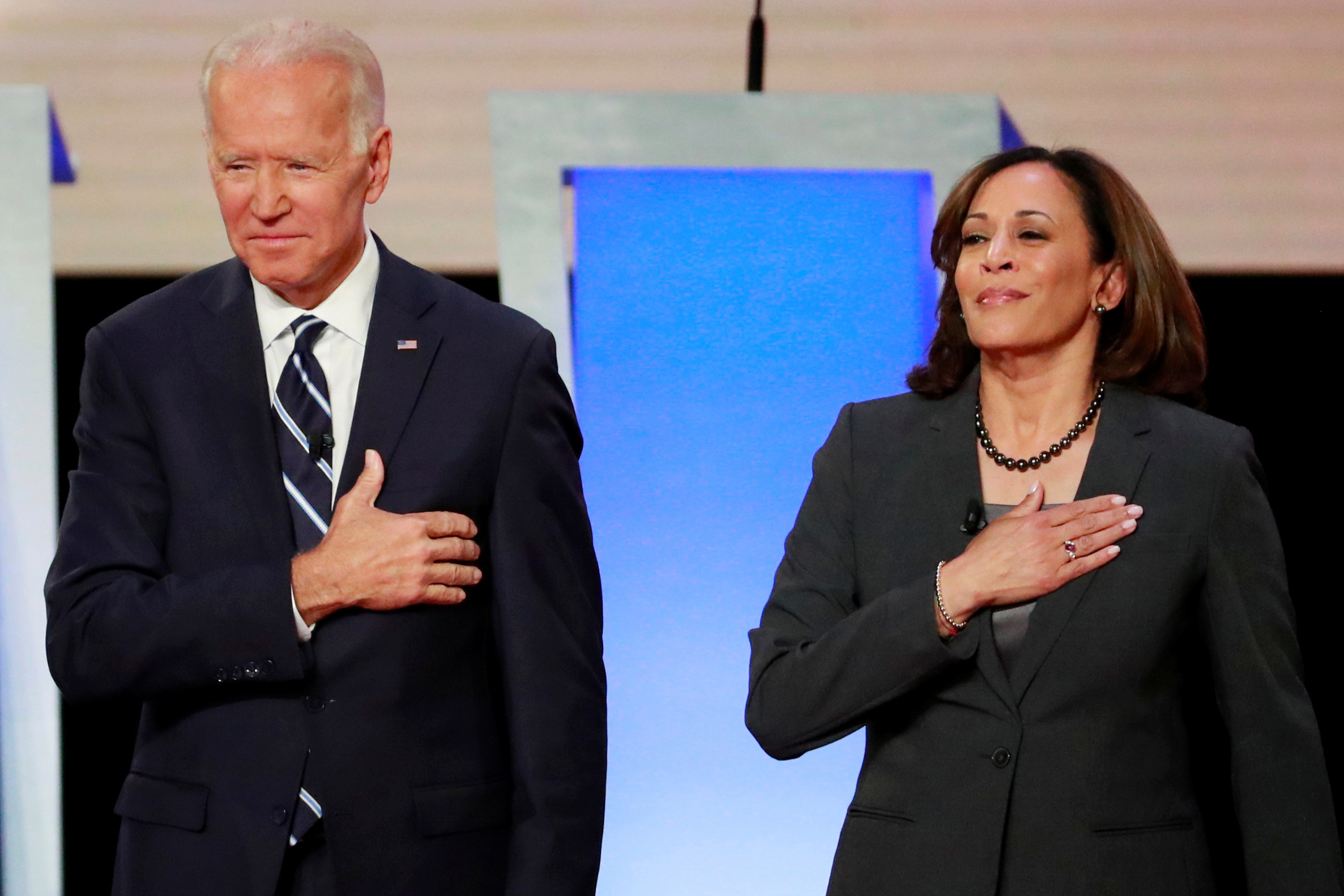 Victory in the swing state put Biden firmly over the magical 270 electoral college vote mark with 273 after days of suspense in one of the most nail-biting races in US political history.

⚠️ Read our US election live blog for the latest news & updates

According to the AP and CNN, the former VP has captured the 20 electoral votes from the crunch state – propelling him into the White House as the 46th President of the United States.

Biden fought back a deficit in several battleground states riding a huge wave in mail-in ballots which Trump branded “fraudulent” and repeatedly demanded counting be stopped.

The Republican firebrand today once again claimed he “WON THIS ELECTION” as he fumed on Twitter before playing a round of golf at his course in Virginia.

News of Biden’s historic win has sparked celebrations on the streets of American cities.

Video footage posted on social media shows people whooping for joy in Manhattan and Harlem in the Democratic stronghold of New York City.

Biden took the lead in battleground states Georgia and Pennsylvania on Friday – which inched him closer to the Oval Office.

Reacting to news of his win, the President-elect tweeted: “America, I’m honored that you have chosen me to lead our great country.

“The work ahead of us will be hard, but I promise you this: I will be a President for all Americans — whether you voted for me or not.

“I will keep the faith that you have placed in me.”

Last night, the Democrat gave a presidential-style speech from Delaware asking people to be more “civil with one another” amid ugly scenes with protesters clashing and gun-wielding mobs storming vote counts.

Biden said: “We may be opponents, but we’re not enemies. We’re Americans.

“We don’t have any more time to waste on partisan warfare.”

Trump had repeatedly urged his supporters to vote in person and his base has tended to be more bullish in the face of coronavirus.

But Biden’s backers were more cautious and many opted to send their ballots in the post, causing the late surge.

Trump sensationally accused Biden’s campaign of carrying out a “fraud on the American public”, but failed to offer evidence for his claims.

Today, he once again raged on Twitter about “tens of thousands” of “illegal” votes.

This comes as campaign insiders claim Trump has not prepared a concession speech and has told allies that he has no intention of admitting defeat, CNN reports.

The report says the Republican’s view the election was “stolen”, despite a lack of evidence, is being supported by his adult sons and some senior aides.

According to CNN journalist Jim Acosta, a campaign insider admitted the President’s team has “nothing concrete” to back up their claims of “fraud.”

Trump launched a barrage of lawsuits in key states to challenge the results forcing Georgia into a recount after Biden had wrestled back a slender lead.

But, in the end it wasn’t enough for the President and the Democrat challenger was able to get across the line.

Biden seemed confident of victory throughout the nail-biting race, which dragged on for days as postal ballots continued to be received and counted.

Yet unlike his rival he held back from declaring himself the winner, saying only that he believed he would emerge victorious “when the count is finished”.

On Thursday, as Biden dramatically reversed Trump’s gains in Nevada, Georgia and Pennsylvania, fans chanted “President Biden” as he entered his campaign HQ.

The president-elect made history after securing the most votes of any presidential candidate ever, smashing Barack Obama’s 2008 record.

Despite believing that he will beat Trump, Biden said on Wednesday that the pair are “not enemies.”

“To make progress we have to stop treating our opponents as enemies, we are not enemies,” he told reporters.

He later echoed those sentiments, stating “there will be no blue states and red states when we win, just the United States of America.”

However, Trump’s campaign team has insisted the “election isn’t over” as they blasted outlets that had called final results as votes were still being tallied.

Matt Morgan, Trump’s campaign general counsel, said: “Biden is relying on these states for his phony claim on the White House, but once the election is final, President Trump will be re-elected.”

Trump also blamed a burst water piper for his trailing behind in Georgia before he won his case to have a recount in the state.

The unrest erupted after the Associated Press declared Biden the winner of the state earlier that day – despite mail-in ballots still being counted.

They made the call when 80 percent of the ballots were counted but concluded that after analyzing the votes that there were not enough for Trump to catch up.

In Detroit, Michigan, Trump fans were filmed screaming “stop the vote” at a counting site on Wednesday, as they tried to keep ballots from being tallied.

The tense scene came shortly before CNN  had projected a victory for Joe Biden in Michigan.

The Democrat managed to beat Trump, who had claimed victory before all of the votes were counted.

Trump addressed the nation in an extraordinary speech from the White House on Wednesday morning in which he called for “all voting to stop” and suggested his campaign would take any defeat to the Supreme Court.

Trump fumed there had been a “major fraud” – despite there being no evidence to suggest any problems with ballots.

He said: “We did win this election. This is a fraud on the American public.”

Trump added: “This is a major fraud on our nation. We want the law to be used in a proper manner, so we’ll be going to the U.S. Supreme Court. We want all voting to stop.”

When will Joe Biden take office?

ON January 20, 2021, Inauguration Day will see Biden and his running mate Kamala Harris sworn in as president and vice president at the U.S. Capitol building in Washington D.C.

Visitors to the U.S. Capitol and the White House in October would have noticed preparations underway for the ceremony while Joe Biden and Donald Trump were campaigning.

Low-flying helicopters were swooping around town as part of beefed-up security precautions.

The Architect of the Capitol is currently busy constructing the inaugural platform from scratch.

The view from the West Front stretches the length of the National Mall, where Americans from around the country gather to catch a glimpse of history.

He went on: “To me, this is a very sad moment. And we will win this. As far as I’m concerned, we already have won it.”

His comments were immediately condemned by Biden’s campaign as “outrageous, unprecedented and incorrect” and even Trump’s Republican allies questioned his accusations.

Campaign insiders claim that Trump has not prepared a concession speech and has told allies that he has no intention of admitting defeat, reports CNN.

Today, with Biden set to be confirmed as the winner of the election, the Republican continued his combative rhetoric in a series of angry tweets.

He wrote: “Tens of thousands of votes were illegally received after 8 P.M. on Tuesday, Election Day, totally and easily changing the results in Pennsylvania and certain other razor thin states.

“As a separate matter, hundreds of thousands of Votes were illegally not allowed to be OBSERVED…

“..This would ALSO change the Election result in numerous States, including Pennsylvania, which everyone thought was easily won on Election Night, only to see a massive lead disappear, without anyone being allowed to OBSERVE, for long intervals of time, what the happened…”

He then claimed that vote counts were blocked by “tractors” despite the centres reportedly having independent observers inside during the process.

“Tractors blocked doors & windows were covered with thick cardboard so that observers could not see into the count rooms. BAD THINGS HAPPENED INSIDE. BIG CHANGES TOOK PLACE!”