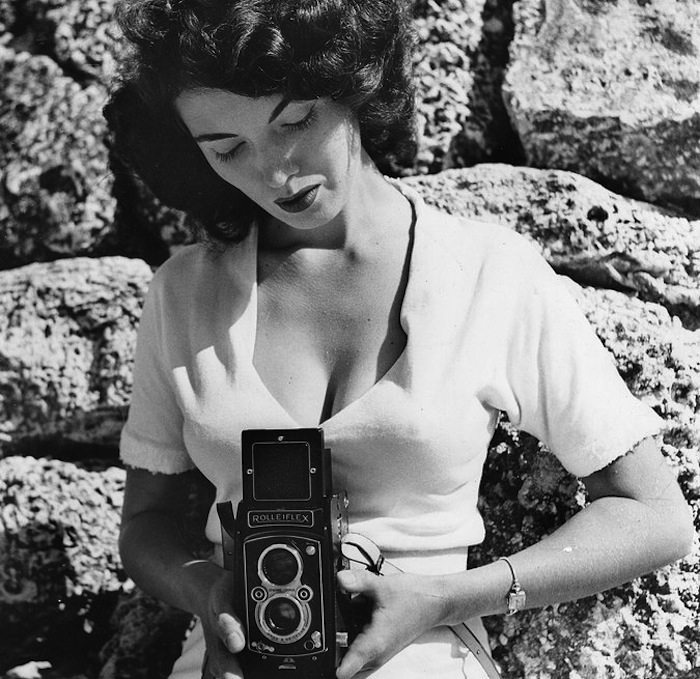 THE LEGENDARY QUEEN OF PINUPS AND PHOTOGRAPHY, PT II

Miami, 1954– Bettie Page, Kathleen Stanley, and Bunny Yeager. Photographer Bunny Yeager was assigned to do some catalog photos of a line of petticoats and one of the models didn’t show up. Bunny jumped in, taking off her clothes and putting on a petticoat, and took this shot using a self-timer on her camera.

Bunny Yeager knew from an early age that her life’s desire was to be a model, and set out by studying the “come hither” poses of classic painted pin-up art, and snipping pictures of sexy screen sirens Betty Grable, Jane Russell, Rita Hayworth, etc., that were hoarded away in her growing collection of scrapbooks. Right after high school Bunny Yeager made it official. “I took a modeling course from an agency with the finest reputation in Miami,” she recalled.

Soon Bunny Yeager (the girl from Wilkinsburg, Pennsylvania) was Florida’s most stunning and sought after model. “I was never a pinup model,” she was quick to point out. “I did not pose for men individually like Bettie Page did.” Bunny made a name for herself as a fashion influencer as well– designing and donning her own two-piece bathing suits. “All the other models were wearing one-piece Jantzen and Catalina suits. I made my own and am beginning to think I invented the bikini, after the French did it.”

Bunny Yeager, the young budding photographer, with her bevy of fresh-faced models on a shoot.

It was 1954 when Bunny Yeager, now married, decided to make the switch and get behind the camera. Her own formal modeling experience and creativity gave Bunny a sensitivity, insight and eye that no male photographer could touch. Female models instantly found themselves comfortable working with her, and appreciated the refreshingly caring and honest approach.

A stunning shot of Bunny Yeager, model-turned-photographer, with her Rolleiflex camera. “I was going to photography school at the time and was learning how to use transparency film using a large format camera to shoot it with. The instructor was so thrilled with what I’d brought in, he said, `You know, this is good. I think you should send this in to a magazine and try to get it published.’ I did and sold it right away. That’s how it all began.” — Bunny Yeager

In 1954, Bunny Yeager met the baby-banged beauty who will forever be hailed as the gold standard of saucy pin-ups– Bettie Page. Bunny talked for years about Bettie making a lasting impression on her, as it was the first time she’d ever worked with a model with no tan lines… Up until that time Bettie was working with the likes of Irving Klaw, and anyone else who would pay, posing for pictures that were exploitive and fetishist at best, and pornographic (by 1950′s puritanical standards) at worst.

The union of Bettie Page & Bunny Yeager was short, but sweet. The famous Boca Raton-based Jungle Betty shoot (Bunny also made Bettie’s sexy fur “swimsuit”), and Bettie Page’s 1955 January Playboy Playmate centerfold (Christmas pic of her trimming the tree on her knees) which made the pinup famous, are two epic highlights of their epic partnership.

“I decided I didn’t know where to send the pictures I was shooting. I was walking by the magazine stand and saw a new men’s magazine [Playboy]. I called them on the phone and asked if I could submit my photographs. As soon as they got them, Hugh called me up and was all excited, and wanted to buy one of the photos for Playboy. The picture was of Bettie decorating a Christmas tree, in just a Santa hat I had made for her.” –Bunny Yeager via

Bettie Page soon drifted away from Bunny Yeager– posing periodically for a few more years here and there, before disappearing almost entirely from the limelight. The tabloids sizzled with sensational speculation on Page’s mysterious disappearance.  Bunny Yeager recalls the day she witnessed firsthand the shift in Bettie Page’s priorities–

“It was in the Florida Keys that one night she saw a neon cross on top of a little church, and was drawn to it to go inside. From that day on, she got religious and decided to give up posing.”

“I asked (Bettie Page) if she liked animals, and said, ‘I’m going to take you to a wild animal tourist attraction, and they have live cheetahs, zebras, giraffes and all sorts of things running around free, without cages. We have to get with the animals to photograph them with you.’ She was very excited that we were going there. I have always liked animals, especially wild animals. They have a mind of their own, and you have to be very clever to catch them for the shot. I was very lucky with the cheetahs. The trainer said, `If they don’t like the way you are — the way you smell or act — they’ll walk away and have nothing to do with you. They have to like you.’ We didn’t have a bit of trouble with the cheetahs.” –Bunny Yeager via

Former model turned photographer, Bunny Yeager in this self-portrait from 1954.

Former model turned photographer, Bunny Yeager. She shot on the beach so much that after awhile didn’t need a light meter. Bunny could read the light by feel, and favored using her Yashicamat and Minolta TLR cameras.

Sammy Davis Jr. and Maria Stinger, Miami Beach, 1955. Sammy caught the photography bug and helped out Bunny Yeager as her assistant on this photo shoot. Bunny and Sammy were friends and she taught him photography.

Bettie Page on Couch with Legs in the Air, Coral Gables, FL — photo by Bunny Yeager, 1954

Dondi Penn With Chimpanzee In Car — photo by Bunny Yeager, 1959.

Glamazon on the beach — photo by Bunny Yeager, 1954