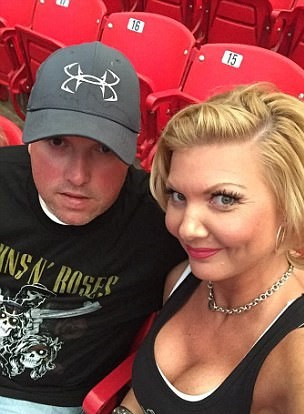 Jeff West faces two to 20 years in prison after the verdict was handed down late on Friday in Columbiana, news outlets reported.

The partially nude body of Kathleen ‘Kat’ West was found along the street in front of the couple’s suburban home in Calera in January 2018.

Prosecutors had said West killed his wife with a blow to the head from a liquor bottle.

His fingerprints were found on the Lucid Absinthe bottle that prosecutors said was used in the fatal blow inflicted upon her head.

The defense had argued she died in an accidental fall, as an autopsy report showed she had a blood alcohol content of at least 0.23 – three times the legal limit – at the time of her death.

During the trial, the court heard that his wife lived a double life as a stay-at-home mom and an online exhibitionist, says the Associated Press.

The defense told jurors during opening statements that her adult pictures – posted under the name “Kitty Kat West” – did not cause discord between the couple, and that Jeff West helped her.

Prosecutors told Circuit Judge Bill Bostick that West had killed his wife during a fight following a ‘date night’.

They cited text messages and voicemails – described as proof of frequent arguments between the two.

She had written: “I know you’re scared to tell me you don’t want to be with me, but it’s only hurting me more by lying,” al.com reported.

In response to her message, “if you don’t want me say it” she was told, “Baby, I want you. Do you want me? We really never talked after NYE.”

Kat warned West that he was “throwing away 14 years of marriage”.

Yet she also sent him nude photos of herself, adding in another message: “Thank you for making me feel sexy.”

West told investigators that they had a happy marriage.

But, there was some discord as his wife was keen to have sex four or five times a week.

He did not always want to have sex that often, reports AL.

“I’m not as sexual as she is. It is what it is. I’m happy with myself. She wasn’t happy with it,” he told cops.

West said his wife was bisexual, and the couple had talked about her having relations with other women.

He said: “She liked girls. She recently wanted to look into the lifestyle.”

However, during cross examination of the text messages, the court was also showed dozens of text messages that revealed intimacy and love between the couple.

For example, West replied to one of her raunchy photos, “looking good sexy momma”.

There was no envy over her job, with West telling police: “There’s nothing to be jealous about. Me and her (were) in a good spot.

“It’s just pictures. She got money for it.”

Defense attorney John Robbins said: “Yes, she had a website. She posed nude. She did that for her own self-esteem.

“Jeff was fully aware of what his wife did, and he assisted her.”

Cops said they believed Kat was killed on January 12, 2018, after West had taken photos of his wife wearing a pink bra, pink multi-colored underwear and pink stiletto heels.

These shots were taken on her phone for her Instagram page or subscription-only adult website after the couple had drinks and dinner at Red Zone Bar and Grill.

On their way home, they stopped at R&R Wine and Liquor, where West bought a bottle of Jameson whiskey for himself and Kat got a bottle of Lucid Absinthe.

They returned to their Calera home where both had about six drinks, West told police.

The jury was told that a forensic investigation determined that West’s left thumb and ring finger prints were found on the absinthe bottle.

The prosecutor said Kat’s death “did not result from a fall. When this person got hit, they were going down fast.”

West, supported by his and his wife’s family, said he was innocent, and claimed that Kat had been drunk and died accidentally after falling and hitting her head.

Kathleen West’s parents have publicly defended the man, whom they described during interviews as a devoted, loving husband and a good father to the couple’s teenage daughter.

The Army veteran worked as a campus police officer at Birmingham-Southern College before his arrest.

The victim’s mom, Nancy Martin, described her daughter outside court as an alcoholic who took medication for bipolar disorder and had a history of binge drinking.

West stayed with his in-laws after her death and before his arrest.

Jeff West faces two to 20 years in prison, and a sentencing hearing has been scheduled for January 2021.