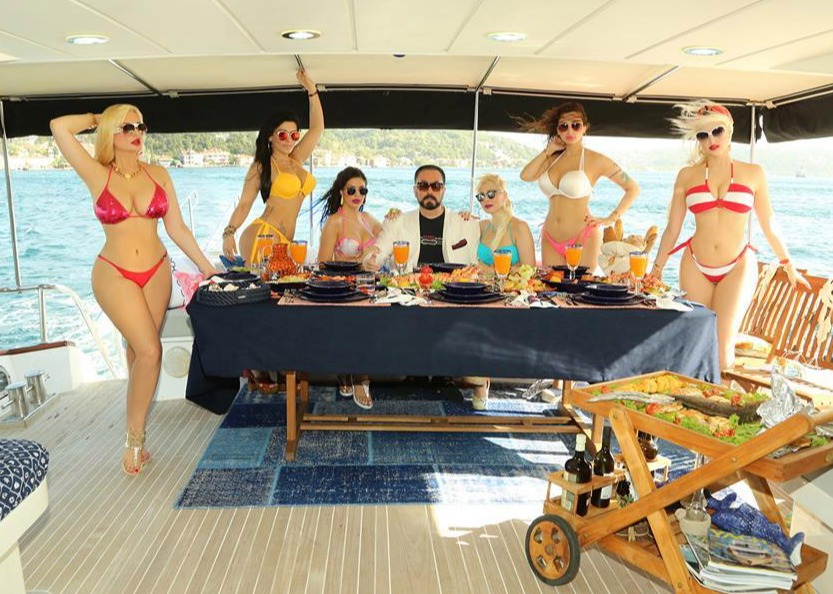 HE built up a controversial Islamic ‘sex cult’ over several decades, while living a life of luxury surrounded by glamorous women he called his ‘kittens’.

But Turkish televangelist Adnan Oktar, 64, has now seen his outrageous life swept away from under him after being jailed for 1,075 years for a series of horrific crimes.

Oktar, who has publicly denounced Darwinism for years, was known for preaching about Islamic creationism on his online TV channel – all while surrounded by scantily-clad women with bleached blonde hair and huge pouts.

But the dark extent of his cult’s inner workings has only been revealed over the last two years, after he was arrested in a series of raids alongside hundreds of his followers. From accusations of rapes – with members allegedly even keeping a ‘scoreboard’ – to horrifying claims of women being forced to take contraceptive pills after being assaulted, former members have painted a grim picture in court. Oktar was eventually found guilty of 10 separate charges including leading a criminal gang, sexual abuse of minors, sexual abuse and engaging in political or military espionage, according to the state-run Anadolu Agency.

There is no suggestion that any of the women pictured were involved in any of the allegations made against him.

Here we look inside his depraved life…

Oktar first rose to prominence in the 1990s, while leading the Science Research Foundation (or, in Turkish, Bilim Araştırma Vakfı or BAV). It focused on scientific activities “that target mass awareness concerning what the real underlying causes of social and political conflicts are”. However, it was his A9 television channel which he began broadcasting in 2011 which really made him a well-known name around the world. Videos uploaded online regularly showed him conducting sermons on Islamic creationism while surrounded by his ‘Kittens’.

Heavily made-up, with many of them sharing similar features, the women could be seen gathered together in a group, appearing to hang on his every word, while more clips showed him dancing with them. He’s also said to have named his young male followers his ‘Lions’. In one of the hearings in his recent trial, which heard harrowing testimonies from victims of sexual abuse, Oktar also claimed he had around 1,000 girlfriends, according to The Telegraph. “There is an overflowing of love in my heart for women. Love is a human quality. It is a quality of a Muslim,” he reportedly said, before adding on another occasion: “I am extraordinarily potent.”

Among the shocking testimonies in court, one woman – named only as CC to protect her identity – claimed she had been sexually assaulted by Oktar, among other women. She claimed the women would be raped and then forced to take contraceptive pills. Police officers found 69,000 contraceptive pills in Oktar’s home during one raid, but when asked about them, he reportedly claimed they were for treating skin disorders and other health issues.

Another former member made more shocking claims in court, according to Daily Sabah – reportedly saying some members would take part in a so called “turnike” (or turnstile) system, where new women entering the group had to have sex with men in the organisation. The news outlet quotes the former member as saying in court: “They had a scoreboard, and members would be elected ‘champion’ of the week, day or month based on the number of women they had sexual intercourse with. “Those with less number of rapes were accused of being gay.”

Before his latest arrest, Oktar regularly invited reporters into his home and ‘studio’, where he broadcast his TV show with his kittens. And when The Guardian met him in 2008, the reporter described his home as “a gaudy affair stuffed with figurines and gold-plated fittings”.

When asked about it, he reportedly told the news outlet: “I want to resemble Prophet Solomon. Prophet Solomon was like this. He used to be well dressed. He liked being well dressed. “His palace was beautiful; there were beautiful people around him. Allah is beautiful. Allah loves those who are beautiful, wants everywhere to be beautiful. Paradise is also beautiful. [The] aim of a Muslim should be beauty.” He has posed for several photos surrounded by his kittens in skimpy outfits and bikinis over the years too, while lounging on a boat and enjoying a very lavish lifestyle.

Meanwhile, Vice reporter Meher Ahmad also met him and took cameras around his huge home, with elaborate furnishings, a huge pool outside and a collection of fossils claiming to ‘disprove’ the theory of evolution.

However, Oktar’s brushes with the law and public controversies go back years. He allegedly previously sent thousands of unsolicited copies of his book, The Atlas of Creation – advocating Islamic creationism – to American scientists, Congress members and science museums. And he came under major fire in 1996 when BAV allegedly distributed a book entitled Soykırım Yalanı (or The Holocaust Lie).

It is said to have made outrageous and false claims about the deaths during the Holocaust and after widespread fury, BAV then published a book affirming the Holocaust, reportedly stating: “The Nazis subjected European Jews to indisputable and unforgivable cruelty during World War II.”

Oktar has always denied writing the original book and insisted the second reflected his own views.

Oktar has also had several brushes with the law and was initially arrested in 1999 and charged with using threats for personal benefit and creating an organisation with the intent to commit a crime. However, these charges were later dropped. He was then sentenced to three years in prison in 2008 for creating an illegal organisation for personal gain. A spokeswoman for his foundation (BAV) claimed to Reuters at the time that the judge was “influenced by political and religious pressure groups”.