I wish I could have “blown his fucking head off” myself 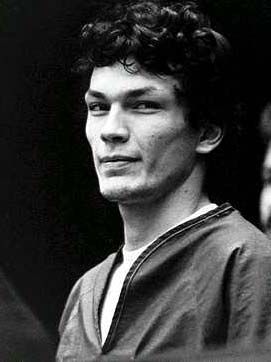 The Satanic killer, who terrorized Los Angeles residents in the mid-eighties with his rampant killing and raping spree, even gouged Maxine’s eyes out in one of his most horrific crimes. Ramirez was eventually captured by local man Manuel De La Torres and sentenced to death for the murder of 13 people – but was never executed and was even allowed to marry before his death in prison in 2013. In an exclusive interview, Peter, 59, who served in the Marines, said he still finds it difficult to live with what Ramirez did.

“Ramirez said in court ‘See you in Disneyland’, he was so cocky,” he said in the wake of the new Netflix documentary.

“I come from a big Italian family and we were all up in arms when he got married in jail. “If I had got to Ramirez before the cops I would have blown his fucking head off. “I would love to shake the hand of the guy who hit Ramirez over the head with a metal bar when he was caught. “When he got caught it was a really good feeling. I would have blown his fucking head off . “This guy was stalking older people, hurting children. He was a coward. “I had been living at the house where it happened a year prior and I strongly believe this wouldn’t have happened if I had been there. “Even if I was unarmed I would have taken care of it because of my training in the Marines.

“If he had seen me in the house he probably wouldn’t even have gone in. That’s difficult to live with.” Peter also revealed how he believes the Night Stalker committed the horrific act of cutting his stepmom’s eyes out as he was “infuriated” by Christian Maxine’s Bibles in the house. “It’s still hard to this day to talk about that,” he said. “Even if I hear a song about eyes I get pissed off and it drives me crazy and makes me upset, I have to turn it off. “I believe taking the eyes is something to do with Satanism. It’s pretty sick and dark. It’s like a calling card for Satanists. “Maxine was a very strong Christian, she was heavily into being a Christian and she was a bookkeeper for the Trinity Baptist Church in Downey.

“There would have been Bibles in the house and I can imagine he was infuriated by that. That could have fueled that part of the attack.” The father-of-one, who lives Costa Mesa, Orange County, was just 24, when sick Ramirez targeted his parents. They were the fourth and fifth people to die at the killer’s hands during his bloody killing spree in the mid-eighties. He was eventually convicted of killing 13 people, as well as several attempted murders and 11 sexual assaults – though there is a suspicion that he killed many more. The morning after the bloodthirsty attack, Peter recalls getting a call from his dad’s employee, who had discovered the bodies when he went to collect the payroll. Living nearby, he rushed to the scene but the local sheriff’s department would not let him in – saying the scene was too upsetting.

Tragically, Peter believes the killings could have been averted as the couple used to have dogs and guns in the house – but in a twist of fate they got rid of the dogs a week before the attack and had the gun unloaded because they were expecting some children to visit at the weekend. When Ramirez was eventually caught on August 31, 1985, and put to trial, Peter refused to go – believing the killer had a “Satanic hold” on the courtroom. “I didn’t go to the trial because he had already destroyed me enough. I didn’t need to let him destroy me anymore,” he said. “My sister Grace was going to go and they interviewed her and asked what she would do if she got in the courtroom and she said she would kill him so they said you can’t come in. “If I had gone to the trial I would have attacked him right there, for sure. “The hardest thing for me is that he was never executed. I would have liked to do it myself with a 12-gauge or a .50 cal.

And Peter, who works as a building contractor, says he still suffers from “major PTSD”. “I’ve had flashbacks and I used to have recurring dreams,” he said. “I would dream that I went to my parents’ office and they were there and still alive, somebody had got the information wrong and it was a mistake. “I had that dream many times, again and again. Your mind is trying to make it like it didn’t happen. “The VA have helped me a lot by providing counselling and therapy. “A lot of people think I’m too highly strung. Going through this trauma has affected every relationship I have.” But he comforts himself with fond memories of his dad, a World War II vet who owned two pizza parlors and and his step mom, an accountant.

He said his dad fought Nazis and saw people massacred in the war and would have killed Ramirez had he been awake. “My dad looked like a movie star. He was like Frank Sinatra, my sister said he was like a walking party. “He was like those Rat Pack guys, two Martinis at lunch and loving life. I had a great dad. “He served all through World War Two and was a staff sergeant. He was with the 2nd Armored Division which was commanded by General Patton. My dad had been through hell and come out the other side.Peter Zazzara

“He went all over, was in the Battle of the Bulge and received several medals. “He wouldn’t talk much about the war but he had a Luger with an ivory grip that he brought back. “I went into the military to follow in my father’s footsteps. “I believe my father was sleeping on the couch during the attack but if he had been awake he would have killed Ramirez.

“My dad was extremely tough, he fought the Nazis and had a scar on his neck from where a Nazi had tried to cut his ear off. “He saw a bunch of people from his unit massacred during World War Two. He was tough as nails, he had been through hell and come out the other side. “I have very good memories of my dad. We used to go fishing together and we would go shooting a lot. He took me to Italy for my 12th birthday.” The harrowing case has been thrown back into the limelight thanks to Netflix’s new docuseries Night Stalker: The Hunt for a Serial Killer. Peter says he has not watched the documentary as it would be too painful and hit out at Netflix for making it. “I haven’t watched it and I would never watch it. I saw a preview but I think it’s pretty despicable that they made it.

RICHARD Ramirez left Los Angeles residents terrified in the mid-80s as he skulked from home to home brutally murdering residents inside.

He was eventually caught in 1985, but not before he killed at least 14 people during his nearly year-and-a-half-long spree of violence.

Who was Richard Ramirez, the Night Stalker?

Born on February 29, 1960 and was an American serial killer, Richard Ramirez was a serial rapist, and burglar known as the Night Stalker.

Ramirez grew up as an epileptic child, before turning to drugs in his later years.

His older cousin Miguel was a heavy influence on his life, having fought in the Vietnam war, where he tortured and mutilated Vietnamese women.

At 13 years old, Ramirez watched his cousin murder his wife.

He turned to Satanism after moving to California in the late 1970s and was arrested several times for drug possession, burglary, and auto theft.

By the time he was murdering people himself, he used a wide variety of weapons, including handguns, knives, a machete, a tire iron, and a hammer – his victims ranged from aged 6 to 82.

The judge who upheld Ramirez’s nineteen death sentences remarked that his deeds exhibited “cruelty, callousness, and viciousness beyond any human understanding.”

How was the Night Stalker caught?

On August 30, 1985, Ramirez took a bus to Tucson, Arizona, to visit his brother, unaware that he had become the lead story in virtually every major newspaper and television news program across California.

After failing to meet his brother, he returned to Los Angeles early on the morning of August 31.

He walked past police officers, who were staking out the bus terminal in hopes of catching the killer should he attempt to flee on an outbound bus, and into to a convenience store in East Los Angeles.

After noticing a group of elderly Mexican women fearfully identifying him as “El Matador” (or “The Killer”), Ramirez saw his face on the front pages on the newspaper rack and fled the store in a panic.

He then ran across the Santa Ana Freeway, and attempted to carjack a woman but was chased away by bystanders, who pursued him.

After hopping over several fences and attempting two more carjackings, he was eventually subdued by a group of residents, one of whom had struck him over the head with a metal bar in the pursuit.

The group held Ramirez down and relentlessly beat him until the police arrived and took him into custody.

Who were Richard Ramirez’s victims?

Ramirez killed at least 14 people and raped and tortured at least two dozen more during the spring and summer of 1985.

His first known victim was 79-year-old Jennie Vincow, who was sexually assaulted, stabbed and killed during a burglary in her own home.

Nine months later from Vincow’s murder on March 17, 1985, he attacked Maria Hernandez, who managed to escape his clutches.

Callously, he went on to kill her roommate, Dayle Okazaki.

What followed was a spree of brutal murders that followed the same pattern: shooting, brutal sexual assault, and stabbing.

He often attacked elderly pensioner couples and at one time raped and murdered a nine-year-old girl.

Ramerez terrible crimes are set to be looked at in Netflix documentary called Night Stalker: The Hunt For A Serial Killer.

The docuseries premieres on the steaming platform on January 13, 2020.