“This Was The Best Investment I Have Made”: 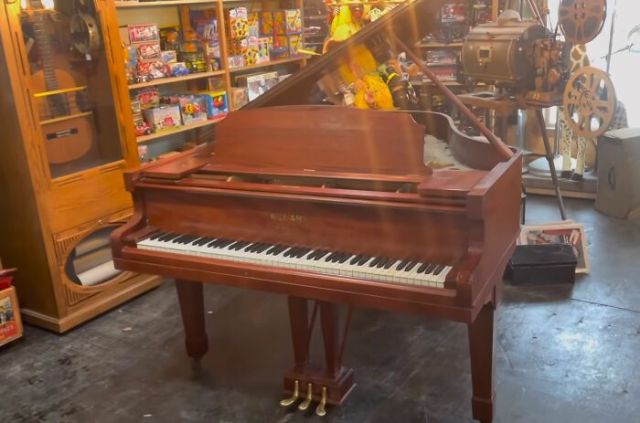 “Hi! I’m Alex Archbold, and I’ve been buying and selling antiques since I was 9 years old. From basements to scrapyards, I’ll look just about anywhere I can to find lost antiques and collectables,” the antique hunter from Edmonton, Alberta, Canada, says during the intro of his YouTube channel.

“Sometimes I’ll go big and buy everything,” says Alex, and that’s exactly what he recently did by purchasing all the contents of the house that belonged to a late piano teacher, Bette-Joan Rac.

“Growing up with little money and facing bouts of homelessness as a child, finding little treasures to resell helped bring in extra money, and fed my passion for learning about history,” Alex told Bored Panda. “My wife and I opened an antique shop almost 5 years ago in Edmonton Alberta Canada called Curiosity Inc. I carry a wide range of products, but we always look for the cool, unique, and unusual whenever we can.”

This past December, Alex purchased all the contents of the house that belonged to a late piano teacher

“I first met Madame Rac a couple of years ago when I was invited to look at her 1964 Cadillac in her garage, which hadn’t moved in decades. I never was inside her house as she said she had to tidy up first, so we signed the paperwork in the yard. From then on, I would run into her at coffee shops and we would have chats and say hi,” Alex told us.

“She was a bright flower, dressed very colorfully with a big smile. I was told she didn’t have much money, so at the time I was hopeful that the money from the sale of her car may help her out a bit. She was a patient and fun piano teacher, I’m told. And a very well-travelled lady. Going to Hawaii every year for vacation,” the guy added.

The guy paid $10,000 for the contents of the house with the hope that the stuff he’ll find there will get him the money’s worth. He was pretty doubtful, though. “I was told she had a modest income and so I wasn’t expecting much,” Alex shared with us. “When I saw the inside of the house for the first time, I was a bit shocked at the state of the home as she was a very nicely dressed lady.”

“It was in an extreme state of hoarding. In fact, the only reason I bought the contents was because I thought it might be a fun adventure for our YouTube channel and at very least, I would get a grand piano. It was impossible to see what was in the house because of how full it was at the time. Places were piled up to the ceiling,” said Alex.

However, the hoarder house turned out to be a real treasure chest

“Little did I know that the eccentric piano teacher I had met was, in fact, a millionaire!” said Alex.

The first day exploring the house, Alex and his team were emptying out some leaflets in the front room when a few little silver bars fell out of them. And that’s how the process of looking through every single book, magazine, newspaper and even shoe began. The treasures were hidden in the most unexpected places.

Throughout the house, Alex was able to find loads of pure silver dollars

“Our most impressive finds included wallets full of cash, a 100-ounce silver bar, and bags full of gold and diamond rings,” Alex told us.

The whole journey of looking through the stuff was documented in multiple vlogs that you can find on Alex’s YouTube channel.

Cash hidden in the most unexpected places

The first auction, held online by Edmonton’s Kastner Auctions, resulted in sales of over $250,000. “We invested $10,000 in buying the house contents as is, and we will have sold $400,000 after all is said and done after three auctions of the contents and treasures… This was the best investment I have made to date!” Alex shared with Bored Panda.

Julija Svidraitė is a Bored Panda writer and photo editor who recently got her bachelor’s degree in Psychology. Before Bored Panda, Julija worked as a social media specialist and a content creator at a marketing agency. She has also tried herself in a few different fields working as an intern: from practicing graphic design at a social media marketing agency, to being an assistant at a psychiatric hospital.
Besides writing, Julija is also very passionate about illustrating, reading poetry, drinking coffee, and watching crime documentaries.
You can find her in Bored Panda Office or reach her at julija.s@boredpanda.com. Read more »

Breathtaking History Photos That Will Give You The Chills

‘Boneshakers’, pedal-less ‘hobby horses’ and tyres made from leather: Fascinating book reveals the weird and wonderful bicycles of yesteryear