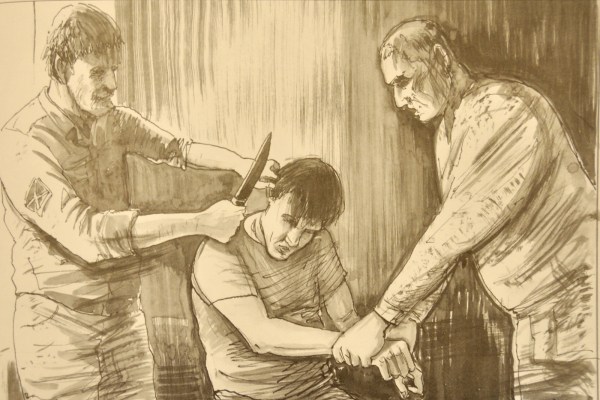 TORTURE dungeons where victims are mutilated with surgical tools, beaten with hammers and shocked with electricity are being run by Putin’s thugs in war-torn Ukraine, civil rights groups claim. Chilling photographs allegedly show the dank basements used as secret prisons for those who are held captive by Russia-backed rebels and the mercenaries that fight alongside them.

It is claimed more than 200 people – including civilians – are being held in the barbaric facilities inside former nuclear bunkers in eastern Ukraine.

Known as the War in Donbas, the conflict has raged since 2014 and left the former Soviet-state split in half – with 13,000 people dead and some 1.1million forced to flee.

One vile dungeon is said to be the playground of a vicious torturer known as “The Maniac”, who uses a surgeon’s kit to mutilate his victims.

The Maniac’s identity was revealed by Justice for Peace in Donbas, an alliance of 17 Ukrainian human rights organisations, and local media.

The Centre for Civil Liberties (CCL), based in Kyiv, told The Sun there are presently 267 people, including 226 civilians, locked up in these dungeons without facing any charges.

Prisoners have also told of the horrific torture they suffered in the prisons.

They claimed they were subjected to cruel physical torments and witnessed other victims being beaten to death.

Prisoners are allegedly shocked with electric wires attached to their genitals, have their fingers bent until they break, or are beaten by former boxers.

Sounds of screams are piped through speakers in the prisons as some inmates are stripped naked and left to sleep on wooden pallets beneath blinding lights.

There is no evidence to suggest the horrific human rights abuses are being directly orchestrated by the Russian regime. Two of the most notorious dungeons are the “Isolation Prison” in Dontesk and the “Batman Prison” in Luhansk – named after the moniker of one of the separatist fighters. The brutality of the dungeons is said to be designed to terrorise the population and deter any local opposition.  My left arm was fixed…The Maniac started to make a surgical saw cut between the fingers of my left handOleksandr Grishchenko. Locals have dubbed the “Isolation Prison” as the “The Place Where People Disappear”.

It contains eight ordinary multi-prisoner cells, two disciplinary seclusion cells, one basement bomb shelter and a single cell adjoining it, plus several “torture cellars”. It is here the leaked photographs are said to show. The images have been recently posted by the anonymous source on Telegram and claim to show tools used to torment inmates.

One image shows a military field telephone on a table, which is said to be used as a high-voltage electricity source for electrocuting prisoners. Ex-inmate journalist Stanislav Aseyev, recalled how victims are taped to the table, with one electric wire connected to the genitals and another to their behind. Water is poured over the body and an electric current is released, inflicting horrifying pain.  Inmates are also subjected to intense psychological torture, it is claimed. Guards intentionally broadcast sounds of the torture in the basement via a monitor screen that is located on the same floor as the cells.  Because of this, the prisoners constantly hear the cries of fellow inmates who were being tortured.

Oleksandr Grishchenko, a middle-aged civil servant, was slung into a torture dungeon after being wrongly accused of being a spy by a henchman for the Putin-backed Luhansk People’s Republic. Speaking to Euromaidan Press, which reports about the Russian puppet state, Grishchenko laid bare what happened on arrival at “Batman Prison” – where he was met by The Maniac. First, he was punched by a former professional boxer with a huge broken nose, who was now using his skills to abuse prisoners.  Then he said he was stripped naked and electrocuted before his arms were stretched and tied with cords.

What is happening between Russia and Ukraine?

RUSSIA and the Ukraine have remained technically at war since 2014. The conflict was triggered by the Ukrainian Revolution – when an uprising overthrew the pro-Russian government of Viktor Yanukovych. Vladimir Putin’s forces annexed the region of Crimea from Ukraine in a move which was widely condemned by the West. The conflict then spiralled when pro-Russian groups in Eastern Ukraine then took up arms against the state. Russia gave their backing the separatist forces which formed breakaway republics in Donetsk and Luhansk. Putin’s forces then launched a military incursion into these regions as they gave their support to the rebels. Almost seven years have now passed and the War in Donbas remains at a stalemate.

Just last week the US and Europe accused Russia of blocking solutions to try to finally end the conflict. “Russia must immediately cease its aggression in eastern Ukraine and end its occupation of Crimea,” said US diplomat Rodney Hunter. “We call on Russia to withdraw its forces from Ukraine, cease its support for its proxies and other armed groups and implement all of the commitments it made under the Minsk agreements.” It was then The Maniac – real name reportedly Serhiy Konoplytsky – entered with a piece of plastic pipe which he used to inflict a savage beating. Grishchenko said the tormenter’s accomplice then grasped his right index finger with his palm and began to bend it gradually towards the back of the hand to break it. He said: “[The Maniac] told me what and how he was going to do with me in a few minutes.  “He took out the tarpaulin cover of the surgeon’s field kit, unwrapped it, and started to show me the surgical instruments — cutting nippers, a surgical saw, scalpels, commenting on how he would snap off my fingers, saw my hands, and cut me. “In a few minutes, his assistants brought a door leaf, dumped me on it.

“My left arm was fixed… the Maniac started to make a surgical saw cut between the fingers of my left hand.”

The agony was horrendous. But the sadistic torturer warned Grishchenko that even if he passed out he had a special drug to quickly bring him around, saying he wanted to torture him “as much as necessary until we get the desired result”. On another occasion, The Maniac was said to have beaten another man to death with a hammer. A spokeswoman for CCL told The Sun: “This is just the tip of the iceberg. “Most people who have been suspected of disloyalty to the occupation authorities are prosecuted and sentenced for espionage, sabotage and treason.

PUTIN’S three “secret daughters” have emerged from the shadows yet he STILL denies they even exist.