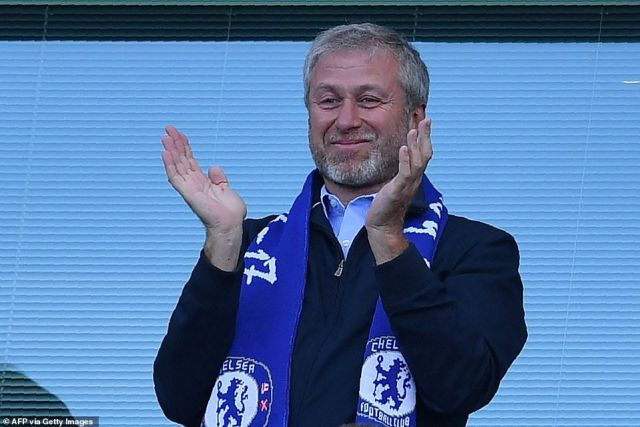 It’s got eight decks and room for a mini sub and anti-paparazzi lasers. But the truly amazing thing about the Russia oligarch’s new gin palace? It’s not even his biggest yacht

By Mark Edmonds For The Daily Mail

The city of Bremerhaven on Germany‘s northern coast has a reputation for being a quiet and reserved community. Right now, however, there is a palpable energy about the place. In a dry dock close to the water’s edge, the Lloyd Werft shipyard has been constructing a superyacht for the pathologically secretive Russian billionaire and owner of Chelsea Football Club, Roman Abramovich, that promises to be one of the most spectacular gin palaces ever built. And on Monday it hit the water for the first time, making its way from the dock to the Kaiserhaven basin with the help of two tugs. At 460ft, Solaris is not the largest or even the most expensive yacht in Abramovich’s fleet but, with a price tag of £430 million, it is the most costly custom-made superyacht under construction anywhere in the world and, arguably, the most technologically advanced. So what is Abramovich, 54, getting for his money? And why is he frittering hundreds of millions on a new superyacht that is actually smaller than his current flagship, the £500 million superyacht Eclipse?

At 460ft, Solaris is not the largest or even the most expensive yacht in Abramovich’s fleet but, with a price tag of £430 million, it is the most costly custom-made superyacht under construction anywhere in the world

While much of the project is cloaked in secrecy, we do know that it will have 48 cabins, a crew of 60 and space for 36 guests. The latter will be accommodated in luxurious state rooms and travel between the boat’s eight decks by lift. This floating colossus will be powered by two high-tech electrical engines called Azipods which power super-efficient propellers that can turn through 360 degrees, rendering a rudder unnecessary. Based on the spec of Abramovich’s other yachts and the latest trends in the world of superyacht ownership we can also assume that the friends and associates lucky enough to receive an invitation to cruise the high seas on Solaris will have access to a wide range of amenities.

The 460ft Solaris, equipped with a helipad and swimming pool, is set to undertake sea trials before the 54-year-old Chelsea owner sets sail in the summer

A gym, sauna, Jacuzzi and at least one swimming pool come as standard on boats such as these and, if it’s anything like the 530ft Eclipse, it will also have a beauty salon, complete with beautician and hairdresser. Eclipse has a night club with dance floor but Solaris will instead have an outdoor ‘beach club’ at the aft section of the upper deck.

Naturally, it will also bristle with the sort of ocean-going toys calculated to bring a twinkle to the eye of the most jaded of billionaires. A flotilla of 20 high-speed jet-skis. At least one helicopter to ferry guests from ship to shore. And it’s hard to believe that someone such as Abramovich will not invest in the latest must-have of the ocean-going tycoon, a personal submarine. They are, after all, the ultimate way to observe the natural beauty of the ocean without wearing a wetsuit, risking a shark attack or disturbing a set of blonde highlights. Superyacht submersibles are housed in a bay in the main hull accessed from the passenger accommodation by a system of secret, pirate-proof passageways. An entry-level model will set you back around $2 million and a top-end sub with all the optional extras could cost as much as $6 million. But one of the most sought-after subs among billionaires these days is one being produced by submarine manufacturer Triton via a joint venture with luxury car marque Aston Martin called Project Neptune. Until recently, function trumped aesthetics in the superyacht submarine sector but now there’s a demand for a fit that matches the look and feel of the other elements of the owner’s portfolio of assets, such as the private jet and the luxurious mother ship. And so the pilot of the $4.4 million Project Neptune model and their two passengers sit on hand-stitched leather seats as they head down up to 500m into the deep. Owners looking for more interaction with the seabed might opt for the SeaMagine-3C Aurora shown in the graphic on this page. It can accommodate up to three people and offers optional extras including ultra-high definition underwater cameras and robotic arms that the eco-conscious can use to pick up ocean trash — or souvenirs. It may be that Solaris will turn out to be one of the new ‘Explorer’ class of superyachts that — as their name implies — are built for much more intrepid cruising than the sort normally favoured by the oligarchs. While most are happy bobbing around the French Riviera, showing off their yachts to their friends in the summer or travelling ostentatiously to the Caribbean in winter, more seasoned sea dogs are looking for something more.

The Russian billionaire’s eight-deck yacht (pictured) has been fitted with 48 cabins and is able to sleep 36 guests, as well as 60 crew

As a superyachtsman of many years’ standing, Abramovich may well be bored by the limitations of St Barts and Antibes. Solaris might offer the chance to travel much further afield, perhaps even as far as the Arctic Circle, with the aid of ice-breaking capability concealed in the bow. Stewart Campbell is Editor-in-Chief of Boat International and an expert on the superyacht scene. He told the Mail that many oligarchs like Abramovich are investing in superyachts which can also be used for scientific research. ‘Now, presumably with Solaris, the owner is thinking, ‘Right, I want to be able to rub up against ice in Antarctic and see the Kamchatka Peninsula [in eastern Russia], or Patagonia’. All that kind of stuff that Eclipse just isn’t the right boat for. It could do it, but Solaris is obviously tailormade for that kind of expedition.’ The boats are not the only things that are changing in this market, the owners are getting younger too, says Jim Dixon of superyacht design company Winch. ‘We’ve designed yachts with speaker systems situated on the sundeck, which pump out enough volume in such a way that the owner could ride round on their jet ski and still listen to the music,’ he says. ‘We also have designed helipads which can be converted into an outdoor cinema through hidden speakers and screens.’

When you’ve got a ship full of demanding plutocrats, you need an A team when it comes to the crew. All will be hand-picked for experience and discretion. A level of discretion that will be reinforced by strict ‘gagging’ agreements forbidding them from gossiping about what goes on aboard on pain of ruinous legal consequences. Their personal conduct will also be rigidly policed. The kind of high-octane partying and general misbehaviour indulged in by the yacht crew in the Netflix reality hit Below Deck would not wash with any self-respecting oligarch — or their enforcers. And the ‘enemy within’ is not the only threat. External operators such as photographers working for the supermarket tabloids, jealous rivals and intelligence agents bent on gathering compromising material, or ‘kompromat’, can be serpents in the paradise of every publicity-shy billionaire. Happily for Abramovich, Solaris seems certain to be protected by a security set-up without equal. The man dubbed the ‘stealth oligarch’ due to his obsession with operating below the radar is a pioneer in anti-paparazzi systems.

As well as Solaris and Eclipse, the Chelsea owner (pictured) is reported to have previously owned at least five other superyachts, including the 162ft Sussurro, the 282ft Ecstasea, the Luna and the Pelorus, both 377ft, and the 371ft Grand Bleu

The Solaris will be Abramovich’s second superyacht and not as large as the Eclipse, a 533ft vessel. He has previously owned at least five other colossal yachts, the 162ft Sussurro the most recent to change hands in around 2017.

These were first employed on Eclipse in 2010. He installed a special shield system which had the capacity to target the photosensitive elements on digital cameras, and disable them with a laser. Now drones, rather than long-lens cameras, are the tech of choice for oligarch-hunting paps. And so privacy-loving plutocrats invest in anti-drone systems. These can detect potential intruders as far as 20km away and then provide GPS co-ordinates of both drone and pilot together with the device’s speed and compass heading. If any drone should have the temerity to breach the yacht’s 500 metre-plus electronic ‘exclusion zone’ it will find its control/video signals blocked, and be forced down, or back to base. Electronic snoopers are not the only threat on the high seas, of course. Pirates, kidnappers or special forces of hostile states are seen as real dangers. And this calls for a ring of high-tech security measures. Solaris will be fitted with a radar-controlled missile detection system, bulletproof windows and armoured protection around the wheelhouse and main cabin.

Abramovich’s Eclipse yacht off the coast of Portofino, Italy, in September 2013. The yacht is valued at £540million and is the largest which the Chelsea boss has owned

As well as Solaris and Eclipse, Abramovich is believed to have previously owned at least six other superyachts: the 371ft Le Grand Bleu, the Pelorus and the Luna (both 377ft), the 282ft Ecstasea, the 162ft Sussurro, and the 165ft Olympia. The latter was his first foray into yacht ownership. A relatively modest vessel, with room for only ten guests, it is reported to have been given to Russia’s President Vladimir Putin as an election present in 2002. Putin, whose official salary is a piffling £100,000 a year, has denied being the owner. Le Grand Bleu was acquired a year later from Microsoft tycoon Paul Allen. But in 2006, it was reported that Abramovich lost it in a game of poker in Barcelona against his friend and fellow oligarch Eugene Shvidler. Abramovich has always denied this. Abramovich rarely, if ever, visits London nowadays. He abandoned plans to construct a £1 billion new stadium for Chelsea in 2018, withdrew his application to renew his British visa, and now spends much of his time in Israel, where he owns the Varsano boutique hotel in Tel Aviv, which he bought for £17million in 2015.  He is also believed to have acquired a stunning mansion in a beachside town for £50 million —Israel’s most expensive house. But at barely one-eighth of the price of his new superyacht, it almost looks like a bargain.

Cabins: At least 24 guest cabins, but dozens more for the crew