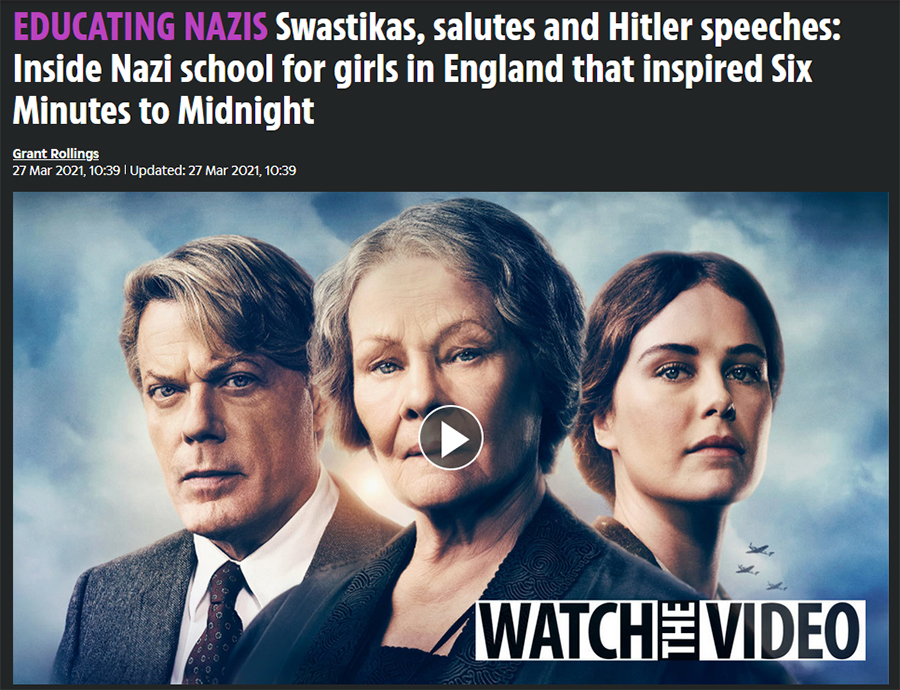 Swastikas, salutes and Hitler speeches: Inside Nazi school for girls in England that inspired Six Minutes to Midnight

IN a quiet seaside resort full of independent schools, the girls from Augusta Victoria College were barely cause for a second glance as they played catch on the beach.

But these students were at a very different kind of finishing school to the sort you’d normally find in Britain – it was designed to produce perfect Nazis.

The German pupils aged 16 to 21 performed Seig Heil salutes, listened to speeches from Adolf Hitler and prepared for a fascist future. Founded during the early 1930s, the school taught English to daughters and relatives of the Nazi high command and aristocrats. Germany hoped that these polite, well-bred girls would show Britain that we had nothing to fear from Hitler’s regime. Instead everyone at the school was put under suspicion of being spies. Even as Britain was heading towards war, the school in Bexhill-on-Sea on England’s south coast did not hide its allegiances. Their light blue blazers had a badge with the Union Jack in one corner and the swastika in the other, while the college’s prospectus also carried the symbol of Nazism.

When comedian Eddie Izzard heard about the Nazi school for girls he was so intrigued he wrote a World War II action drama about it. Six Minutes to Midnight stars Dame Judi Dench as the governess of the school, which overlooked the English channel.

During his research for the movie, Eddie spoke at length with British woman Mollie Hickie, who had been an au pair at the school, sharing a room with the daughter of Nazi war criminal Joachim von Ribbentrop. Mollie, who passed away in 2014, revealed that when the war with Germany began in 1939 the police kept a close eye on her. They felt they might not be able to trust me and so they always checked on my whereaboutsAupair Mollie Hickie

She said: “I suppose they felt they might not be able to trust me and so they always checked on my whereabouts.” Bexhill has a long standing connection with Germany, because German soldiers were garrisoned there during the Napoleonic Wars. The last empress of Germany, Augusta Victoria, visited the town a couple of times and the school was named after her.

Along with the Hitler Youth, which taught white supremacy to the majority of Germany’s children, there were finishing schools for the offspring of the rich and powerful. Among the Victoria College pupils were the goddaughter of Heinrich Himmler, the SS chief largely responsible for the Holocaust, the niece of the German ambassador Herbert von Dirksen and the daughter of Hitler’s ambassador to the Vatican.  Mollie said that the school’s governess Frau Rocholl did teach the students to be ‘good Nazis.’ She told Eddie: “She had to. More than your life was worth. She had to do that. That was the trouble of course people having to do these things.”

Others suggested it was freely done. According to Countess Hardenberg, who studied at Augusta-Victoria and wrote about it in her autobiography, Rocholl “apparently had very good relations with the Hitler regime.”  Frau Rocholl apparently had very good relations with the Hitler regimeCountess Hardenberg. On the day of Hitler’s birthday the girls sang Nazi songs and the swastika was hoisted up high, they also performed the Heil Hitler salute when they visited the German embassy in London ahead of the Coronation of King George VI in 1937. Joachim Von Ribbentrop, when he was presented as the German Ambassador in London, caused outrage by delivering a Sieg Heil rather than a handshake when meeting the king.

At the end of the war he was hanged for war crimes, having been one of the most pro invasion Nazis. Mollie, who shared a room with both Himmler’s goddaughter and von Ribbentrop’s daughter, said both of them “weren’t very nice.” Julian Porter, who is the curator of Bexhill Museum, told The Sun: “The school was very much about deportment, etiquette, how to fit in very well into the upper echelons of English society. “Nazi salutes were part of every day life at the school.”

Part of the school’s purpose was to prevent invasion – by persuading our politicians not to join the war. It’s aim was to work “for international friendship and good understanding.”  Julian says: “There is this strong diplomatic push. The message they wanted to get across was that the British Empire could get along with Hitler. “They weren’t hiding their Nazism.”

Whether it was involved in any spying, like in Izzard’s movie, is unclear. There certainly would have been British troop movements nearby in the run up to the start of the conflict in 1939. Among the soldiers billeted in Bexhill after World War II broke out was Goon Show comedian Spike Milligan. He wrote Adolf Hitler, My Part in His Downfall about his time there.

There were rumours that a number of high-ranking Germans stayed at the Cooden Beach Hotel in Bexhill just before war was declared. The presence of the Nazi girls had in a strange way offered reassurance to locals. While they were there, there was little chance of the Germans invading. The girls left in 1938 around the time of the Munich crisis, when it looked like Britain might declare war with Germany over its invasion of neighbouring Czechoslovakia.

When the British Prime Minister Neville Chamberlain came back with a peace agreement the students quickly returned. Julian says: “Frau Rocholl was saying right up until the outbreak of war that there wasn’t going to be a war. “And while the students were there, it was unlikely the war would happen.” But they did leave when all chances of peace ended.

A white swastika was supposedly painted on the school’s roof to make sure it wasn’t bombed by the Luftwaffe during the Battle of Britain. The large red-brick building on Dorset Road did survive and was most recently used as a nursing home. Mollie, who would have been 21 when she worked at the school, fell in love with a German man after visiting friends in Europe. They were engaged to be married and she met his family in Germany in 1939.

She was questioned by the German secret police, the Gestapo, prior to returning to Britain. Mollie told Eddie: “They did come one night, the Gestapo came, visited me and asked why, why was I in Germany.” And once she was back on home soil the British secret services asked what she had been up to in enemy territory. Mollie later did her bit for her country by becoming a Wren, part of the Royal Naval Service, and her German fiance was killed while fighting against the Russians on the Eastern Front.