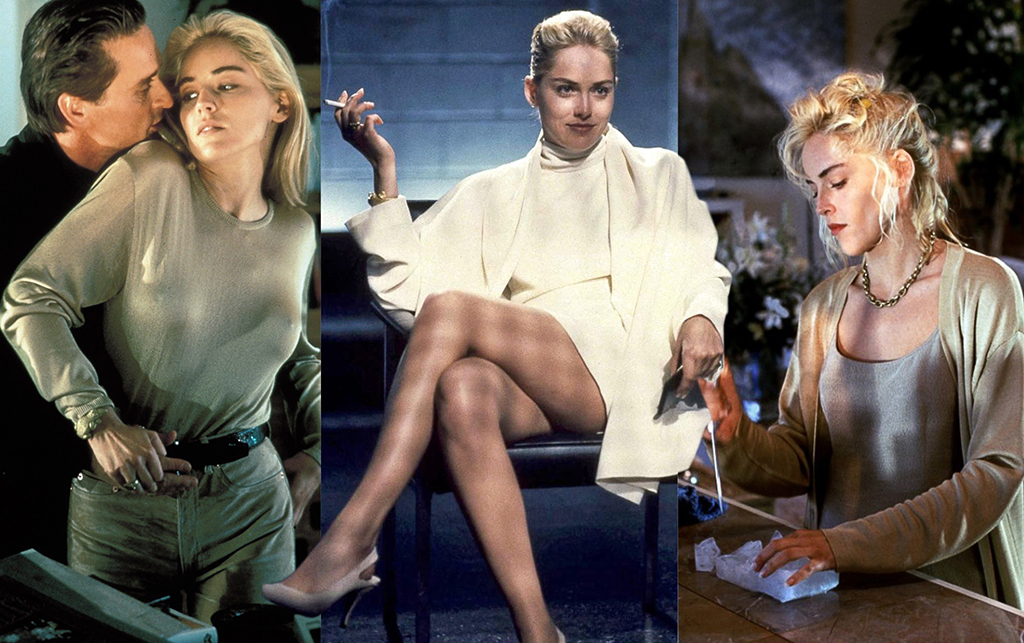 HER iconic role as a sexually-charged killer in film Basic Instinct is one of the most provocative in movie history.

But when Sharon Stone first turned up in Hollywood, she was told she was not “sexy” enough.

In her no-holds-barred autobiography, The Beauty Of Living Twice, out today, the 63-year-old actress reveals that her manager told her no one would hire her because, “I wasn’t, as they liked to say in Hollywood at the time, ‘fuckable’.”

Six weeks later, she was cast in Basic Instinct, where a scene in which she crossed and uncrossed her legs — to reveal she was not wearing any underwear — would capture the attention of the world.

The book also details how she has narrowly escaped death no fewer than seven times — surviving, among other things, a car crash, two massive haemorrhages and a stroke — and how she was only allowed to follow her acting dream after her older brother Mike was jailed for dealing cocaine.

Sharon writes: “With the incredible violence with which Mike was arrested and his business partners and their spouses were arrested, beaten, killed, and so forth, my parents began to believe that they should get me out of town. I of course agreed, for those reasons and my own.”

But her memoir also reveals even more sinister secrets about her childhood for the first time.

She writes how, aged eight, she watched her maternal grandfather sexually abuse her five-year-old sister Kelly, while their grandmother stood at the door to prevent them escaping.

This same man had also beaten her mother senseless as a child.

Her mother escaped the family home by marrying at 16, then falling pregnant.

Sharon says she has finally put the trauma of her childhood abuse behind her thanks to a “12-step programme for incest survivors”.

And she has also forgiven her own father, to whom she was very close at the time of his death in 2009, for beating her as a teen.

She writes: “I was dragged through the kitchen to the basement to get the crap strapped out of me with a belt.

“I wised up to that pretty quick and started bathing and putting on my nightgown and pink fuzzy robe very early, as I could put a big, soft paperback book in my underpants and not get found out.”

Growing up in near poverty in Pennsylvania’s Amish country, Sharon was almost decapitated aged 14 while taming a wild horse, which dragged her into a clothes line, which then got wrapped around her neck.

She writes that after some poor sewing by a surgeon, saying: “My neck looked like I had a red, then pink, then white rope tied around it.

“People used to say the strangest things to me about it. Not any of them nice or funny”.

Aged 18, thanks to her “extreme country background” and “sexual inexperience”, she fell pregnant to her first serious boyfriend.

He drove her to Ohio to get an abortion because she was too young to get one in her home state.

After the procedure, she lost a lot of blood but was too afraid to tell anyone so she, “Stayed in my room and bled for days”.

When she finally came out, she burned her bloody sheets and clothes before going straight back to school.

Sharon worked in McDonald’s and as a waitress in her teens, but she dreamed of making it in the movies.

Her Irish-American parents, however, disapproved of the idea of such a “frivolous profession” — until Mike got caught up in the violence of drug dealing.

Eager to get her away from threats that plagued the family after he was sent to jail, Sharon’s mum took her to New York after seeing Eileen Ford of Ford Models on TV.

Sharon writes: “We looked up the agency in the Yellow Pages. For two hicks it was rather amazing that we even found the place and saw Eileen.

“She told me she would like to throw me down the flight of stairs I had just come up and bounce the fat off of my ass. But that she would take me.”

So began some extreme dieting and a career in modelling, with Sharon roller-skating between jobs desperately trying, “To get the fat off”.

A small part in 1980 Woody Allen film Stardust Memories was her introduction to the movie business, and enough to convince her to move to LA to try for the big time.

But a “Bunch of crap movies and so-so television”, followed before she starred with Arnold Schwarzenegger in 1990 sci-fi Total Recall.

And she was 32 when she begged her agent to get her an audition for 1992 film Basic Instinct. However, the movie’s star, Michael Douglas, did not want her to even screen test.

She writes: “Hey, I was a nobody compared to him, and this was such a risky movie.”

But after 12 other actresses turned down the role of killer Catherine Tramell, he relented.

Sharon got the part — and it made her a superstar, thanks in part to THAT scene.

It is a controversy she is still angry about, claiming she only discovered the camera could see up her skirt once the film was finished.

Recalling watching it for the first time in “a room full of agents and lawyers”, she writes: “That was how I saw my vagina — shot for the first time, long after I’d been told, ‘We can’t see anything, I just need you to remove your panties, as the white is reflecting the light, so we know you have panties on’.

“Yes, there have been many points of view on this topic, but since I’m the one with the vagina in question, let me say, ‘The other points of view are bulls**t’.”

Once the movie came, everyone wanted a piece of her.

At the Cannes film festival that year, she had to wear a “beach cover-up as an evening gown; people had broken into my room to steal Sharon Stone’s belongings”.

She went on to have a dazzling career in Hollywood, winning multiple awards, including a Golden Globe for her performance opposite Robert De Niro in Martin Scorsese’s 1995 gangster film Casino.

Her no-nonsense attitude gained her a reputation for having the “biggest balls in Hollywood” and she claims to be the first woman to be, “Paid something considered respectable”.

But that is not to say she did not come across sexist and intimidating behaviour, too.

There was a male director who wanted her to sit on his knee while he gave her notes.

And the time she was threatened with the sack if she did not sleep with her co-star to help create on-screen chemistry.

She writes: “For me it’s called show business, not show take advantage of everyone.

“I don’t get taken advantage of either. Yes, I have been asked or told to do things that are wildly inappropriate, but I use my big-girl voice and say no.”

But in 2001, her career came to unexpected halt when one of her arteries tore, causing a stroke with bleeding in her brain and spine.

She was given just a one per cent chance of survival and underwent a mammoth nine-hour brain operation.

Even when she did pull through, her recovery was slow and painful.

I have been asked or told to do things that are wildly inappropriate, but I use my big-girl voice and say no.Sharon Stone

She lost her hearing and short-term memory, struggled to walk and started stuttering and seeing weird colours.

But Sharon, a devoted Buddhist, seems to say she believes her near-death experience was down to karma.

She writes: “I sometimes wonder if I had my own stroke because I let myself get too far off of my natural path, too far away from my true journey in life.

“I wonder if the body cries out when we are not following our natural truth.”

Having survived, she vowed to be a new version of herself — and went on to be awarded a Nobel Peace Summit Award for her activism for HIV/AIDS in 2013.

Her first marriage, to television producer Michael Greenburg, 69, lasted for six years from 1984 until 1990.

In 1998 she married journalist Phil Bronstein, 70.

When they divorced in 2004, she lost primary custody of her three-year-old son Roan, who they had adopted in 2000 after Sharon suffered multiple miscarriages.

She will not go into the details — saying she signed a confidentiality agreement — but claims she was, “Punished for changing the rules of how we see women”.

The upset literally broke her heart — she suffered a prolapsed valve — and led to her becoming anorexic.

She writes that without him, “I couldn’t function”.

But after 13 years playing, “A very long, very difficult game of custody chess”, Roan, 20, lives with her again — along with her two other adopted sons, Laird, 15, and Quinn, 14.

She adds: “Now, you are thinking: Is this really the Basic Instinct woman daring to tell us this? Yes, it is.

“That movie made people disassociate my humanness from me. I am the one who certainly should be telling you this.”

Three decades on from her most famous movie, Sharon is still one of the world’s greatest beauties — and insists she has not had help from the surgeon’s knife.

Setting the record straight over “remarks about my plastic surgery issues”, she says that after two massive benign tumours had to be removed from her breasts, the surgeon took it upon himself to give her a boob enlargement at the same time.

She writes: “My plastic surgeon thought that I would look better with bigger, ‘better’ boobs.

“I left there bandaged, and when unbandaged, discovered that I had a full cup-size bigger breasts, ones that he said, ‘Go better with your hip size — I’m certain you look better now’.

“He had changed my body without my knowledge or consent.”