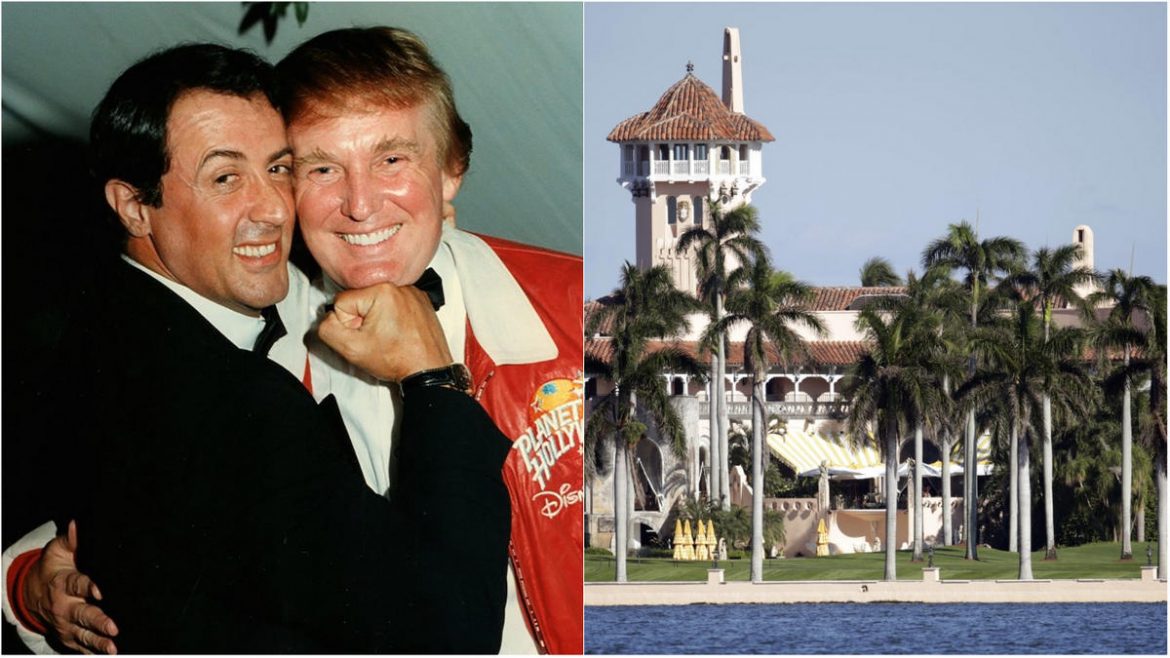 and poses for photos with guests just weeks after spending $35million for a 13,241sq ft mansion nearby in Palm Beach

‘Sly just became a member of Mar-a-Lago,’ the witness said.

Stallone was seen posing for photographs in a boxing stance with other guests.

Earlier this year, it was reported that the three-time Oscar nominee paid more than $35million for a 13,241-square-foot Bermuda-style property on the north end of Palm Beach.

Sylvester Stallone, the 74-year-old Rocky star, has joined former President Donald Trump’s Mar-a-Lago club, it has been reported. Stallone is seen right next to then-President Trump at the White House on May 24, 2018

Stallone reportedly financed the sale with a $15million, 30-year mortgage.

The one-and-a-half acre property – built in 2014 – features seven bedrooms with 10 full and two half bathrooms total in the two-story main residence and two guesthouses.

The opulent master suite includes a sauna, steam room, and office with a terrace.

The action star’s neighbors include Grammy winners Jon Bon Jovi and Rod Stewart as well as shock jock Howard Stern. He will also live near other Trump family members who have relocated to the Sunshine State.

The three-time Oscar nominee paid more than $35million for a 13,241-square-foot Bermuda-style property on the north end of Palm Beach (above)

In 2016, Stallone was quoted as saying that Trump was a ‘bigger than life’ figure though he stopped short of saying he voted for him. Stallone and Trump are seen above in February 1997

Last month, Donald Trump Jr. and his girlfriend Kimberly Guilfoyle snapped up a new home just a short drive away from Mar-a-Lago.  The political power couple, who sold their home in the Hamptons for $8.14million, forked out $9.7million for an 11,000-square-foot mansion in the exclusive gated community of Admirals Cove. The six-bedroom, 11-bath mansion is located in Jupiter – just 20 miles from Mar-a-Lago – meaning Trump Jr will be close to dad, Donald, and step-mom, Melania, who relocated to the resort after leaving the White House in January.   On top of the home price, Trump Jr. and Guilfoyle must pay a $195,000 membership fee for access to Admirals Cove’s marina, golf course and tennis courts. Admirals Cove boasts many rich and famous residents.  Baseball Hall of Fame member Mike Schmidt and Washington Nationals star pitcher Max Scherzer are among the 888 people who have homes there. Singer Celine Dion previously owned property in the estate.  Ivanka Trump and Jared Kushner are making Miami – which is 70 miles to the south – their base. The former senior presidential advisers have signed a one-year lease on a condominium in one of Miami’s most coveted oceanfront buildings, Arte Surfside, according to recent reports.

Donald Trump Jr. and former Fox News host Kimberly Guilfoyle, who have been dating for about three years, recently purchased a property in nearby Jupiter, Florida

The political power couple forked out $9.7 million for an 11,000-square-foot mansion in the exclusive gated community of Admirals Cove

The couple have signed a year-long lease on a penthouse ocean apartment while they wait for their home to be built on Indian Creek, an exclusive island community.  Ivanka’s brother, Eric, appears to be the last of the Trump children who have remained in the family’s former home, New York City – at least for the time being. Eric and Lara have been based in New York City for years, and are still understood to live there with their children. Last week, the couple were seen at Trump Tower in Midtown Manhattan just days after it was announced that Lara would be a contributor to the Fox News Channel.  In January, DailyMail.com reported that Tiffany Trump is looking for a property in Miami’s South Beach as she makes plans to join her family in Florida.   The 27-year-old and her billionaire heir boyfriend Michael Boulos had been staying at the swanky Setai Hotel in the glamorous neighborhood, but she is on the hunt for a place to call her own.   ‘She has been in Miami looking at properties,’ a source close to Tiffany told DailyMail.com. ‘She was staying at the Setai Hotel while she was viewing different options.’

Surprise! Marla Maples, 57, revealed last month that she has moved to Florida while proudly showing off her new license on Instagram

Reason: It seems likely that Marla moved to Florida to be closer to her daughter Tiffany and her future son-in-law Michael Boulos, who’ve been living in Miami since their engagement

Tiffany, President Donald Trump’s only child with his second wife Marla Maples, graduated from Georgetown Law School in May, but she has yet to take the bar exam, which she needs to pass to officially become a lawyer. Maples, the 57-year-old actress, revealed last month that she, too, has relocated to Florida. She posted an image on her social media showing her flashing her newly obtained Florida driver license. ‘Transitioning to a new life adventure with so much joy and gratitude,’ Marla captioned a photo of herself wearing a cowboy hat while proudly holding up her license.  Before joining Mar-a-Lago, Stallone was a guest at the club. In 2016, he attended its New Year’s Eve bash. As president, Trump offered Stallone the chairmanship of the National Endowment of the Arts, though the actor turned him down. Stallone said he was ‘incredibly flattered’ to have been offered the post.  Stallone backed John McCain’s presidential run in 2008 but he is not a registered Republican.

In 2016, Stallone described Trump as ‘bigger than life’, though he stopped short of endorsing his presidency. ‘I love Donald Trump,’ he told Variety Magazine. ‘He’s a great Dickensian character. You know what I mean? There are certain people like Arnold [Schwarzennegger], Babe Ruth, that are bigger than life. But I don’t know how that translates to running the world.’ Last week, Stallone revealed that he will not reprise his iconic Rocky Balboa character for the upcoming sequel Creed III. The 74-year-old famously created the character for himself in the 1976 film Rocky which he not only starred in but also wrote. And although he reprised the role for the first two Creed films his representative has told The Hollywood Reporter he is not involved in part three.

There were six films in the original Rocky franchise released over a 40-year period and culminating in the surprise 2006 hit Rocky Balboa. In 2015 Ryan Coogler resuscitated the franchise again by directing Creed which is about Rocky training Michael B. Jordan’s character Adonis ‘Donnie’ Creed. Donnie is the son of the late Apollo Creed who was Rocky’s rival in the original film series and was played by Carl Weathers. Creed III is due out on the day before Thanksgiving 2022.

The Trump family has decamped en masse to Florida. Ivanka Trump, the former president’s eldest daughter from his first marriage to Ivana Trump, and her husband, Jared Kushner, have also relocated to the Sunshine State

Ivanka and Jared signed a one-year lease on a condominium in one of Miami’s most coveted oceanfront buildings, Arte Surfside (pictured), the Wall Street Journal reported in January

The couple were expected to use the condo as a temporary home while they build a more permanent one on a two-acre plot they purchased on Indian Creek Island (pictured) – also known as the ‘Billionaire Bunker’ – for $31.8million late last year

Sly, who himself directed Rocky IV, is now gearing up to release his own recut version of that film and revealed this week that his work is done. ‘Last day of completing ROCKY 4 !!! Get Ready to RUMBLE!!!’ he gushed last Tuesday in the caption of an Instagram video showing him in the editing room. ‘You can go back and see a movie that you’ve done 50 years ago and you: “God, I’d love to reedit that,”‘ he said in the video. ‘And every director feels that same way, so it’s not about making a movie, it’s about remaking,’ said the smoldering Hollywood heartthrob. Meanwhile, Trump continues to be the most dominant Republican in American politics. He held court for party bigwigs at a fundraiser at Mar-a-Lago this weekend. On Saturday, the former president told GOP donors that the COVID-19 vaccine should be named after him as he admonished them to call it ‘the Trumpcine.’ He also called the November election in which Joe Biden won ‘bulls**t,’ according to the Washington Post, which cited an attendee, who also said he spoke for about an hour at his Florida Mar-a-Lago resort for a party fundraiser.

Trump is said to have called for the COVID-19 vaccine to be called ‘Trumpcine,’ according to a Twitter posting from a CNN reporter

He said he wished former Vice President Mike Pence had possessed the ‘courage’ to send the certification of the Electoral College votes back to state legislatures.

Most Democrats even think he won the election, Trump said, according to the Post, but they won’t say it out loud.

He repeated a line from 2015 calling immigrants crossing the border illegally violent criminals, this time saying ‘they’re coming in from the Middle East.’

‘They’re not sending their best people. You have murderers, you have rapists, you have drug dealers,’ Trump said, according to the Post.

The former president also hit out at Sen. Mitch McConnell of Kentucky, the former Republican Senate Majority Leader who’s since fallen out with Trump after pinning blame on him for the January Capitol riots.

McConnell is a ‘dumb son of a bit*h,’ Trump said in his Saturday remarks, according to a CNN reporter who was told by a person in the room.