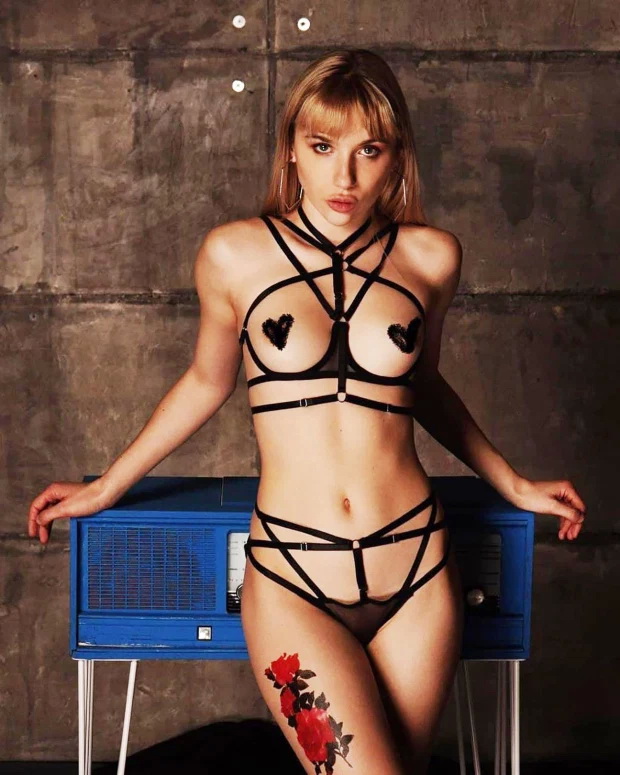 THE notorious so-called Butt Squad has flown home to Ukraine after being deported in disgrace from Dubai.

The models sparked an international scandal and were accused of “offending public decency” by posing naked on a balcony in the United Arab Emirates.

Ten of the 11 who were detained in custody arrived back in Kyiv overnight, and one will follow later after treatment for Covid-19 in Dubai.

They hit out at criticisms of them as “whores” and “escorts”, while one claimed they had been “forced” to pose naked or risk losing their payment for the trip.

There was no immediate comment from the UAE authorities but diplomats see the female group as having been treated leniently ahead of Ramadan, and lucky not to have been sentenced to six months in jail.

Among the returnees – jubilant to be out of detention and back in their homeland – was lawyer-turned-nude model Yana Graboschuk, 27, who told her followers: “Thank you for your support, you cannot even imagine how important it is for me now.”

Irina Sotulenko, 23, a philologist, who claimed she was “forced” to pose naked on the balcony fearing she would otherwise not be paid or given a ticket home, made clear she was happy to leave grim Dubai jail cell.

“Soon (I will tell) the details, I will share stories of fights for bread and so on.”

Another model Yulia, in her early 20s who called herself a “scandalous nude model”, posted: “It was a real horror.

“I would not wish anyone to go through this.

“We were praying every day to fly back to Ukraine – and we are finally here.

Model Ekaterina ‘Kate’ Kashenko said she was shocked by her jail time, and “upset” by derogatory comments of the women calling them “whores” and “escorts”.

She dubbed a “total **** up” the nude pictures which spread like wildfire on the web and led to arrests by Dubai police.

In jail – where they spend nine nights – “at first we were put in a small room with one mattress for 12 girls”.

She said: “We landed, finally we are in Kyiv.

“We suffered such an ordeal. I feel so upset.

She was “totally exhausted after the jail”.

Model Viktoria Rohalchuk posted the word “criminal” on her picture.

Other women closed their social media accounts as they landed back in their homeland.

The organiser of the controversial shoot Ukrainian-American organiser of the stunt – Vitaliy Grechin, 41, is believed to be still in custody in Dubai, amid fears he faces up to 18 months in jail.

A Russian man IT company boss Alexey Kontsov, 33, who posted pictures of the stunt is also thought to be in detention still.

A number of women – believed to include a Russian adult star – managed to escape Dubai before the police crackdown, it is alleged.

Grechin – seen in a picture playing the piano surrounded by 20 naked women – was detained soon after the balcony picture was taken in an elite complex in Dubai, and posted online, said Irina Sotulenko.

He has been previously pictured with a string of famous names including  Barack Obama – to whom he was a financial donor –  Hillary Clinton, George Clooney,  and Sylvester Stallone.

“All this because of the morons who came up with the idea to upload this to Instagram,” said Irina.

“It is just, Vitality Grechin. He is an adult man, how could he be such an idiot?”

Before being detained on 3 April, Irina posted a video to her boyfriend saying she had been “forced” to go on the balcony, otherwise they would not be paid for the modelling assignment.

“I told them, guys, we are in Arab country, let’s not show off.

“But, damn, we were forced to this balcony, took pictures and God knows what will be next.

“They brought a professional photographer.

“Well Grechin also took pics by himself, but there was a photographer too.”

In a video message to her boyfriend, she told him: “We were forced to this balcony in another hotel.

“We were photographed naked on the balcony.

“Someone took photos from another building.

“Now Vitaliy was summoned (to the police) and it looks like he will be sent to prison.”

Her boyfriend Vitaly, 30, who works in IT, said Irina knew she was going to Dubai for a nude shoot – but not that it would be in a public place leading to claims of indecency and offending public morals.

“They pushed them out onto the balcony,” he said.

“The girls began to be indignant, and asking why they were going there.

“They said: ‘This is a Muslim country, for this we will all have problems’.

“But they were told – ‘Do not forget who pays for it, please  go to the balcony.’

“So they went out onto the balcony and photographed them.”

Several hours later Grechin and others organising the bizarre shoot were detained, he said. After the pictures had gone on line.

He described the models as “in shock” over their treatment.https://imasdk.googleapis.com/js/core/bridge3.450.0_en.html#goog_1295514385One of the Ukrainian models detained in Dubai has told how she was “forced” to pose naked for infamous balcony shoot