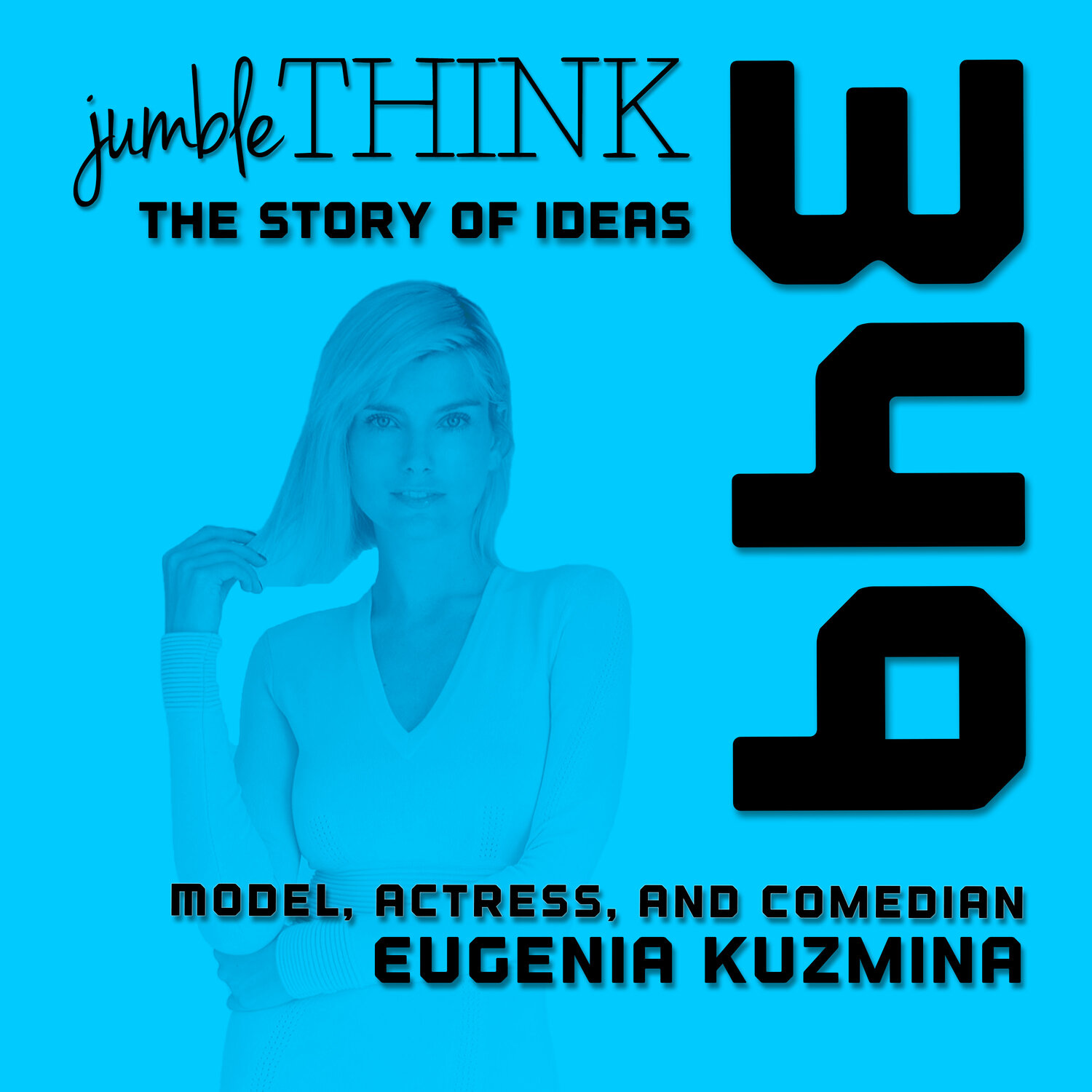 EXCLUSIVE: She’s no trophy wife! Russian model Eugenia Kuzmina tells how she had her first photo shoot at BIRTH, was forced to become her family’s breadwinner at 15 and is now Hollywood’s hardest-working mom after marrying Miramax CEO Bill Block

By Josh Boswell For Dailymail.com

Miramax CEO Bill Block’s Russian model wife started working in Siberia when she was a baby – and is now dubbed Hollywood’s hardest-working mom.

When she’s not raising the movie mogul’s three children and entertaining A-list celebrities at their Los Angeles mansion, Eugenia Kuzmina is jetting to Turkey filming Guy Ritchie’s latest blockbuster Five Eyes with Hugh Grant and Jason Statham, modelling for Chanel, Dior and Hermès, and even impersonating Melania Trump on stage as a stand-up comedian.

In an exclusive interview with DailyMailTV, the Russian model, who was the first woman to have two side by side ad campaigns displayed in New York City‘s Time Square, revealed how she had her first photo shoot just hours after she was born.

Speaking to DailyMailTV from her Los Angeles mansion, Eugenia lifted the lid on her humble beginnings in Soviet Russia where she and her family had to wait for hours every day in food lines

The model-actress is now married to Miramax CEO Bill Block, after meeting him when she was 21. The couple share three children together

‘In Russia they separate mom and child from the moment you’re born for about a week,’ the 33-year-old said. ‘The medical staff took me from the hospital in Ekaterinburg, Siberia, to do a shoot about babies for a Soviet Union newspaper. ‘My mom came looking for me and had no idea they took me for the shoot. So that’s when I started modeling – without consent.’ Kuzmina’s father Igor was a senior nuclear scientist and right-hand-man to Valery Legasov, who led the investigation into the Chernobyl nuclear disaster and was immortalized in the HBO 2019 series named after it. But despite his importance in Soviet Russia, Kuzmina and her mother, also a scientist, had to wait for hours every day in food lines.

She said they were so unfamiliar with western luxuries that when her father returned once from a conference abroad with a can of some exotic treat, they all began tucking in before realizing that it was dog food. ‘I remember seeing American exchange students, which was really rare. We would run after them chasing just to get a piece of gum and chew it for a week,’ Kuzmina told DailyMailTV.  ‘We’d literally put this gum in a glass container because it was such a huge thing.’

After being scouted at 13, Eugenia began landing modeling gigs for L’Oreal and M&Ms. She later got her first big break with Yves Saint Laurent as a teen

Eugenia was born in Moscow, Soviet Union, where her father Igor (pictured) was a senior nuclear scientist and right-hand-man to Valery Legasov, who led the probe into the Chernobyl disaster in 1986

So it was no surprise Kuzmina leapt at the chance for success when she was spotted by a modeling scout on the street at age 13.  Russian designer Vyacheslav Zaitsev took her under his wing and she began appearing in commercials for L’Oreal and M&Ms. She was even scouted for a movie with action legend Chuck Norris – but was unable to film abroad because of government fears she could reveal her father’s cold war-era nuclear state secrets. But when her father died in 2003, 15-year-old Kuzmina was forced to become the breadwinner for her mother and sister, and moved to Paris to become a full-time model.

‘My plan was to come back each summer and do it as a hobby. But when my dad died there was a choice. I knew I couldn’t pursue higher education in Russia. I knew I had a much better chance of supporting my family by pursuing modelling,’ she said. ‘It was my responsibility to be the breadwinner for my family. I had a younger sister who I wanted to help get through college.’ The shy teenager struggled at first in the cut-throat industry, but got her first big break when she inspired legendary designer Yves Saint Laurent in a casting for one of his retrospectives.

Though she could have sat back and enjoyed her husband’s success after his 2017 promotion to CEO, Eugenia said her hard upbringing and struggle to support her family in Russia left her with an internal dynamo

Eugenia was signed to Ford Models when she became pregnant with her first child with Block (pictured). Though the agency said it would end her career, the Russian model carried on working through her pregnancy

‘I walked into this dim lit, smoked room. And behind the smoke appears this gentleman, who’s also very introverted and shy. I think we really related on that. He’s extremely creative, and that sensitivity really resonated,’ she said. ‘He hired me, and I did the show with Naomi Campbell, Claudia Schiffer, Carla Bruni, all the biggest models of the time. It was almost like being a rock star.’ Catapulted into the intensely competitive heights of the supermodel era of the early 2000s, Kuzmina quickly discovered how mean things could get. At one show for Thierry Mugler where she was walking with top models including Ivanka Trump, a jealous rival put broken glass in Gisele Bündchen’s shoes.

‘On the second run, when Gisele was changing she stepped into her shoes very fast. There was a lot of scattered glass in her shoes and she couldn’t walk,’ Kuzmina said. ‘I heard people screaming and saying, “she can’t walk the second look.” It was very chaotic. ‘Gisele always had so much light and personality and energy and always attracted people to her. It’s easy for somebody to get jealous of that.’ Her next big break was signing with Luis Mattos, a top agent who made the careers of Gigi and Bella Hadid and is now head of IMG Models, and moving to New York. Holed up in a penthouse on Wall Street sharing bunk beds with about 15 other models, Kuzmina said she ignored Leonardo DiCaprio’s ever-present limousines waiting to ferry the girls to join him at nightclub VIP tables, instead focusing on her career.

Block is set to produce Guy Ritchie’s latest blockbuster Five Eyes with Hugh Grant and Jason Statham, which was shot in Turkey

But there was one man who caught her eye: her future husband, Miramax CEO Bill Block. ‘I was 21, and wasn’t looking for a husband at the time,’ she said. ‘But my boss [former Ford Models CEO] Katie Ford introduced me to Bill. He was extremely charming, he was a producer at the time. He had all these intellectual ideas about movie making. ‘He had to pursue me for quite a while. He would fly to our shoots in Hawaii, show up there and take care of the whole crew and photographers and take us for dinners. He was such a gentleman.’ After a whirlwind romance Kuzmina became pregnant. Though Ford said it would end her career, the Russian model carried on toiling. ‘I made a commitment. Katie Ford was telling me it’s the worst decision of my life to have kids in the middle of my career. But I said I can do it, if I did it before for myself, I can take care of me and my baby,’ she said. ‘I worked through the whole pregnancy, did all the Gap campaigns and Target.

The workaholic mother of three also decided to add a third career on top: stand-up comedy, including impersonations of Melania Trump

‘I went straight back to work after four weeks because I had a contract with L’Oreal. So I was flying back and forth from Los Angeles to New York with a baby on the red eye.’ Though Kuzmina fit right in entertaining A-listers including Jason Statham, Zac Efron and Arnold Schwarznegger at Block’s LA mansion, her mother had trouble adjusting. ‘Jason Statham is one of the best friends of my husband. They’ve been doing real estate for a long time, he lives next door as well,’ Kuzmina said. ‘When my baby was born he used to come over sometimes to say hi. One time he came over, it was dark, my husband was away and then my mom was there. ‘She doesn’t know anybody in Hollywood. She thought “who is this very intimidating man who is here without announcement?”  ‘And she literally grabbed something to smack him. We had to explain he’s OK, he’s actually not an intruder.’ After moving to Hollywood, Kuzmina launched her acting career and has starred in movies alongside Elle Fanning, Bill Murray, Orlando Bloom and Mila Kunis. The workaholic mother of three also decided to add a third career on top: stand-up comedy, including impersonations of Melania Trump.

Eugenia eventually launched her acting career after moving to Hollywood, and has starred in movies alongside Elle Fanning, Bill Murray, Orlando Bloom and Mila Kunis

The idea came when discussing the former First Lady with Kuzmina’s close friend, photographer Antoine Verglas, who introduced Melania to Donald, traveled the world with her and took the controversial nude photos of the former model. ‘We were talking about it and it came to me that Melania is such a mystery, nobody knows who she is,’ Kuzmina said. ‘She’s a model, she’s married to a powerful man. My husband is very different from Trump, but he has a certain weight to his work.

‘I know Melania’s first agent as well. She said Melania’s only skill is waving from private jets. I thought it’s such an interesting and funny skill. This is definitely comedy writing itself.’ Though she could have sat back and enjoyed her husband’s success after his 2017 promotion to CEO, Kuzmina said her hard upbringing and struggle to support her family has left her with an internal dynamo. ‘After losing my dad I realized we really didn’t have anybody to count on,’ she said.

‘At some points while modeling I couldn’t survive, I had to steal food from backstage at a fashion show. I think I kept that habit for a long time,’ she said. ‘One time I was with my husband and he said, “Why are you putting the rest of that breakfast in your Prada bag?” Old habits die hard they say. ‘Just looking at my mom how much she struggled not working, my goal was always to be self-sufficient and continue working no matter what.’

Inside the vanished world