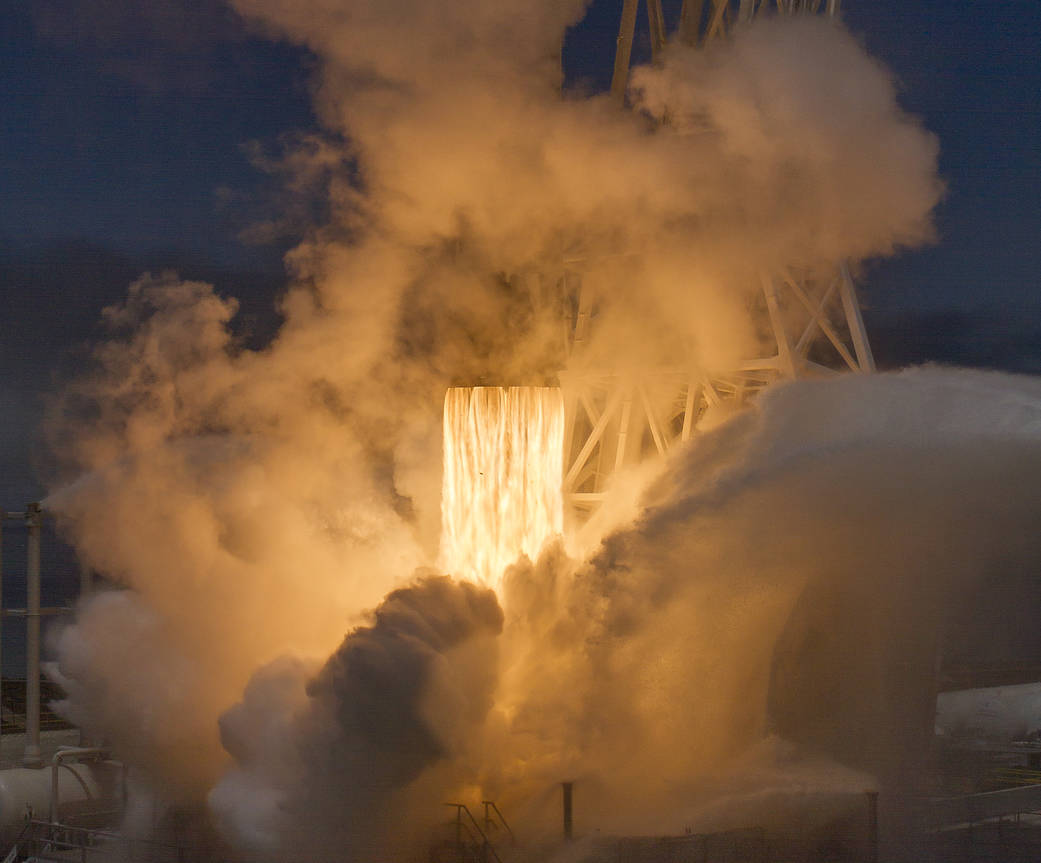 By Ryan Morrison For Mailonline

SpaceX and NASA launched four astronauts from three different space agencies to the International Space Station this morning using a recycled capsule and rocket. The astronauts from the US, Japan and France, blasted off from Pad 39A at NASA’s Kennedy Space Center in Cape Canaveral, Florida at 5.49am EST (10:49 BST) on Friday.  About ten minutes later, travelling at about 10,000 miles per hour, SpaceX Falcon 9 second stage delivered the Crew Dragon and its astronauts into a nominal orbit.  SpaceX successfully landed the first stage of the Falcon 9 rocket on a pad, so it can be reused again in a future mission. Dragon is carrying NASA astronauts Shane Kimbrough and Megan McArthur, the Japan Aerospace Exploration Agency (JAXA)’s Akihiko Hoshide, and the European Space Agency (ESA)’s Thomas Pesquet, who is French.  At about 6.02am EST (11:02 BST) the Dragon capsule, containing the four astronauts, separated from the Falcon 9 second stage and began its journey to the space station. ‘It is glad to be back in space from all of us and we will send our regards to Crew-1 when we get there,’ said Kimbrough.  They are currently orbiting the Earth at about 17,000 miles per hour and will orbit the Earth over the next 23 hours catching up with the ISS before docking.

They are currently orbiting the Earth at about 17,000 miles per hour and will orbit the Earth over the next 23 hours catching up with the ISS before docking

The astronauts will arrive at the International Space Station at about 5.10am EST (10:10 BST) on Saturday, where they will dock and meet the existing crew. They will bring the total number of astronauts on the orbiting laboratory up to 11 until the four members of Crew-1 return to Earth in the following few weeks. The station, orbiting 253 miles above the planet, is nominally designed to hold 7 astronauts, but that can increase when a capsule is docked, such as the Crew-2 mission capsule taking this group to the station.

The astronauts from the US, Japan and France, blasted off from Pad 39A at NASA’s Kennedy Space Center in Cape Canaveral, Florida at 10:49 BST

The sky glows as a SpaceX Falcon 9 rocket, with the Crew Dragon capsule, is launched carrying four astronauts on a NASA commercial crew mission at Kennedy Space Center

The Falcon 9 rocket that flew Crew-1 was used, along with the Crew Dragon Capsule Endeavour that housed Bob Behnken and Doug Hurley in May 2020

The Falcon 9 rocket that flew Crew-1 was used, along with the Crew Dragon Capsule Endeavour that housed Bob Behnken and Doug Hurley in May 2020.

Crew-2 was scheduled to blast off Thursday, but unfavourable weather along the Atlantic coast forced officials to delay it until the early this morning.

It can be a long wait between being seated in the crew capsule and lifting off for the ISS, so while they waited for launch the crew played rock, paper, scissors.

A SpaceX Falcon 9 rocket, with the Crew Dragon capsule, is launched carrying four astronauts on a NASA commercial crew mission to the International Space Station at Kennedy Space Center in Cape Canaveral, Florida

The Falcon 9 rocket that flew Crew-1 was used, along with the Crew Dragon Capsule Endeavour that housed Bob Behnken and Doug Hurley in May 2020

SpaceX founder Elon Musk was spotted at the Florida launch complex to watch the second flight of his Crew Dragon capsule to the ISS.

Megan McArthur, wife of Bob Behnken who flew on the first SpaceX Crew Dragon mission will be seated in the same seat he occupied.

Being assigned to the SpaceX Crew Dragon Endeavour was ‘a neat surprise, and kind of a fun twist on the whole thing,’ said McArthur.

The four astronauts, from three different global space agencies including the US, Japan and France, are scheduled to blast off at 10:49am BST

In this image made from NASA video, astronauts are seen in the cockpit of the SpaceX Crew Dragon spacecraft after lift off for the Crew-2 mission from Launch Complex 39A

Astronauts Shane Kimbrough (R) and Megan McArthur speaking on a microphone in the SpaceX Falcon 9 crew capsule in orbit with the Crew-2 mission on April 23, 2021

WHO ARE THE CREW-2 ASTRONAUTS?

The four veteran astronauts should reach the ISS on Saturday for a six-month stay. They are:

Spacecraft Commander Shane Kimbrough, 53, NASA A retired Army colonel who led a helicopter platoon during the 1991 Gulf War. He taught math at the US Military Academy and jumped out of planes for the Army, before moving to Houston in 2000 to work with NASA´s shuttle training aircraft.  He became an astronaut in 2004, flying on the shuttle in 2008 and launching eight years later in a Russian capsule to the space station he helped build.

McArthur is flying in the same seat as husband Bob Behnken did during SpaceX’s debut crew launch nearly a year ago. It’s been 11 years since she last rocketed into orbit, aboard a shuttle on NASA’s final Hubble Space Telescope repair mission. McArthur conducted graduate research in underwater acoustics at the Scripps Institution of Oceanography, led diving expeditions and tested water equipment. She became an astronaut in 2000.

He was flying for Air France when the European Space Agency chose him as an astronaut 12 years ago.  He joined the French Space Agency as an engineer in 2002. Two years later, Air France tapped him for its flight training program. Pesquet launched on a Russian Soyuz rocket to the space station in 2016 for a six-month mission.

He joined the Japanese Space Agency right out of college in 1992 as an engineer, working on the H-II rocket.  He made the astronaut cut seven years later and helped develop Japan´s Kibo lab for the space station.  He installed Kibo, or Hope, in 2008, launching aboard shuttle Discovery. Hoshide returned to the station in 2012 for six months, flying from Kazakhstan.

The last time three agencies launched for the ISS from US soil was in 2022 on the Space Shuttle Endeavour.  Crew includes spacecraft commander Shane Kimbrough from NASA who is on his third spaceflight and pilot K Megan McArthur, also from NASA on her second spaceflight.  International traveler Akihiko Hoshide of JAXA on his third spaceflight and Thomas Pesquet of ESA on his second flight, will act as mission specialists.  For the first time, Elon Musk’s company is launching astronauts with a previously flown capsule and rocket, just as it’s done for station supply runs. This crew capsule launched with SpaceX’s first crew last May, in what was dubbed ‘Launch America.’ This was the first time in nine years that NASA astronauts launched in an American rocket to the ISS, as well as taking off from US soil.  Behnken and Hurley also blasted off during the early days of the coronavirus pandemic – so the mission brought some hope back to the US and maybe even the world.

Jim Bridenstine, who was the NASA Administrator at the time, said in a May press conference people should pause and look up.  ‘Maybe there´s an opportunity here for America to maybe pause and look up and see a bright, shining moment of hope at what the future looks like, that the United States of America can do extraordinary things even in difficult times.’  The Crew-2 mission is carrying four astronauts in the second routine taxi ride by SpaceX to ISS since the US resumed crewed space flight, and the first with a European – a mission dubbed Alpha by the European Space Agency. ‘This is the third launch in less than a year: Demo-2, Crew-1, and now Crew-2,’ Jurczyk said during a pre-launch media briefing on Wednesday.  ‘I could not be more proud of the NASA and SpaceX teams.’ NASA’s spacecraft commander Kimbrough and his crew will spend six months at the space station, replacing four astronauts who will return next Wednesday in their own SpaceX capsule, parachuting into the Gulf of Mexico near Tallahassee, Florida.

However, during those six months Pesquet plans to dine like a king with a smorgasbord of treats that are unlike any space food before.  The French astronaut is brining along lobster, beef bourguignon, cod with black rice, potato cakes with wild mushrooms and almond tarts with caramelized pears, The New York Times reports. ‘There’s a lot of expectations when you send a Frenchman into space,’ Pesquet said during a European Space Agency news conference last month. ‘I’m a terrible cook myself, but it’s OK if people are doing it for me.’  He and his crewmates will feast on dishes prepared by three separate French culinary institutions, but the meals are only for special occasions.

However, during those six months Pesquet plans to dine like a king with a smorgasbord of treats that are unlike any space food before. The French astronaut is brining along lobster, beef bourguignon, cod with black rice, potato cakes with wild mushrooms and almond tarts with caramelized pears

He and his crewmates will feast on dishes prepared by three separate French culinary institutions, but the meals are only for special occasions. Pictured are chefs preparing the meals for orbit

250 MILES ABOVE THE EARTH

The International Space Station (ISS) is a $100 billion (£80 billion) science and engineering laboratory that orbits 250 miles (400 km) above Earth. It has been permanently staffed by rotating crews of astronauts and cosmonauts since November 2000.  Research conducted aboard the ISS often requires one or more of the unusual conditions present in low Earth orbit, such as low-gravity or oxygen. ISS studies have investigated human research, space medicine, life sciences, physical sciences, astronomy and meteorology. The US space agency, Nasa, spends about $3 billion (£2.4 billion) a year on the space station program, a level of funding that is endorsed by the Trump administration and Congress. A U.S. House of Representatives committee that oversees Nasa has begun looking at whether to extend the program beyond 2024. Alternatively the money could be used to speed up planned human space initiatives to the moon and Mars.