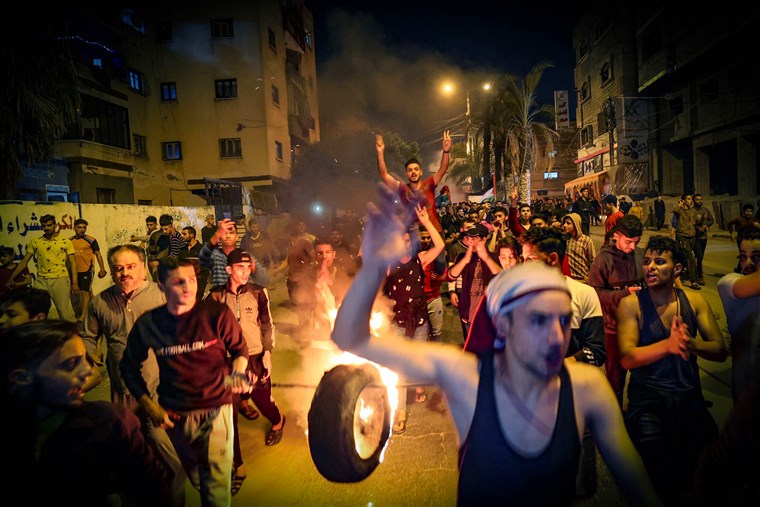 By Chris Jewers For Mailonline and Afp

Israeli police and Palestinians clashed outside Jerusalem’s Old City walls overnight into Sunday as tensions flared during the Muslim holiday of Ramadan, and Israeli Prime Minister Benjamin Netanyahu appealed for ‘calm on all sides’.

But the premier also warned that Israel remains ‘prepared for all scenarios’ after dozens of rockets were fired from the Gaza Strip towards Israel, prompting Israeli retaliatory air strikes.

Thirty-six rockets were launched overnight Friday, the Israeli army said, the most in a single night this year, after Gaza’s Islamist rulers Hamas voiced support for the east Jerusalem protests.

Netanyahu made the remarks after attending an emergency security meeting with senior officials, including army chief Aviv Kohavi, hours after Israeli warplanes struck Gaza early Saturday and a second night of clashes between Palestinians and police in Jerusalem.

‘First of all we want to ensure that law and order are respected… now we demand compliance with the law and I call for calm on all sides,’ Netanyahu said in a statement after the security talks.

The clashes on Saturday evening were less severe than on previous days, according to an AFP journalist at the scene.

After Netanyahu’s comments, the Israeli army said it intercepted another rocket launched from the Gaza Strip on Saturday evening.

There have been nightly disturbances since the start of the Muslim holy month of Ramadan on April 13, amid Palestinian anger over police blocking off access to the promenade around the walls of the Old City and a ban on gatherings.

Pictured: Palestinians chant slogans as they burn tires during a rally in support of demonstrators in Jerusalem on April 24, 2021

Some Palestinians threw stones and bottles as police on horseback dispersed the crowds, though the violence appeared less intense than on previous nights

A march into the heart of Arab east Jerusalem by hundreds of supporters of far-right Jewish nationalist group Lehava added fuel to the fire.

At least 125 people were injured Thursday when Palestinian protesters, angered by chants of ‘death to Arabs’ from far-right Jewish demonstrators, clashed repeatedly with police.

Skirmishes broke out again on Friday when tens of thousands of Muslim worshippers left Jerusalem’s revered Al-Aqsa mosque after night prayers and found themselves confronted by dozens of armed police, some on horseback.

Protesters hurled water bottles at police, who fired stun grenades to disperse them.

The violence was the worst in years between Israeli police and Palestinians in the disputed Holy City.

Protests spread to several cities in the West Bank and along the Israel-Gaza border. The Israeli military said it dispersed hundreds of Palestinians, some throwing rocks and burning tyres

Clashes and violent incidents have occurred almost nightly in Jerusalem – a city holy to Muslims, Christians and Jews – since the start of Ramadan on April 13

‘We uphold freedom of religion… for all residents and visitors of Jerusalem,’ Netanyahu said.

Expressions of concern and calls for restraint have come from the European Union, United Nations and other countries.

The United States, which has taken a more even-handed approach to the Israeli-Palestinian conflict since President Joe Biden took office in January urged ‘calm and unity’.

Hundreds of Palestinians also rallied Friday at the Qalandiya checkpoint between Jerusalem and the occupied West Bank, police said.

In the West Bank town of Bethlehem, Palestinians threw stones and petrol bombs towards the tomb of biblical matriarch Rachel, a shrine venerated by Jews and Muslims.

A member of the Israeli security forces bleeds from his mouth during clashes with Palestinian demonstrators in Jerusalem’s Old City on April 24, 2021

Palestinians say police have tried to prevent them from holding their usual Ramadan evening gatherings outside the gate, where metal barriers have been put up in its amphitheatre-style plaza. Israelis have been angered by videos on social media showing Palestinians assaulting religious Jews in the city. Pictured: Officer points a stun gun at protesters

Jerusalem mayor Moshe Lion told public radio he was in talks with Palestinian community leaders in east Jerusalem ‘to end this pointless violence’ and that he had tried to cancel Thursday’s far-right march. The office of Palestinian president Mahmud Abbas condemned ‘the growing incitement by extremist far-right Israeli settler groups advocating for the killing of Arabs’. Jordanian Foreign Minister Ayman Safadi condemned ‘racist attacks’ by Israelis against Palestinians in east Jerusalem, and called for ‘international action to protect them’. ‘Jerusalem is a red line and touching it, is playing with fire,’ he warned.  Israel’s arch-enemy Iran also weighed in, with foreign ministry spokesman Saeed Khatibzadeh praising Palestinian ‘resistance’ and condemning what he called the ‘Zionists’ savage actions’. UN special coordinator for Middle East peace Tor Wennesland, urged all sides to ‘exercise maximum restraint and avoid further escalation’, adding ‘the provocative acts across Jerusalem must cease’.

Violence spilled over to Gaza overnight between Friday and Saturday, when Palestinian militants fired 36 rockets at Israel soon after Gaza’s Islamist rulers Hamas and other armed groups issued a joint call for Palestinian resistance in Jerusalem

An Israeli soldier escorts a Palestinian woman to safety as Palestinian youth clash with Israeli security forces in the city center of the occupied West Bank town of Hebron on April 24, 2021

Hamas’s military wing, the Ezzedine al-Qassam Brigades, voiced support for the east Jerusalem protesters. ‘The spark you light today will be the wick of the explosion to come in the face of the enemy,’ it said in a statement. An alliance of Palestinian militant groups, including Hamas and its smaller ally Islamic Jihad, issued a statement warning we ‘cannot remain silent’ in the face of the violence. Militants in Gaza fired a first salvo of three rockets at Israel shortly before midnight (2100 GMT) Friday, the military said. Israeli tanks shelled Gaza in response and launched air strikes on the blockaded coastal enclave controlled by the Muslim militant group Hamas after more rockets were fired. Defence Minister Benny Gantz said the army ‘was ready for the possibility of escalation’. The Israeli army said the 36 rockets fired at Israel were intercepted or hit open ground. It said the air strikes, involving fighter jets and attack helicopters, struck Hamas military targets as well as underground infrastructure and rocket launchers. ‘Concerning the Gaza Strip, I gave instructions that we be prepared for all scenarios,’ Netanyahu said.