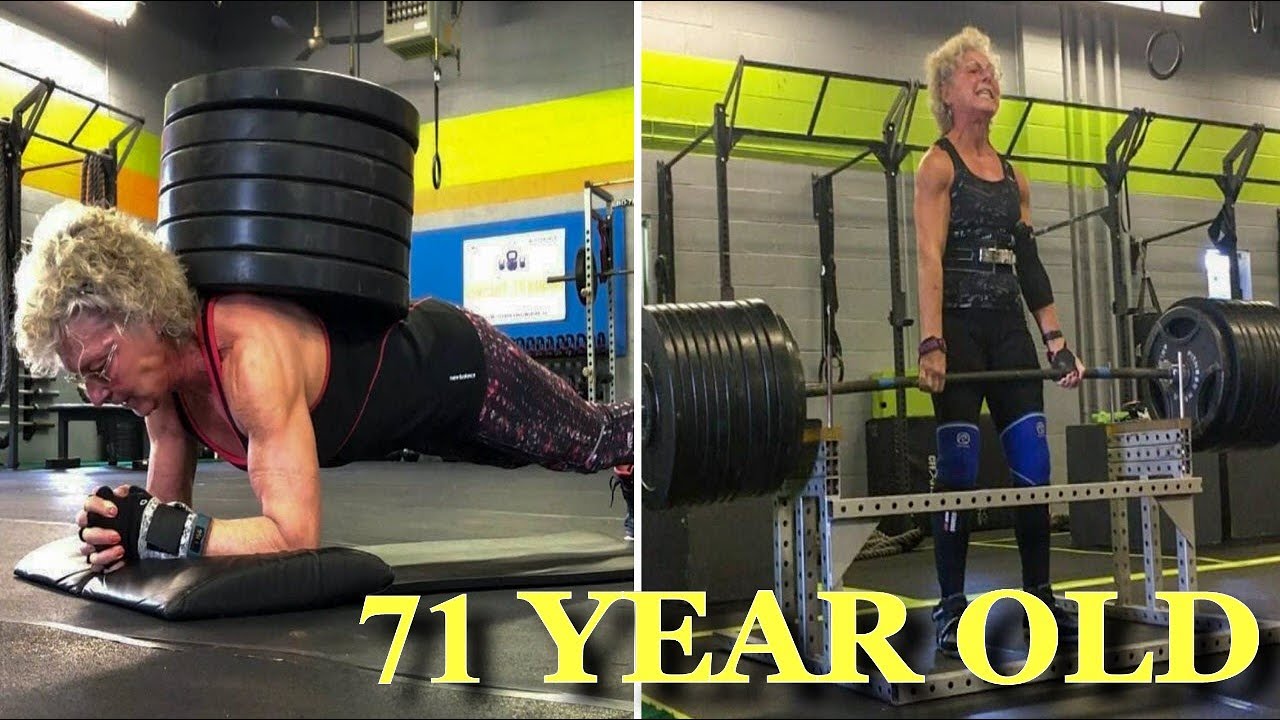 Powerlifting champ, 71, who spends 20 hours a week lifting weights hits back at claims she’s ‘too old’ to be at the gym

MEET one of the world’s toughest grandmas – an international powerlifting champ who says she looks and feels better than she did 30 years ago. Mary Duffy, 71, took up gym work outs aged 59 in a bid to lose weight, and soon got hooked on lifting weights.

Now she spends around 20 hours a week pumping iron and exercising, and has more than 30 state and world records to her name.

The pocket rocket can lift more than many men a quarter her age – but is regularly told she’s “too old” to be hitting the gym.

But she’s proved the doubters wrong, and holds world records for deadlifting 250lb – more than a baby elephant – as well as benching 125lb and squatting 175lb.

The gran-of-one said her up to six hour daily gym sessions means she feels better than she did aged 40.

She has no intention of swapping her lycra leggings and training vests for a twinset and pearls any time soon.

Mary, from Trumbull in Connecticut, USA, said: “I started seriously going to the gym ten years ago when I realized I’d put on a lot of weight – I remember it hit me when I looked in the mirror and thought ‘that’s not me’.

“I quickly lost weight, and realized the more I trained, the more I enjoyed it – and that’s the way it’s been since then.

“I do get people telling me I’m too old for this, but my motto is ‘you can’t turn back the clock, but you can wind it back up’.

“Sometimes I ask myself ‘why am I doing this?’ but the negative comments are outweighed by the people who tell me I inspire them – and that’s what keeps me going.

“I’m not the average 70-year-old – and I have no intention of giving up now!”

Retired Mary, who has been married to Denis Duffy, 76, for more than 40 years, dabbled at the gym in her younger years but didn’t begin taking it seriously until she hit 59 when her mother died.

Mary “sat around feeling sad” for two years following her mother’s death in 2007, and put on weight, reaching 12st 8lb, which she said felt uncomfortable for her small frame.

She said: “I looked in the mirror and saw how big I’d gotten – that was a lightbulb moment for me.

“I remember thinking to myself ‘I refuse to let that be me’ and signed up to join the gym.”

Within a year she’d lost nearly 4st, and her personal trainer Bobby Calabrese suggested she take up weight lifting.

Thanks to two weight-lifting sessions a week, plus cardio and general strength training every day, she got the courage to enter her first powerlifting competition in 2014, aged 64.

She loved it and began entering international competitions run by the International Powerlifting Association twice a year.

Mary has racked up more than 30 state and world records with the International Powerlifting Association, in her age and weight category.

She said: “The more I trained, the more I enjoyed it.

“It can be hard to build muscle when you’re older, but I loved seeing my muscles become more defined as I got stronger.

“Even now, years down the line, I still see myself making improvements – and it keeps me going.”

She also does daily cardio sessions on the rowing machine and cross trainer, as well as additional weight lifting sessions with friends.

Despite training up to six hours a day, she said people often judge her for her age.

Mary, who shares her progress on her fitness Instagram, @mduff2404, said: “I get a lot of people trying to tell me that I shouldn’t be weightlifting at my age – but I just laugh and tell them to check out my records.

“There are times when I wonder why I push myself as hard as I do, for sure, but it’s people’s positive comments that keep me going.

“I don’t want to look like the average 70-year-old grandmother, because I definitely don’t feel like one.

“I don’t think I’ll ever quit powerlifting – not unless I absolutely have to.

“Even if I do stop competing, I’ll still work out and keep in shape.”

‘Boneshakers’, pedal-less ‘hobby horses’ and tyres made from leather: Fascinating book reveals the weird and wonderful bicycles of yesteryear