Hunt for lost artwork from legendary Amber Room is set to begin as divers prepare to search sunken Nazi warship: 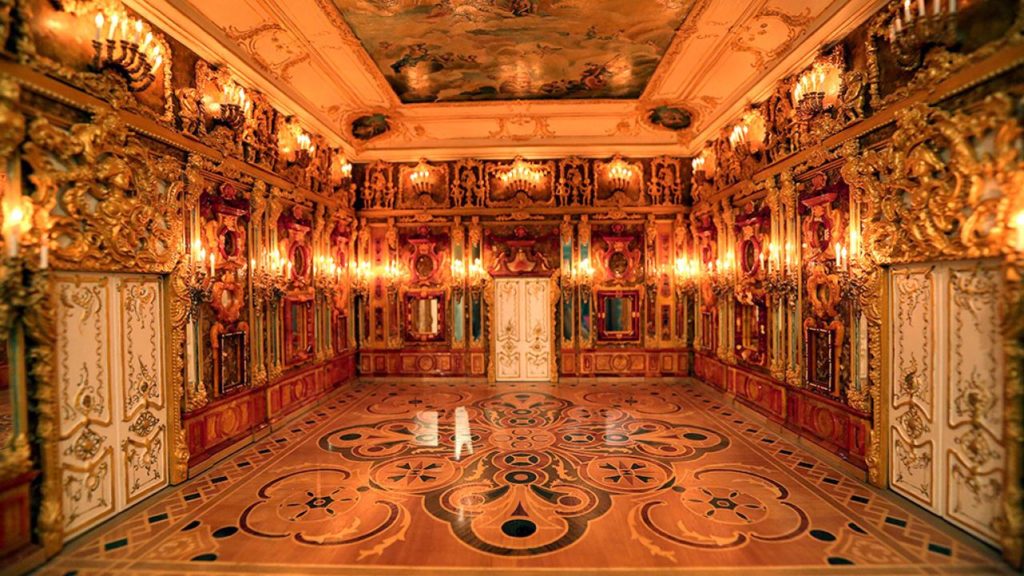 By Ed Wight For Mailonline

Divers hunting for lost artwork from the legendary Amber Room looted by the Nazis are to begin searching a WWII shipwreck at the bottom of the Baltic Sea after photos revealed unidentified paintings and possible artefacts.

The 12-man team from the Baltictech diving group will spend 10 days off the coast of Gdansk, Poland, at the end of May at the site where the German steamer Karlsruhe was sank by a Royal Navy submarine in 1945.

Tomasz Stachura from Baltictech told MailOnline that initial observations of the wreck had revealed several ‘non-military crates’ as well as what appears to be the remains of ‘picture frames and rotting canvases’.

He added that the handles of several crates suggest they could be from museums.

The team hopes to uncover the contents of the lost Amber Room, an ornate chamber of panels made from six tonnes of amber built for Tsar Peter the Great in the 1700s and ransacked by Hitler’s invaders in 1941.

According to the ship’s official cargo documents, there was 360 tonnes of goods on board before it was hit by a torpedo from HMS Truant and scuttled in April 1945.

The Amber Room (pictured in Russia in 1917), which was packed with amber, gold and precious jewels, was looted by the Nazis in 1941 and its contents mysteriously disappeared with the collapse of Hitler’s regime in 1945

Towards the end of the war, as Hitler’s defeat loomed, the 196ft Karlsruhe was used to evacuate Germans in what was called Operation Hannibal from what was then the city of Koenigsberg in East Prussia.

Stachura said: ‘It was in Koenigsberg that the Amber Chamber was seen for the last time.

‘From there the Karlsruhe left on its last voyage with a large cargo.’

The Amber Room was assembled in Russia’s Catherine Palace near St Petersburg and stood there for three centuries, but it was dismantled by German troops during their ill-fated invasion of the USSR.

In 1941, the Amber Room’s contents were placed in storage in Koenigsberg – now a Russian city known as Kaliningrad – and then disappeared when Hitler’s regime fell to ruins in 1945.

The wreck was found lying 288ft below the Baltic in September last year by the Baltictech divers.

Stachura said at the time: ‘It is practically intact. In its holds, we discovered military vehicles, porcelain and many crates with contents still unknown.’

The divers will now document and make an inventory of what they discover.

If anything of interest is found, the Polish authorities will then authorise a state dive to start bringing the crates to the surface.

Stachura added that as the people who died on the ship were German citizens, Germany could declare the site a sea grave, which would make it illegal to disturb it

A ring-shaped object is displayed on the screen after divers carried out a survey of the sea floor following the discovery of the Karlsruhe, a wrecked German steamer, earlier this year

Underwater discoveries: Baltic divers say they found chests and other items and will continue their search in April as they examine whether the wreck of the Karlsruhe could answer the decades-old question of what happened to the Amber Room

The divers said that ‘a lot of items from the ship’s interior have spilled out,’ adding that they had found 10 trunks and ‘lots of other trinkets’ while examining the area of the shipwreck

Polish divers search for the World War II German cruiser Karlsruhe at the bottom of the Baltic Sea, where they believe the lost treasures of the Amber Room – looted by the Nazis and missing since 1945 – could be buried

A clue to the Amber Room mystery? A screen shows a man-made object on the floor of the Baltic Sea where divers searching for the long-lost treasures say that a sonar survey has revealed chests and other objects lying around a wrecked Nazi ship

The ship brought 1,083 refugees and 360 tons of cargo and has been lying 290ft underwater for decades

Divers have discovered military vehicles, porcelain and many crates with so far unknown contents

Documentation from the time suggests that the Karlsruhe left Koenigsberg in a hurry, with a large cargo and 1,083 people on board. Stachura previously said of the ship: ‘She brought 1,083 refugees and 360 tons of cargo with her. She set off on her last journey under a strong escort. ‘Sunken April 13, 1945 in the morning. Only 113 people were saved. ‘We don’t want to get excited, but if the Germans were to take the Amber Chamber across the Baltic Sea, then [the] Karlsruhe steamer was their last chance.’   After discovering the wreck, the divers later said it was too deep to salvage, saying that ‘we started the story but now it’s up to someone else to finish it’.

Stachura said: ‘As archaeological divers, we can only officially dive to 130ft, but the ship is over 260ft down. Military divers could do it but it could cost millions.’ The ship is not to be confused with a different Karlsruhe which was also recently discovered off the coast of Norway, having sunk in 1940.  In 2015, Poland was hit with Gold Train fever after explorers in the town of Walbrzych said they had found a tunnel which they believed was laden with looted Nazi treasure. But after weeks of hype and speculation, when the explorers eventually began digging they discovered the tunnel was empty. The episode has led to a general wariness surrounding claims of stolen World War II treasure being discovered, with authorities wanting ‘real evidence’ to support the claims rather than rumours.  Russian craftsmen have since constructed a replica Amber Room in the Catherine Palace.

Karlsruhe took part in Operation Hannibal, a German naval operation involving the evacuation by sea of German troops and civilians

The ship is not to be confused with the Karlsruhe which was also recently discovered off the coast of Norway, which was sunk in 1940

Tomasz Zwara from Baltictech added: ‘The history and available documentation show that the Karlsruhe was leaving the port in a great hurry and with a large load’

The remains of the Amber Room after it was seized by the Nazis, who packed the amber panels in 27 crates and shipped them to Germany, where they vanished and have not been seen since

The story of the missing Amber Room looted by the Nazis

The Amber Room was originally supposed to have been an amber cabinet, a gift from Friedrich-Wilhelm I of Prussia to Peter the Great, who admired the work on a visit to his castle in 1716. But instead of a cabinet, it was decided to use the panels as wall coverings, surrounding them with gilded carving, mirrors and yet more amber panels.  The room was made up of panels containing six tonnes of amber resin, took 10 years to complete and is valued at some £250million in today’s money.  The 16 feet of jigsaw-puzzle style panels were constructed of more than 100,000 perfectly fitted pieces of amber. In 1755, it was moved to the Catherine Palace at Tsarkoe Selo, 17 miles south of the Imperial Russian capital of St Petersburg.

In 1941, the approaching Nazi army surrounded the city, then known by its Soviet name of Leningrad. Tsarkoe Selo was one of the outlying areas occupied by the Germans. Russians tried to hide the walls behind wallpaper.  But the Nazis knew what was behind the mundane covering, and went about dismantling the room – a process which took 36 hours.   Believing that the Prussian gift rightly belonged to them, they packed the amber panels in 27 crates and shipped them to Germany.  But the contents of the room vanished in 1945 and have not been seen again.

By Ed Wight And Stuart Dowell In Warsaw For Mailonline

A secret network of WWII tunnels thought to contain the long-lost Amber Room or other wartime treasures has been discovered at the site of Nazi Germany’s former eastern army HQ.

The five entrances leading to the previously undiscovered system of underground corridors in what is now northeast Poland, has been described as the biggest discovery ever made at the 200-hectare forest headquarters.

Bartlomiej Plebanczyk from the Mamerki museum bunker complex where the discovery was made told Mailonline: ‘At the moment, based on how the entrances are spaced out, it looks like one of the tunnels is about 50 metres long, but it could be longer.

‘Some of them have been filled in, perhaps in order to hide them, so we will have to remove a lot of material before we can see what is inside them.’

The Amber Room, built for Russian Tsar Peter the Great in the 1700s and packed with amber, gold and precious jewels, was stolen by the Nazis and mysteriously disappeared at the end of the Second World War.

Containing 450g of amber, the Russians had tried to conceal the grand room by covering it in wallpaper, but their plan was foiled.

The precious contents were then taken by the Germans by rail to Koenigsberg Castle, in what was then East Prussia.

Now, the castle is found in the city of Kaliningrad. But it disappeared in January 1945, after air raids and a savage ground assault on the city.

The precious contents were then taken by the Germans by rail to Koenigsberg Castle (pictured in 1900), in what was then East Prussia

Now, the castle (pictured in 1900) is found in the city of Kaliningrad. But it disappeared in January 1945, after air raids and a savage ground assault on the city

For decades, hunters have scoured Europe searching for the missing treasure to no avail. Earlier this month, Amber Room fever was reignited when divers in the Polish city of Gdansk said they were to begin searching a WWII shipwreck at the bottom of the Baltic. Discovered in September last year, the wreck was identified as being that of the German steamer the Karlsruhe which was sunk by the Royal Navy’s HMS Truant in 1945.

According to the 196ft ship’s official cargo documents, there was 360 tonnes of goods on board when it was used to evacuate Germans in what was called Operation Hannibal from what was then the city of Koenigsberg.