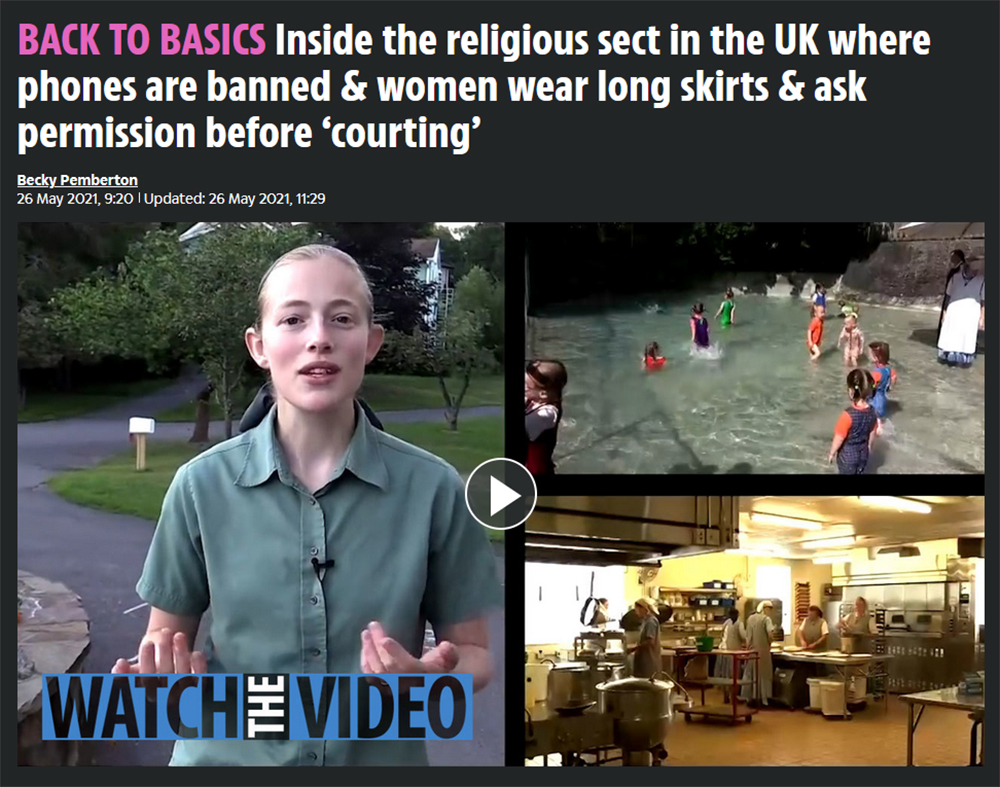 ANKLE-length skirts, no mobile phones and permission needed to “court” – this may sound like Downton Abbey but is actually the way of life in a community in England today.

Nestled on some rural land in a quiet village in Sussex is the Bruderhof community, which has 300 members and a back-to-basics approach to life.

New members have to give up their worldly possessions and finances before joining the radical Christian group.

Rules for women are fairly strict – with their dress code being likened to “peasants in the 1920s”, with high-necked shirts, headscarves and plaid long dresses or skirts.

Speaking on a BBC1 documentary on Bruderhof, a woman from the community explained: “We don’t want anything slinky that will show your figure.

“We should not try and attract attention to ourselves, especially not to the opposite sex. And be modest.”

And the men in the group – who wear contemporary clothes themselves – believe that the strict dress code for women actually helps to protect them.

Community member Bernard told CrossRhythms: “When you’re living in a community like this where we uphold sexual purity, uphold marriage, it is very important.

“I want my wife, all women in fact, to come to work knowing they are never going to be sexually harassed in the workplace.”

We should not try and attract attention to ourselves, especially not to the opposite sex. And be modest.Bruderhof female member

When it comes to dating, community members need to ask permission before becoming romantically involved with the opposite gender.

Teenage “courtship” is banned to “avoid the hurt that comes with dating”, and if you wish to become involved with someone, you must typically wait until after baptism in your early twenties.

One woman told BBC how she was subjected to a “public shaming” after she was caught as a teen with a boyfriend in the 2000s, and her “crimes” were read aloud in front of 200 adults.

The Bruderhof deny using public humiliation as a punishment.

Roles for women in the settlement are as “mothers, nurturers, and homemakers”, but the Bruderhof website adds they can also be “teachers, doctors, sales managers, lawyers, laundresses, and architects.”

However, domestic chores like cooking, cleaning, sewing and laundry are predominantly undertaken by the female members, while men work the land.

Mobile phones, video games and laptops are banned, and entertainment takes the form of swimming in lakes, camping and playing outdoors.

There is plenty of time for social interaction, as the Bruderhofs eat together at least once a day, and at lunch will often sing hymns or listen to a community leader read aloud a children’s story.

Everyone in the community is assigned an unpaid job, be it in the nursery, launderette, or in Bruderhof’s big moneymaker – the Robertsbridge factory.

Surprisingly, the equipment is cutting edge, and includes an impressive machine that creates moulds for the plastic trimmings.

Bernard, who acts as the community’s PR person, told The Sun: “When we design a product it is done so that anyone can assemble it and so there are jobs for those who have lower abilities or are very old.

“It means that people don’t retire. We have people who are 90 who still come and put in an hour of work and they feel fulfilled.”

Profits are shared and used to sustain their lifestyle and the rest goes to good causes, financing their humanitarian work abroad, helping victims of famine, natural disasters, war and violence.

Bruderhof members are free to come and go, and youngsters are encouraged to leave at 18 and spend a year in the outside world, before deciding if they want to commit.

Around a third of teenagers opt not to return to Darvell, which Bernard says is “healthy”.

The 2019 BBC documentary of Bruderhof followed 18-year-old Hannah, as she experienced life outside the commune for the first time.

She said on the show: “As an adult I have to decide where I want to go with my life. At this point the Bruderhof is basically all I have known. I need to know what my other options are.”

Having never been outside the community Hannah, who was sent to a Bruderhof halfway house in Peckham, struggled with the noisy, overpopulated streets of London and was aware her clothing made her stick out like a sore thumb.

Hannah was not a fan of the busy city and was keen to return to the simple way of life, saying: “Seeing the emptiness in people’s lives and how massive the society is I have realised the value in community, the joy of committing your life to something bigger than yourself. It makes you happy.”

The Bruderhof, which stands for “place of the brothers” started in Germany almost a century ago and spread to Britain, the US, Australia and Paraguay.

The community in Robertsbridge, Sussex – known as the Darvell settlement – was established in 1971 but has only recently allowed TV cameras inside.