Inside the vanished world 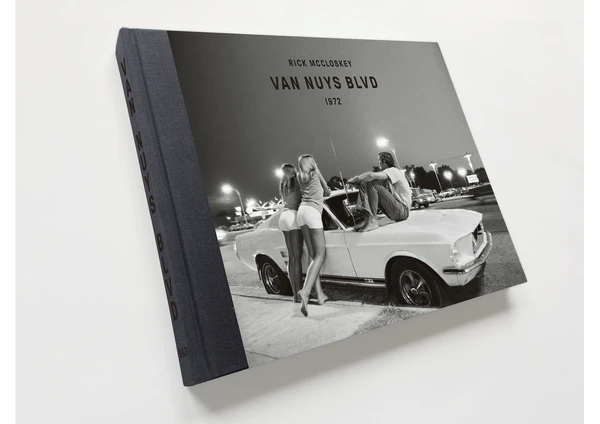 Inside the vanished world of SoCal’s cruising scene when Camaros and Corvettes roared down Van Nuys Boulevard, gas was 33 cents, and barefoot blondes and brunettes sat on hoods during the summer of ’72

In the summer of 1972, Alice Cooper and David Bowie blared from the radio as the country prepared itself for a presidential election later that year. (Incumbent Richard Nixon trounced George McGovern, the South Dakota Senator.) In the San Fernando Valley, teens and people in their early 20s were cruising up and down Van Nuys Boulevard, then they parked and hung out. Photographer Rick McCloskey, who grew up in the Valley, took his camera and chronicled the scene.

‘Every town in America had a strip where kids would take their cars and go hang out whether it was only a block long – big towns, little towns, cities. It was really a thing for everybody to be involved at some point,’ McCloskey told DailyMail.com. ‘This particular picture. This is the one that says it all,’ McCloskey said of the above image.

‘This picture of the Mustang and the barefoot gals and the white shorts and the guy sitting on the hood. That’s Southern California’.

Cruising really took off during the post-war economic boom in the 1950s and lasted until about 1980, according to McCloskey. (During the 1940s, there was some cruising but it wasn’t widespread.) For decades, young people worked on their cars in their garages and then showed them off while driving down the strip. There were also specific spots where people parked and hung out. Above, a customized Pontiac with a groovy paint job. McCloskey recalled the car’s owner was off to the side getting a ticket. ‘In the meantime, I’m photographing his car and his girlfriend,’ he said. ‘She was used to having her photograph taken with this car’.

‘That’s what the boulevard looked like all the time – at least on Wednesday night,’ McCloskey said of the above image. By the time he was documenting the scene in 1972, anything went as far as vehicles were concerned and people drove what they owned down the boulevard: hot rods, 1940s and 1950s vehicles, Volkswagens and Toyotas,’ he said. ‘You saw this transformation of what kind of cars people drove. … there was a range of like 40 years of automobiles’.

This image highlights the price of gas in the summer of 1972. McCloskey said there were stations selling gas for 29 or 30 cents. The decade would see two oil crises: one in 1973 and another in 1979. This put a damper on the market for big-engine muscle cars and was one of the factors that led to the decline of cruising.

‘Here it is: Perfect – couple of gals barefoot,’ McCloskey said of the above image, adding that the car is a 1971 Camaro. ‘I didn’t go barefoot. I was doing a lot of shoe leather taking these pictures. I’d walk for miles.’ Since it was Southern California, it wasn’t unusual for people to be without shoes while hanging out. McCloskey, who grew up in the San Fernando Valley, recalled: ‘The nights were long and beautiful. How do you beat it? Gee. I’m glad I was able to be part of that as a kid. It was really a formative experience’.

Here, a classic Volkswagen Beetle, center, on Van Nuys Boulevard. McCloskey said he took this image while the cars were at a stoplight. He ran across the road, stopped and snapped. ‘I was in the crosswalk. I would have been dead otherwise,’ he joked and then laughed. He noted the Pintos to both the right and left of the Beetle. ‘What I liked about that picture was it was just this sweep of down the boulevard and the lights.’ He noted that it was downtown Van Nuys, which was founded in 1911 and named after Isaac Van Nuys, who settled in the area in the 1870s and was a prominent landowner.

The Capri Theater, shown above with The Godfather on its marquee, was an important touchstone for people who grew up in the San Fernando Valley, said McCloskey, who went there as a kid for Saturday afternoon matinees. When he took the picture, the theater was still doing fine, but it is no longer in business. ‘I loved the neon and the fluorescent lights… And I love The Godfather part of it.’ The film, which was released in March 1972, was the highest-grossing movie that year.

While Van Nuys Boulevard was the place for cruising, throughout the years there were different locations where teens could park and hang out. When McCloskey was in junior high school, the spot was Bob’s Big Boy. He told DailyMail.com: ‘Cars would line up on Wednesday night and Friday night and Saturday night. They would be lined up on two streets waiting to get … car hop service.’ Later on, it was June Ellen’s Donuts. Pictured: A young woman smiles while she and her friend hang out on the side of the road.

Here, three young women enjoy the southern California weather during a cruising night on a stretch of Van Nuys Boulevard. ‘There was room to park, lots of lights and a good spot to get shots of people,’ McCloskey said. He noted that, at the time this image was taken in 1972, it was still legal to ride in the back of trucks, which is no longer permitted in the state. The three are hanging out in a Nissan Datsun, and McCloskey pointed out: ‘Before 1968, you would never have seen one of these’.

Americans’ love affair with the automobile began in earnest after World War II. During the war, companies like Chrysler and General Motors stopped manufacturing cars and turned to defense work. After the Great Depression and the war, people wanted new cars during the booming economy of the 1950s. McCloskey said of the above image: ‘You got a good cross section of a whole bunch of cars coming at you – new ones and old ones. There’s even a bus coming down the boulevard. That boulevard was busy on a Wednesday night’.

In the 1950s, as people bought new cars, they were selling their older models that they had clung to during the Great Depression and the war. ‘So the kids got these cars for $10 or $20 dollars. Things were cheap. You could do this in your garage or driveway,’ McCloskey explained about renovating the vehicles. After restoring, upgrading and painting these older cars, people needed to show them off and cruising on Van Nuys Boulevard took off. McCloskey said that he took the above image in June Ellen’s Donuts parking lot, which was a spot where people parked and turned around while cruising. He said: ‘This gal just looks so Hollywood to me’.

McCloskey estimated that he took about 4,000 photographs the summer he chronicled cruising. ‘It’s a really large series,’ he told DailyMail.com. ‘At this point, they’re almost 50 years old and I look at these pictures and I go, “Gosh, this seems like yesterday.”‘ About a fourth of the images have been digitalized, he said. Pictured: A woman and man sit on top of a Corvette, which McCloskey pointed out wasn’t painted, calling it a work in progress. A line of cars on a cruising night can be seen behind the pair.

During the project, McCloskey said that he wasn’t using flash. A friend who also tried to take photos of the cruising scene did so and people got upset. ‘The reaction to using flash just kind of killed the whole thing and caused people to not like having their picture taken,’ he said. Often, McCloskey made a point of letting people see him approach with his camera before he took an image. He sometimes waited for the instant when someone made direct eye contact with his camera, as seen above. ‘This little blonde gal and this guy,’ he said. ‘I have several pictures of the kids sitting around there. … This is one where she looks right at me’.

Van Nuys Boulevard was a ‘jumping place’ when McCloskey cruised in high school in the early 1960s, but after he graduated, there was a bit of a lull in the middle of the decade. ‘Around about 1965, the Vietnam War came along and began to change the tone and tenor of cruising,’ he said. ‘It still occurred, of course, but it was one of those things at that time where young people quickly switched over to smoking pot and hanging out at apartments.’ By the time the summer of ’72 rolled around, the war was winding down and the draft would officially end in January the next year. And there was a cruising resurgence, McCloskey said.

After the project, McCloskey moved to Hawaii and eventually settled with his family in Lakewood, Washington. He currently restores a type of classic car known as a Woodie. ‘I earn my living by working in a wood shop building wood bodies for 1949 to 1951 Ford and Mercury station wagons.’ He recalled shooting a number of photos at the gas station seen above. McCloskey said: ‘For the most part, the experience of the people on the boulevard was a positive one, at least for the young people. They were there to have a good time and they did’.