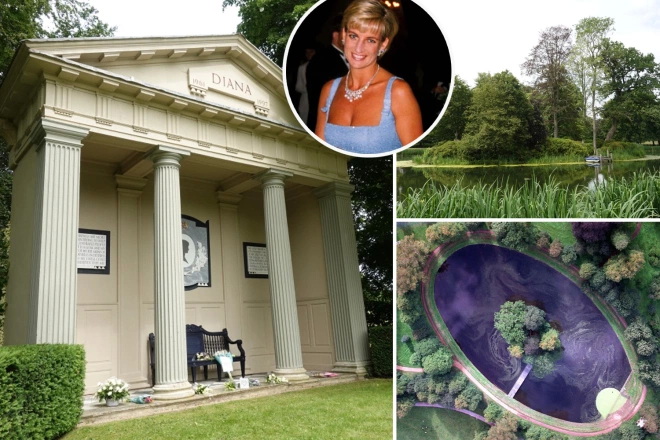 THE nation came together to pay tribute to the beloved Princess Diana yesterday on what would have been her 60th birthday.

And these stunning photos reveal her tranquil final resting place at her childhood home, Althorp House in Northampton.

The People’s Princess died in a car crash on August 31, 1997, leaving behind sons Prince William and Prince Harry, who unveiled a statue in memory of her at Kensington Palace yesterday.

The brothers poignantly said: “Every day, we wish she were still with us, and our hope is that this statue will be seen forever as a symbol of her life and her legacy.”

Surrounded by rolling, lush grounds, Diana’s grave is peacefully nestled on an island nicknamed the Oval in the middle of an ornamental lake.

Stunning shots show the crystal clear lake protecting the grave that was not originally intended to be her burial site – but her brother Earl Spencer said in 2017 it was the “safest place” for her to be rested.

The peaceful spot is regularly visited by William, 39, and Harry, 36, along with thousands of adoring fans who flock to the estate each summer.

Diana was originally supposed to be buried in the family’s vault at the local church in Great Brington.

However, the lake grave was eventually chosen to defend the late princess’ remains from “ghouls” and to keep it safe from intruders.

In 1998 Earl Spencer said the water would “act as a buffer against the interventions of the insane and ghoulish with the thick mud presenting a further line of defence.

“We all agreed that, with its beauty and tranquillity, this was the place for Diana to be.”

Despite the spot being picked for security reasons, he admitted to BBC Radio 4 that there have been “four attempted break-ins over the past 20 years” since she passed away.

When did Princess Diana die and how old was she?

When was Princess Diana’s funeral and what have Prince William and Prince Harry said since?

Princess Diana engagement ring and jewellery: What happened to her collection?

Princess Diana young pictures: What was Lady Diana Spencer like as a child?

Princess Diana car crash: What happened in Paris in August 1997?

Why was Princess Diana in Paris when she died?

Princess Diana birthday: How old would she be today?

Where is Princess Diana buried and can you visit her grave?

When did Princess Diana and Prince Charles get divorced?

Diana grew up on the 13,000-acre Althorp estate, which now features 36 oak trees that were specially planted to represent each year of her life.

Princess Diana‘s family, the Spencers, have owned the Althorp Estate for over 500 years, with Diana calling the estate home before her marriage to Prince Charles.

She grew up there with her siblings Lady Sarah McCorquodale, Lady Jane Fellowes and her brother Charles, the 9th Earl Spencer, and could often be found as a child tap dancing on the hall’s black and white marble floor.

In his speech, the earl said: “Diana was the very essence of compassion, of duty, of style, of beauty.

“Someone with a natural nobility who was classless and who proved in the last year that she needed no royal title to continue to generate her particular brand of magic.”

Well-wishers are able to pay tribute to the princess by visiting a memorial by the lake, and many like to lay flowers as a sign of respect.

Diana was buried on Thursday September 6, 1997, and hundreds of visitors pay homage to the beloved royal each year on this date.

The site was recently renovated as part of an 18-month project, which is said to have been “the first major revamp of the gardens in 350 years”.

A round of applause echoed around the garden – a favourite place of Princess Diana’s – as the statue was shown for the first time.