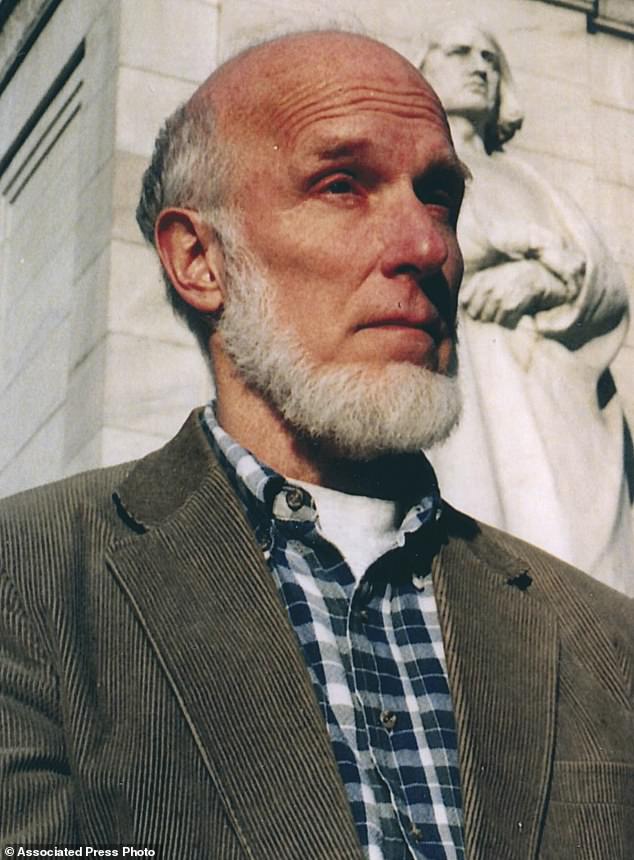 The author of a smash-hit history book which aimed to debunk the truth about the history of the United States has died of bladder cancer aged 79. James W Loewen succumbed to the disease at Suburban Hospital in Bethesda, Maryland, on Friday, his publisher New Press announced Friday. A spokesman for the author, who was also a professor emeritus at the University of Vermont, said: ‘Telling the truth about the past helps cause justice in. the present. Achieving justice in the present helps us tell the truth about the past.’ Loewen, who lived in Washington DC, was diagnosed with stage four bladder cancer in 2019, and began compiling his own obituary to try and ensure his life was accurately reflected after his death. A note on Loewen’s website says: ‘Having received a diagnosis in 2019 of muscle-invasive metastatic bladder cancer, Stage IV, with a prognosis of just below 1% survival after three years, he started putting his affairs in order. One part was writing ‘Notes Toward an Obituary,’ which he thought he would share with his hometown newspaper, the Washington Post

Author James W Loewen, who shot to fame with Lies My Teacher Told Me – a tome which sought to debunk history told in popular US text books – has died of cancer aged 79  ‘After all, he had written for them, and one of his articles had wound up the most viewed article for the year. Right after he finished, an obituary writer for the New York Times called, apparently having heard of his prognosis, and was pleased to get the notes. But the WaPo obituary writer had no use for them. ‘They have a much larger staff than we do,’ she said. Sigh. So I decided to share directly with you.’ The nine page document ultimately compiled by Loewen documents his life and professional achievements.  Loewen’s ‘Lies My Teacher Told Me: Everything Your American History Textbook Got Wrong’ was published in 1995 and became a favorite of students and former students as it challenged what Loewen considered a white, Eurocentric view of the past and the stale prose and bland presentations of classroom books. He based his findings on his research while on fellowship at the Smithsonian Institution, where he spent two years looking through textbooks.  He gave his chapters such headlines as ‘The Truth About the First Thanksgiving,’ ‘Gone With the Wind: The Invisibility of American Racism in American Textbooks’ and ‘See No Evil: Choosing Not to Look at the War in Vietnam.’ Loewen prided himself on pointing out the socialist beliefs of Helen Keller or the diversity of American Indian culture. He chastised textbook authors for ignoring the history of labor unions and leaving students with the impression that the mistreatment of workers was something ‘that happened long ago, like slavery, and that, like slavery, was corrected long ago.’

Lies My Teacher Told Me was first published in 1995, and quickly proved a smash hit among progressives keen to hear an alternative side

In a 2018 interview with NPR, he said that inspiration for ‘Lies My Teacher Told Me’ came while he was teaching at the historically black Tougaloo College in Mississippi, and asked his students for their thoughts on Reconstruction. ‘And what happened to me was an ‘A-ha’ experience, although you might better consider it an ‘Oh-no’ experience: 16 out of my 17 students said, ‘Well, Reconstruction was the period right after the Civil War when Blacks took over the government of the Southern states. But they were too soon out of slavery and so they screwed up and white folks had to take control again.’ ‘My little heart sank.’ Loewen’s book won the American Book Award and was sometimes likened to Howard Zinn’s ‘A People’s History’ as an alternate text for progressives. A Publishers Weekly review called ‘Lies My Teacher Told Me’ a ‘politically correct critique of 12 American history textbooks’ that was ‘sure to please liberals and infuriate conservatives.’ He continued the series with ‘Lies My Teacher Told Me About Christopher Columbus,’ ‘Lies Across America: What Our Historic Sites Get Wrong’ and ‘Lies My Teacher Told Me: Young Readers´ Edition’ and revised the original work in 2018, during the Donald Trump administration.  His other books included ‘Teaching What Really Happened,’ ‘The Mississippi Chinese: Between Black and White’ and the memoir ‘Up a Creek, With a Paddle.’ The New Press will publish a graphic edition in 2023 of ‘Lies My Teacher Told Me,’ which Loewen had been working on with artist Nate Powell, who had collaborated with Rep. John Lewis on his acclaimed ‘March’ graphic trilogy.

In 2018 Loewen published the acclaimed Sundown Towns, which told the story of US locales where black residents had been ordered to leave by sunset by racist neighbors

Loewen is survived by his second wife, Susan Robertson Loewen; children Nick Loewen and Lucy Loewen McMurrer; four grandchildren and his sister, Mary Cavalier. ‘Fathering was his happiest role,’ Loewen wrote in his prepared obituary. He was born in Decatur, Illinois, his father a doctor and his mother a teacher and librarian. While studying sociology at Carleton College in Northfield, Minnesota, during the height of the civil rights movement, he spent the early part of 1963 auditing courses at Mississippi State University, while also visiting Tougaloo College and the Tuskegee Institute. ‘He enjoyed all three Southern colleges but felt a particular kinship with Tougaloo, where students actually bought and read books not assigned them in courses, a rarity at MSU,’ Loewen wrote on his website. Before establishing himself as an author, Loewen co-wrote a textbook which helped lead to a legal battle that anticipated current debates over how race should be taught. In 1974, he and Dr. Charles Sallis published ‘Mississippi: Conflict and Change,’ an intended corrective to what they saw as the racially biased information that his Tougaloo students had been assigned for a required 9th grade course on the state’s history. The book won the Lillian Smith Award for nonfiction, presented by the Southern Regional Council, but officials in Mississippi voted to reject it for classroom use, alleging that ‘Mississippi: Conflict and Change’ devoted too much time to black history.  Loewen and others sued. In 1980, U.S. District Court Judge Orma Smith ruled in the plaintiffs’ favor and ordered the book placed on the ‘approved list.’